The particular headphones that you choose for your audio system have the most significant impact on sound quality. A headphone amp is a useful device that ensures that you get the best possible listening experience.

If you are listening to the audio on a laptop, computer, tablet, or phone, a headphone amp can significantly improve the sound quality. This improvement is due to the superior digital-to-analog processing that is installed within the amp’s outboard DAC.

Despite their ability in this field, improving sound quality is not the main purpose of a headphone amp.

The improvements in this area are a by-product of the amp’s primary interactions with headphones. The main purpose of headphone amps is to provide the ideal amount of power for the headphones to function. 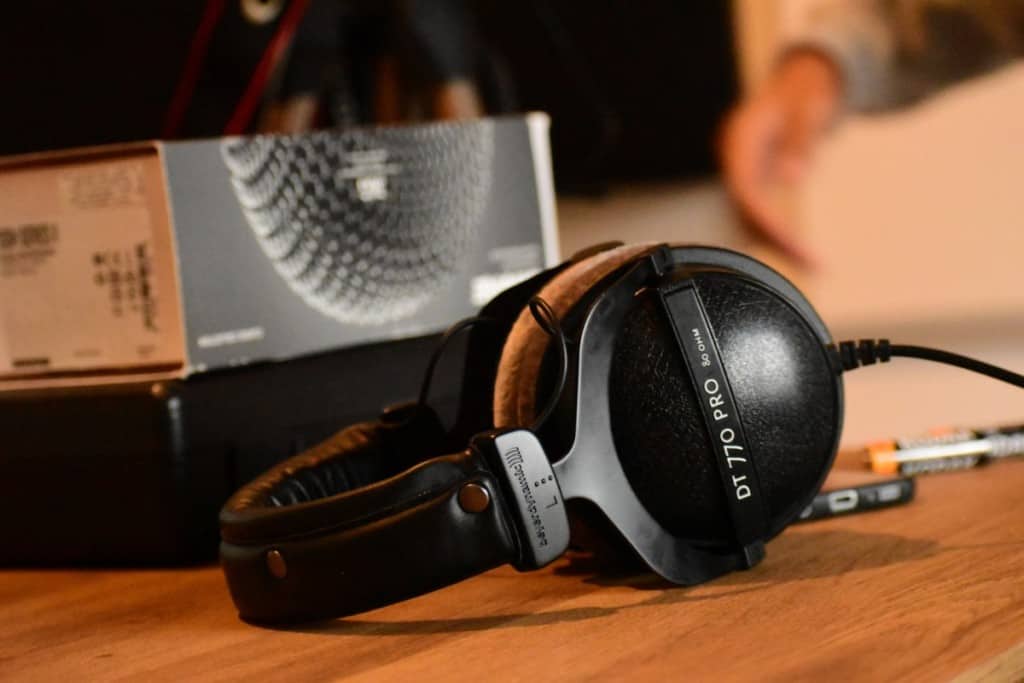 Headphone amps provide a plethora of benefits when it comes to audio playback.

As their name suggests, they mainly focus on amplifying the signal before it reaches the headphones, creating the perfect amount of power to maximize efficiency. As a result of this process, sound quality can improve dramatically.

Check out this popular headphone amp here on Amazon

The improvement of sound quality is an arguably subjective matter, in that what is deemed to be “better” by one listener may be less desirable to another.

So when it is stated that headphone amps improve sound quality, it’s important to keep in mind that we are discussing two main factors: clarity and coloration.

When audio signals are sent from a sound source, for example, a laptop or smartphone, the signal is presented digitally.

For the headphones to successfully play the audio, it needs to be converted into an analog signal. The device that is responsible for this is known as a DAC (digital-to-analog converter).

One of the ways that a headphone amp can improve the sound quality is through this conversion process.

Although most sound-playing devices have inbuilt DACs, the ones found in external headphone amps are usually more sophisticated and effective at the role they perform.

The process of coloration occurs due to the primary function of a headphone amp.

It aims to provide adequate gain for the sound source to play audio at an audible level, and should not inherently change the waveform when doing so. However, some headphone amps have high output impedance, which causes their frequency response to be applied to the waveform, thus adding color.

Whether or not coloration improves sound quality is a question that will evoke a different answer depending on the listener’s preference.

Take a look at this great video from PS Audio on setting up a headphone amp.

Each headphone amp, especially those with higher-than-average output impedance, will color the audio in its unique way. Much like preamps used for recording with microphones and instruments, there is a wide variety of colors presented by these devices.

It could be argued that these devices improve sound quality more than a high output impedance option because they operate with minimal distortion and simply amplify the original signal without adding any color to the output.

Some listeners will prefer the slight coloration added by a high impedance output headphone amp, while others will enjoy the cleaner, more natural sound of their low impedance counterparts.

Both could be argued as being improvements on the original sound quality, so it comes down to personal preference in this instance.

I have written an article called “Are expensive headphones worth it” You can read it here.

As I previously mentioned, one of the most integral components within a headphone amp is the DAC.

This device is performing the vital function of transforming digital data into analog waveforms, making it possible for audio to be played back by headphones or speakers.

So what exactly is a DAC, and how can it improve sound quality?

DACs are not only featured in headphone amps, they are also present in every device that is capable of audio playback. We use them daily, but many people aren’t even aware they exist.

Before the sound enters an amp and subsequently a pair of headphones, it is presented in the form of a series of 0s and 1s. This is a digital signal, and at this point it is inaudible. The DAC takes the audio as it enters the headphone amp, and converts the 0s and 1s into an analog waveform that is audible to the human ear.

Most devices have their inbuilt DACs, but they aren’t always built to a high standard.

That’s why using a good-quality headphone amp with a specifically-chosen DAC is likely to improve sound quality. When you use the amp, the inbuilt converter in the laptop, phone, or other device is bypassed.

The high-quality converter within the headphone amp performs faster and more efficiently, and improving the sound quality as a result.

Most of the good quality options do, but some will require you to purchase an external DAC that connects to your playback device separately from the amp.

Standalone DACs often house simplistic controls and come in the form of a USB-connectable box. Headphones can sometimes be connected straight into a DAC, but it’s advisable to use a headphone amp in addition to getting the best results.

Take a closer look at them here on Amazon

One of the main attributes that affect a headphone amp’s ability to improve sound quality is its impedance level. Generally speaking, two types of impedance are likely to come up when discussing audio: output impedance and load impedance.

Load impedance describes the impedance of the headphones, whilst output impedance is relevant to headphone amps.

Usually, headphone impedance falls somewhere in the region of 10-600 ohms. The most common impedance rating is 32, as this has become somewhat of a standard number amongst manufacturers.

On the other hand, the impedance from a headphone amp is likely to be much lower, at around 4 ohms or in some cases 0 ohms. However, there are lesser quality headphone amps that have much higher output impedance, and this is usually reflected in the sound quality.

To ensure the highest possible sound quality, a process is known as “impedance matching” must occur. This term describes how the output impedance and the load impedance interact with one another. Put more simply, it is how the power of the headphone amp and the pair of headphones match up.

Sound quality is dramatically improved when these two impedance levels are complementary to each other. It doesn’t mean that the number must be the same, that would be too simple!

If a pair of headphones has low impedance, which is anything below 50ohms, they are most compatible with portable devices rather than headphone amps. They will still experience some benefits of the interaction, but the improvement in sound quality is likely to be less noticeable.

If headphone amps have a high impedance output and you connect a low impedance load, two undesirable results will occur.

Firstly, there is likely to be an increase in distortion. Indeed, when used intentionally, some would argue that a little distortion can improve sound quality and tone. When it is created unintentionally, however, it is more likely to hinder the overall quality.

This is reflected in the changes of frequency output in the headphones. The interactions with the source are likely to be unpredictable, and detrimental to the overall sound quality.

The table below displays the power impedance of certain headphone amps:

It’s very unlikely that phantom power will damage a pair of headphones. Most interfaces have separate headphone outputs which are independent of the channels where the phantom power is present.

Can too much volume or gain damage headphones?

It’s a common misconception that high volumes will damage headphones. The internal speakers are designed to cope with the maximum volume they can produce. High volumes can damage your hearing, though, so it is not advisable.

I hope this clears up any questions you had about headphone amps thanks for stopping by!