Headphone amps and sound cards are two extremely useful devices for audio playback. They both improve sound quality, and the overall listening experience in several ways.

For audio playback from a computer or laptop, sound cards work better than any other device. Without one, there would be no audio produced. Headphone amps are not as vital, but they are specifically better at preparing the signal for playback.

To definitively answer this question, there are several factors we need to consider.

Headphone amps provide various benefits that are directly related to audio playback through a pair of headphones, whereas sound cards essentially make sure that an audio signal can be played back in the first place.

In this article, I’ll compare the two devices and the purposes they serve.

Headphone amps and sound cards both work best for varying functions, although there are some crossover capabilities that both possess. When discussing audio quality, this is a difficult criterion to compare the two devices on, as they vary from model to model.

Generally speaking, if a sound card is capable of outputting the same voltage level as a headphone amp, then sound quality should be the deciding factor when determining which works best. The question is, how do you determine which sounds best when that is a subjective judgment?

Sound cards are often not given the credit they deserve. Perhaps this is because they are mainly inbuilt devices, unlike headphone amps or preamps, which are external.

All computers and laptops must have sound cards installed; otherwise, they would be incapable of audio playback. The average computer or laptop user is unlikely to ever need to replace their sound card, and for that reason, many take them for granted.

In reality, though, sound cards are vital if you want to play any audio through speakers or headphones from your computer or laptop. Whether you’re a music producer, gamer, or simply enjoy listening to music or podcasts on your device, the sound card makes it possible.

Check out the incredible Beyerdynamic DT990 Pro Headphones that come bundled with a headphone amp! (pictured above) here on Amazon

One of the main functions of a sound card is to convert the digital signal that the computer or laptop generates, into an analog waveform.

Headphones and speakers are incapable of playing digital signals, as they consist of a series of 0s and 1s. Analog waveforms contain audio data that can be played by these devices.

It could be argued that headphone amps are less vital than sound cards, because a computer or laptop can play audio without the former, but not without the latter.

However, headphone amps do offer some advantages that sound cards are simply incapable of producing. While a soundcard can power headphones effectively, it doesn’t house the various options that come with a headphone amp.

Headphone amps are specifically designed to provide the optimal power for the device.

They take the signal that has been converted from digital to analog by a device called a DAC and amplify it so that the headphones can successfully play the audio. This precise amplification often results in a well-rounded, fuller sound than an average soundcard can produce.

Another argument for why headphone amps work best is the added functionality in comparison to sound cards.

Headphone amps are often fitted with many tone-sculpting and dynamic-altering parameters. For example, there may be controls for boosting bass frequencies, adding gain, and in some cases even compressing the sound.

Some headphone amps also have inbuilt presets so that you can quickly tailor the output to suit a certain style of audio playback. Additionally, a good headphone amp will allow you to isolate separate channels and create independent headphone mixes, which is very useful for recording music.

When comparing which device works best, we need to consider the desired purpose of the individual.

Do you require more control over the output of your headphones? Or are you content with simplistic playback? In the following sections, we will delve deeper into the different qualities of both these devices.

I have written an article called “Is a soundcard an audio interface” you can find it here.

Here’s a summary of the main capabilities of headphone amps and sound cards:

Headphone amps, along with DACs, are featured in every device which offers a headphone jack output.

Smartphones and audio interfaces both have headphone amps installed, and these devices are responsible for boosting the signal level to ensure that it can be received by the headphones.

The main reason that headphone amps are popular amongst music producers and audiophiles is the improvements in sound quality that they offer. A high-end amp can make a mediocre pair of headphones sound much better.

Take a look at this popular headphone amp on Amazon.

Another area that headphone amps work better than sound cards at is raising the volume. Even if you don’t require an extra dynamic boost to make your headphones louder, the capability to do so will also have a positive effect on sound quality.

Some songs have sonic peaks, which are presented within the audio waveform.

These peaks, if handled by a low-quality soundcard, can cause distortion and the overall clarity will suffer. Headphone amps are designed to handle the peaks and combat any unwanted saturation. They often have gain controls or primitive EQ units which allow you to manually adjust the dynamic and tonal response to keep clarity to a maximum.

Some come with built-in DACs, which take care of the conversion from digital to analog. They may also offer balanced outputs for XLRs, digital outputs and inputs, ground switches, and USB connectors.

Sound cards, on the other hand, are usually built into the motherboard of the computer.

They are available in external formats, but these varieties are rarer. A sound card offers no additional connectivity options other than its ability to slot into the designated space on the computer or laptop’s motherboard.

The advantage of using a sound card is mainly the convenience they offer.

Being predominantly internally installed, they require very little maintenance. Once they are slotted in, they instantly work without having to tweak any settings or levels. The only thing you may need to do when using a sound card is install the required drivers, but this only takes a few minutes.

You can, of course, alter the output from the sound card using audio mixing software on your computer. There are basic versions pre-installed into the device, or you can purchase more sophisticated software to provide you with more options.

Check out this video that explains what a headphone amp is and how to choose the right one for you.

Now that we’ve discussed the various pros and cons of both devices in detail, it’s time for you to establish which is likely to work best for your needs.

If you are someone who needs high-quality audio playback through your headphones, then there’s no question what works best for that – headphone amps.

If, on the other hand, you are quite happy with the audio quality produced by your computer and don’t require any additional controls to tailor the output of the headphone’s speakers, you can save time, money, and effort by sticking with a sound card.

Headphone amps are not exclusive to stationary listening. There are many great portable headphone amps which are usually powered by USB, and allow you to receive the benefits on-the-go. A sound card, however, is always connected to your laptop or computer and is, therefore, less mobile. 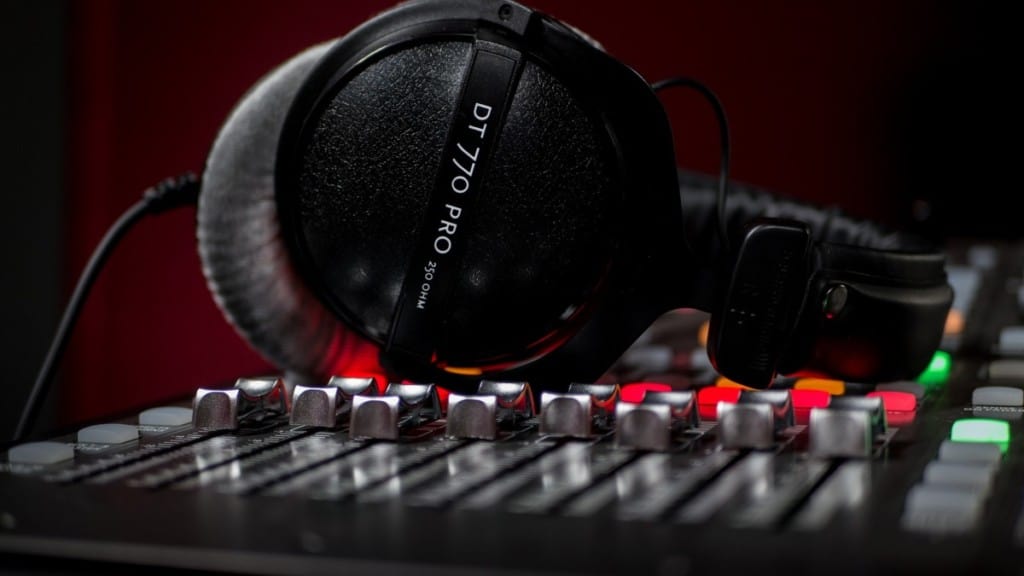 What is headphone impedance?

Headphone impedance is essentially how much power is needed to allow the headphones to perform at their best. Low-impedance headphones require less power, whereas higher-impedance ones require powerful headphone amps to work properly.

Are DACs external or internal devices?

DACs are available both as internal and external devices. Any device that plays audio will already have a DAC installed internally. However, some listeners choose to bypass the internal DAC and replace it with a more capable external model to improve the audio quality.

What is the purpose of a gain switch on a headphone amp?

Gain switches are featured on many good-quality headphone amps. They are used to instantly match the amp’s power with the headphone impedance. This ensures that both devices work at their optimal power level.

I hope this article clears up some of the common questions about headphone amps vs soundcards!