There’s no denying the various benefits that using an amp with headphones provides. Not only does this combination improve performance and sound quality, but it also allows you to control the gain and volume settings with ease.

So, can amplifiers damage headphones?

As a general rule, headphone damage is most likely to happen when you connect the headphones to an amplifier that is too powerful and turn up the volume to a high level. The amp will send more power to the headphones than they are capable of handling, thus overloading the headphones and damaging them.

Providing you select an amp that is power-compatible with your headphones, you’ll greatly minimize the risk of damage.

In this guide, I’ll explain exactly how amps can damage headphones, and how to avoid this. 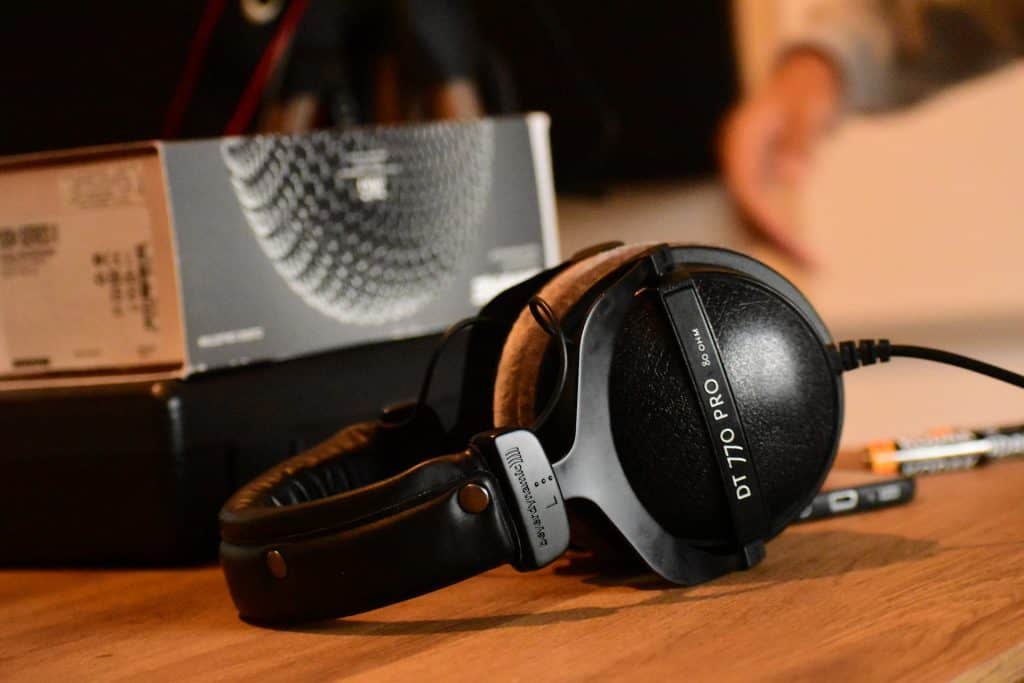 How Amps Can Damage Headphones

By far the most common way that an amp can damage headphones is when there is a power imbalance between the two devices. If you use headphones with an overpowered amp, you run the risk of harming the headphones’ inner electronics and components, perhaps irreparably.

The headphone market is highly saturated, and there are thousands of similar items available. One of the easiest ways to differentiate between headphones is by checking their impedance.

Impedance indicates the resistance of the headphones to the electrical current which is sent through them. This is measure in ohms, commonly symbolized as Ω, which is omega in the Greek alphabet.

When considering how an amp could potentially damage headphones, impedance is of paramount importance. This attribute essentially controls the amount of power that the headphones need to successfully play audio.

Generally, smaller devices like earbuds have a low impedance rating. These earphones commonly have an impedance in the area of 10 ohms – 50 ohms.

These devices and those similar in size don’t require a great deal of power to reproduce audio.

This is why they don’t require an accompanying headphone amp to drive them, and the inbuilt amp within a phone, MP3 player, laptop, or other sound source is more than capable of supplying the necessary power.

Indeed, some larger headphones are still low impedance, but usually bulkier devices are high impedance. These require more power to work to the best of their abilities.

Headphones with higher impedance need to be paired with a high-power amplifier. If the amp is incapable of providing the necessary amount of power, the audio is likely to be compromised, and in some cases, it will be barely audible.

So the power required from the amp directly correlates to the impedance of the headphones. That’s why it’s necessary to check the impedance of your headphones before you decide on the right amp, to minimize the risk of damage or poor performance.

I have written an article entitled “Are expensive headphones worth it” You can read it here.

Like headphones, there are a plethora of amps available with varying specifications.

Amps are designed to provide an adequate amount of power to the headphones, with some amps offering high power and some better suited to being paired with earbuds or other low impedance devices.

A common mistake that people make, which can potentially lead to damage, is choosing an amp that is either too powerful for the headphone or underpowered for its requirements. An overpowered amp can quite easily cause damage to the headphones.

This is because when the volume is turned up on the amp, more power is transmitted to the headphones. Oversupplying the headphones with power may cause them to exceed the maximum power limit of the input, and therefore the headphones will go into overload and be potentially damaged.

This is not common knowledge, and many people are under the false impression that cranking up the volume simply increases the loudness, but in reality, it is providing more electrical power to the headphones which they may be incapable of handling.

This value is 600mW greater than the maximum input power that the headphone facilitate.

If you do this, you’ll eliminate the risk of them being broken by the amp.

Another error that will lead to your headphones being damaged is plugging them into the output on a power amp. This is even riskier than the aforementioned more common mistake of pairing the headphones with an overpowered amp.

This mistake is made commonly by those who perhaps don’t have much experience with audio-related processes. They perceive that the output of a power amp sounds superior to that of a standard headphone amp, which is true for some applications but not for listening through headphones!

The reason that plugging your headphones into the output of a power amp is a bad idea, is because headphones require much less power than other audio devices, like studio monitors, subwoofers, and other speakers.

Headphone drivers are significantly smaller than speaker drivers. This is mainly because they are positioned so closely to the listener’s ear, and therefore don’t have as higher SPL value as speakers and monitors, which need to project the audio over long distances.

Conversely, the power output of monitors and speakers is usually measured in W (watts). This difference in measurement illustrates the large gap between the power requirements of the two devices.

Due to the increased driver size of a loudspeaker or monitor, they naturally have larger power ratings than headphones. This is why there is a distinction between amps designed to work with headphones, and those used for home audio systems.

The amp will deliver too much power for the headphones to handle, frying the inner components and rendering them completely useless in the process.

Avoiding this issue once again comes down to foresight.

If you ensure that the power ratings of the headphones are in line with those of the amp you use, you should have no problems. Complacency is what causes many problems with headphones and speakers, so it’s always best to double-check before connecting the devices to an amp.

How To Check Amp & Headphone Compatibility

Now that you’ve learned about the two most common ways that headphones can be damaged by an amp, I’ll provide you with some easy steps you can take to ensure that neither of the mistakes occurs.

The first thing you’ll need to establish is the impedance rating of the headphones.

This is listed on the specifications or user manual. As I mentioned earlier in this post, impedance is measure in Ohms and indicates the amount of power required to play specific volumes through the headphones.

The table below demonstrates an example of the power requirements of headphones to reach a certain volume level:

Once you know the impedance rating, there is another useful attribute you should look for. This is commonly known as the sensitivity rating, although it’s sometimes listed as “efficiency rating”. Again, this should be listed on the spec sheet or manual of the headphones.

After gathering these two values, you can use a simple calculation to determine the amount of power required to drive the headphones at a particular volume. There are many online calculators you can use, including this one.

Then, you can search for a suitable headphone amp that provides the optimal amount of power that the devices need.

There are many great headphone amps out there, and you can choose between low-power versions or those better suited for high-power headphones.

It’s not the loud sounds that are likely to cause damage to a set of headphones, but rather the extra surge in power that results from high volumes. Listening to excessively high volumes can also damage your ears.

Headphones that are sensitive and have a low impedance of between 8-32 ohms don’t require a dedicated headphone amp. They will work fine with the onboard amp on a phone or laptop.

Tube headphone amps color the sound of the audio differently from their solid-state counterparts. They are known for increasing the overall warmth of the audio, which is a desirable quality for many audio-enthusiasts.