Phantom power is required for recording with any condenser microphone. Most audio interfaces and mixers have phantom power built-in for this purpose. However, dynamic microphones and other equipment don’t need it to function.

In some cases, phantom power can damage equipment. Although dynamic microphones are unlikely to be damaged, sending phantom power to a ribbon microphone can cause permanent damage. It is also advised to turn phantom power off before connecting other equipment like line-in instruments and monitors.

When recording, many different forms of studio-equipment are used.

Various microphones, outboard equipment, speakers, instruments, and cables all form a studio setup. Each of these devices has inner components and circuitry that widely differ from one another.

Phantom power may be safe to use with condenser mics and some dynamic mics, but many of the other devices can be damaged by its presence. In the following article, we’ll examine the equipment’s relationship with phantom power so that you can avoid any disasters. 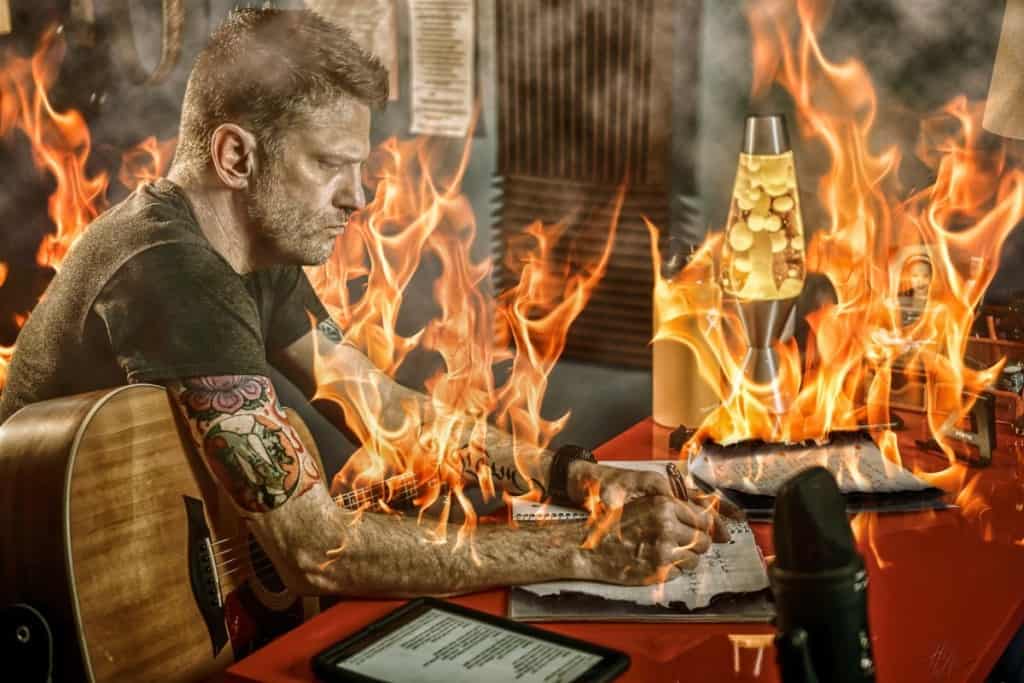 The three main types of microphones used are condensers, dynamic, and ribbon mics. The reason that recording engineers use a mixture of these three is that each microphone has different capabilities that are unique to its design and inner construction.

To understand whether phantom power can damage these three popular pieces of recording equipment, we need to establish what each one is used for. Condenser microphones are the only form of equipment that requires phantom power to function. Without it, the microphone simply won’t turn on, and it will be rendered useless when it comes to capturing audio.

There are some exceptions to this rule, but, rarely, a condenser mic will not need phantom power.

The reason that condenser microphones generally do need phantom power is that they have internal active electronics that require an external source of power. This results in them producing a very high impedance output, meaning they need a powered circuit to bring the impedance down to a manageable level.

Condensers are used for many different purposes, such as vocals, acoustic instruments, amplified instruments, drum overheads, and spoken word. They fall into the category of equipment that phantom power cannot damage, so you don’t need to worry about them.

I have written an article that explains what phantom power is. You can read it here.

That brings us to dynamic microphones.

The question of whether phantom power can damage these popular items of recording equipment is less straightforwardly answered than their condenser counterparts. In most cases, if you accidentally leave phantom power on while using a dynamic microphone, it won’t cause it any harm. In live sound situations, the phantom power being present will likely be unnoticeable.

The only likely situation where phantom power can damage a dynamic mic is when there is a problem with the XLR cable used to connect it to an interface or other piece of recording equipment.

When power flows through an XLR cable, the pins evenly distribute the power. If, for some reason, the pins are damaged and malfunction, this could result in the amount of power flowing through each pin becoming imbalanced.

If this problem occurs, then the imbalanced power can cause damage to a dynamic microphone, and even destroy it completely in some cases. That brings us onto the third type of microphone, and arguably the piece of equipment that phantom power is likely to damage the most.

Check out this video that offers advice on damaging your microphones with phantom power.

This vintage-style recording equipment comes in two forms: those that require phantom power, and those that will be damaged by it. The latter is the most common type of ribbon microphone, so if you are using one you should always refer to the individual specs to protect it from harm.

Leaving phantom power on when using a ribbon mic can result in the internal ribbons being stretched, or in some cases, completely blown. The presence of the additional power is too much for the ribbons to cope with, and the result is often permanent damage that cannot be repaired, or significantly impacts the ability of the mic.

Again, the main factor that allows phantom power to damage this popular form of recording equipment are issues with cables. A common mistake made by engineers and musicians is cross-patching microphone tie lines. Many studios route their signals using a convenient method called patch bays.

Patch bays often consist of two rows. The top row is where the lines that run to microphones are positioned. These cables are likely to run to vocal booths or isolation booths for recording instruments. The microphone is connected to the recording equipment here.

On the bottom row of a patch bay, the inputs from the mic preamps and outboard gear are usually positioned.

This technique allows an engineer to crosspatch microphone lines and sends phantom power to only the bottom row. Where the problem occurs, is when phantom power is accidentally sent to the upper row, and all of the microphones are subjected to it. This is disastrous for ribbon mics, as their ribbons are directly exposed to the phantom power through a transformer, causing irreparable damage.

In the table below, you can see which microphones require phantom power and which is likely to cause damage.

Another form of equipment that can be damaged by phantom power is line-in instruments. Sometimes called line-level gear, this category includes any keyboards, guitar, or other electrical instruments that don’t require external power to be recorded.

If line-level devices are used with phantom power turned on, this can result in the output electronics being fried.

This is why most audio interfaces and mixers are equipped with specific line-level inputs, which is where instruments should be connected. Plugging a line-in device into an XLR mic input is not advised, especially when phantom power is being sent to that input.

Some may send the phantom power to all of the inputs in a single block, while other, more sophisticated devices offer phantom power for each input.

Again, checking the specs of the equipment you are using is the only way to definitively know the ins and outs of their phantom power operation.

Likewise, some instruments and line-level devices will be fitted with protective measures to avoid phantom power from causing them damage. Most of this equipment will survive for a short period while phantom power is connected, but after around a minute, the damage is likely to occur.

The longer you leave a preamp or line-level device plugged into an interface that is producing phantom power, the greater the risk of damage.

That’s why turning off phantom power in between recordings, and when connecting different equipment, is the best way to avoid any issues from occurring.

In some cases, phantom power can also cause damage to unbalanced output devices. If you have ever turned on phantom power while your studio monitors are active, you’ve probably noticed the sharp pop that is sent through the speakers.

Although this “popping” sound is unlikely to damage the monitors noticeably, it certainly doesn’t do them any good.

It is the sound of the power surge being sent through the interface, into the output where the monitors are connected. It’s advisable to ensure that the monitors are either turned off before you activate phantom power, or at least to turn down their volume control so that the pop sound doesn’t come through the speakers.

You can read more on this subject here.

No, the legendary Shure SM57 is a dynamic microphone; therefore it doesn’t require phantom power. Only condenser mics generally need phantom power. Due to the robust nature of the SM57, it is unlikely to harm the microphone though.

Why shouldn’t you use jack cables for connecting monitors?

TRS jack cables are not balanced, so using them to connect monitors to an audio interface will create interference and unwanted noises. It won’t cause damage, but will seriously impact the clarity of the sound they produce.

It’s very unlikely that phantom power will damage a pair of headphones. Most interfaces have separate headphone outputs which are independent of the channels where the phantom power is present.

I hope this clears up any questions you have about phantom power damaging your equipment.