Soundcards are responsible for processing audio within a computer or laptop. The soundcard that is installed within a device has a significant impact on its audio quality. Microphones are equally as important for recording audio.

Will a soundcard affect microphone quality?

As audio technology has improved and recording equipment has become more accessible, most microphones now bypass the sound card.

When Does A Soundcard Affect Microphone Recording Quality?

The only instance when a soundcard will affect the quality of a microphone is when an analog mic is connected directly to the input on the soundcard. This method has largely been replaced by combining a microphone with an audio interface, which effectively bypasses the soundcard.

However, if you are connecting the mic directly to a soundcard, then the quality will be impacted by the capabilities of the device.

The aspect which affects the microphone most significantly is the performance of the A/D converter, which impacts how efficiently the soundcard can convert analog audio signals into digital data so that it can be processed by the computer.

A/D converters vary in their abilities and effectiveness.

A sub-par A/D converter will cause the microphone quality to be compromised, due to the soundcard’s reduced conversion speed. This can cause issues such as lag, lack of recording quality, and in some cases, unwanted noises being present in the final recording.

Generally, more expensive soundcards that are specifically designed for audio recording will contain outstanding A/D converters. These devices ensure that the microphone works to the best of its ability, and the audio it captures is free of any blemishes.

If you are intending to record an analog microphone straight into your soundcard, then investing in a more capable option is the best way to ensure that the quality doesn’t suffer.

Check out this soundcard on Amazon.

USB microphones are popular choices for mobile recording studios, due to their convenience and quick set-up.

Rather than be affected by the soundcard, these mics commonly have their A/D converters built into their inner circuitry. This allows them to bypass the soundcard in the computer, and instead rely on the specifically designed one that they house.

The Audio Technica AT2020 USB microphone is a popular choice and has great reviews.

Although soundcards don’t affect USB microphones, they are still considered to be inferior to using the most popular method. This method entails connecting a microphone to the direct input of an audio interface via XLR.

Similar to USB mics, those with XLR connectors are also not affected by the soundcard. The interface also includes an A/D converter and is designed to specifically interact with recording microphones.

Whether you are using a USB microphone or an XLR microphone going into the input of an audio interface, you don’t need to worry about the soundcard affecting the quality of the recording.

If you choose to plug an analog mic straight into the soundcard, it’s worth upgrading to ensure that the A/D converter doesn’t negatively impact your recordings.

The single most effective way to ensure that a soundcard is not affecting your microphone’s ability to record is by using an audio interface. These highly useful devices have replaced the sound card’s role in the recording process, providing more reliable performance and many more processing options.

Depending on the type of computer or laptop you are using, you may require an audio interface with a different type of connector.

USB interfaces are commonly used with PC, while Mac offers the possibility for a fire-wire connection also. Unlike soundcards, these devices are optimized especially for recording audio and interacting with microphones.

When you first connect an audio interface to your device, you may need to install certain drivers before it’s usable. Once you’ve done this, you’ll find that when you view the audio properties of the device, the inbuilt soundcard has been replaced by the audio interface.

This indicates that the soundcard has now been bypassed, and consequently it will have no effect on microphone quality. The recording quality is now solely down to the audio interface and the particular microphone that you are using.

Affordable audio interfaces often come with 2 separate channels. This allows you to plug two microphones or instruments into the inputs, and record simultaneously if you wish. Soundcards don’t offer this quality, and only allow you to record using a single microphone at once.

Another, more indirect way that soundcards can potentially affect microphone quality is when you are listening to the audio after recording. Soundcards affect the monitors or headphones that you use, and if they are not up to a certain standard, the recorded audio may sound of lesser quality.

Here’s a great video that discusses both microphone and audio interface quality.

Audio Interfaces Provide A Reliable Solution To This Problem.

You can send outputs via balanced XLR cables into your monitors, or plug headphones directly into the interface. This puts less stress on the soundcard of the computer and results in a more streamlined listening experience.

Technically speaking, soundcards are audio interfaces. I have written an article on this subject. You can read it here.

They perform the same function, but with fewer capabilities. Sound cards offer limited sound quality and inferior I/O, making them more likely to affect the performance of a microphone. The table below shows the difference between an inbuilt soundcard and an audio interface.

One of the main ways that using a soundcard for recording negatively affects microphone quality is input and output configuration.

Audio interfaces offer numerous inputs and outputs and cater to different types of connections. Inbuilt soundcards, on the other hand, are limited in this respect.

Determining how many inputs and outputs you require for your recording needs is highly important. The more primitive audio interfaces offer 2-channels, with more advanced options stretching to hundreds of channels that can be recorded simultaneously.

Singer-songwriters who perform using vocals and guitar are likely to only require 2 inputs.

Unlike soundcards, interfaces often offer phantom power, which is essential for recording using a condenser microphone. Another option offered by interfaces is instrument-level inputs. These allow you to directly plug your instrument into the interface, another option not included with soundcards.

If you are recording drums, you will require many inputs for all of the separate microphones. Soundcards are not able to cope with this many microphones recording at once and therefore would cause the quality to be significantly compromised.

Check out the Apollo X8 (pictured below) for a super high-quality audio interface with 8 recording channels.

Take a look at the incredible Apollo X8 here on Amazon. 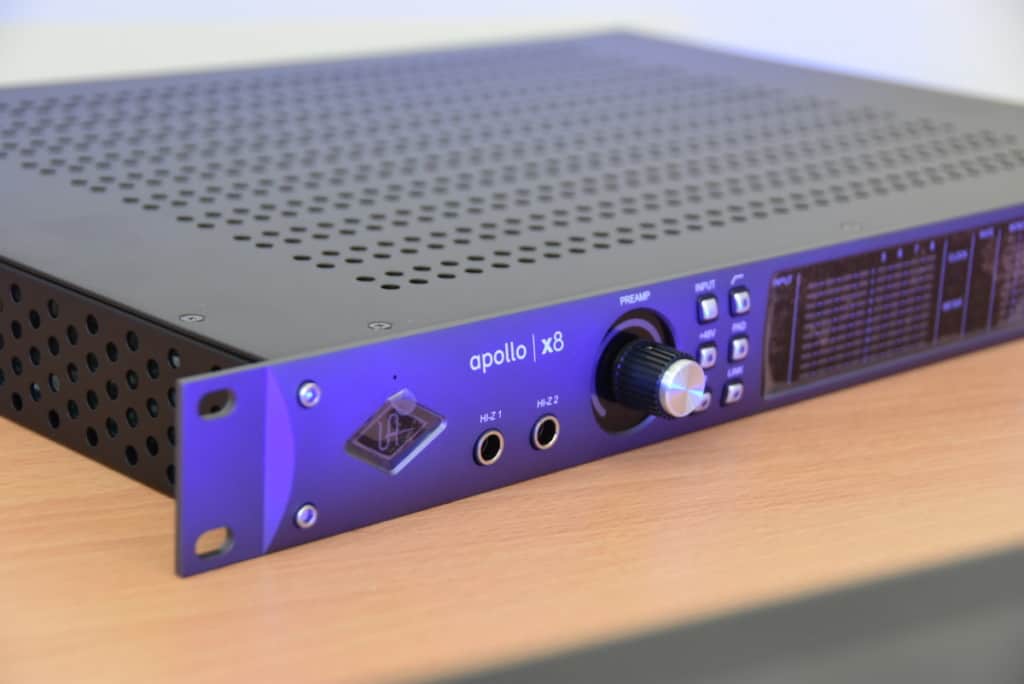 Alternatively, interfaces are built for this very purpose. Their inner components are designed to cope with multi-mic recording and ensure that the quality remains high. This allows you to mic every drum separately and then process them in your DAW on individual channels.

Interfaces also allow you to connect microphone preamps, and improve the quality of the recordings.

Plugging directly into a soundcard doesn’t offer this possibility. Preamps are a great way to refine the audio before it enters the interface, and save lots of time during the mixing process.

Preamps also provide you with an abundance of extra channels for multi-mic setups. You can adjust the gain settings of each microphone, check the levels before recording, and in some cases tailor the EQ settings to suit the sound you are aiming for.

A soundcard simply can’t affect microphone quality in this way. This is why most home-studio setups require an audio interface to do the job of the soundcard. They perform more efficiently, offer more inputs and outputs, and creates a much superior quality of the recording.

The key to choosing the right audio interface to replace your soundcard is considering exactly what instruments and sound sources you intend to record.

You need to ensure that the interface offers adequate amounts of inputs and outputs and that its connectivity options are compatible with your laptop or computer.

What is the difference between an audio interface and a mixer?

Audio interfaces are designed specifically to record audio signals into your computers on multiple tracks.

A mixer, on the other hand, is designed to process multiple sound sources before they are recorded. Interfaces are more common for recording, while mixers are predominantly for live sound.

Check out my article on this subject here.

Is firewire better than USB for recording?

Firewire connections generally support a higher bandwidth than their USB 2.0 counterparts. This allows it to stream data in both directions simultaneously, while USB can only receive data once the outstanding data has been transmitted. In this respect, firewire is more reliable for recording.

Can you replace a laptop’s soundcard?

To replace the soundcard in a laptop, you have two options. Firstly, you can fit the replacement into a vacant PCI or PCI-E expansion slot. If this is not offered by the particular laptop, you can use an external audio adapter which is plugged into the USB slot.

Choosing the correct soundcard or audio interface is important to microphone quality. I hope this article helps you make an informed choice on which direction to go when recording. Thanks for stopping by!