Audio interfaces and mixers are two integral devices for recording music. Whether an audio interface can be used as a mixer is a question that concerns many recording engineers and musicians.

Can an audio interface be used as a mixer?

Standalone audio interfaces cannot be used as mixers. They simply don’t provide the necessary controls and parameters that a mixer offers. However, there are combination units that perform the function of both audio interfaces and mixers.

Mixers with inbuilt audio interfaces combine the qualities of the two devices, allowing for audio to be recorded and mixed before it reaches the DAW.

The particular type of audio interface that is used will determine whether or not it can be used successfully as a mixer. After reading this comprehensive guide, you’ll learn the ins and outs of whether this is possible, and why.

The Differences Between Audio Interfaces And Mixers

Audio interfaces and mixers are often categorized together, but in reality, there are several key differences between the two recording devices. To understand whether an interface can double up as a mixer, it’s important that we first establish the contrasting aspects of the two.

Standalone audio interfaces are not designed to be used as mixers. They offer a set of functions that is exclusive to each device. The main role that an audio interface plays in the recording process is simply to transport the recorded signal into software, where it can be subsequently mixed.

With these standalone interfaces, the DAW software is used to perform the role of the mixer. Although the interface will likely offer some gain controls, volume level, and monitor level controls, it won’t house the multitude of processing options provided by a mixer.

Mixers are essentially condensed versions of the analog mixing desks found in professional recording studios. Here is a good example from Yamaha.

They have multiple inputs and outputs, each with individual controls where levels can be adjusted, EQ can be edited and other effects like reverb, delay, compression, or modulation can be applied before the audio reaches the recording software.

Check out this Yamaha 10 input stereo mixer here on Amazon

Why Would Anyone Choose An Audio Interface Over A Mixer?

Well, audio interfaces are vital components for digital recording. When a microphone is plugged into the input or an instrument is directly inputted, the interface can record the signal straight into the software.

Compared to vintage recording techniques like using tape or large analog mixing desks, audio interfaces are much quicker, less expensive, and more transportable. A standalone mixer will not be capable of recording the audio signal into the software without using an interface with it too.

Here’s a general breakdown of the standout qualities of both devices:

Thankfully, there are plenty of options that perform the functions of both an audio interface and a mixer. These are known as combination units or mixers with a built-in audio interface.

Check out this Behringer Xenyx 16 Input Mixer with a USB audio interface here on Amazon.

The main benefit of these hybrid devices is that they can be used to record audio with high clarity, but also provide you with the hands-on control of a hardware mixer. If, for example, you were recording a live band with multiple sound sources, an audio interface with a mixer built-in would make the process much easier.

If you needed to adjust the levels of a certain channel in a headphone mix for one of the performers, you could do this instantaneously using the parameter on an audio interface/mixer combination unit.

Likewise, if you wanted to add a touch of reverb to a vocal recording so that the singer can hear some warm resonance in their playback mix, this would be easily achievable using one of these special interface/mixers.

In contrast to using a standalone audio interface, where you would have to go into the DAW software on your computer, set the levels for each mix, load up VST plugins to add effects, and constantly refer back to the digital mixing screen to check that the audio isn’t clipping, a combination unit allows you to do it all in real-time in a much more practical way.

This means that the audio from the mixer is directly sent to the DAW through the interface, as one block of audio rather than multiple separate channels. This highly limits the capability of the interface/mixer combination unit.

As we’ve already established, certain things aren’t possible on a standalone audio interface that can be done on a mixer. This video explains these aspects in detail.

Some of the functions do indeed cross over, but with varying effectiveness. To understand whether a particular audio interface can be used as a mixer, we need to examine some important features.

A great audio interface to get started with is the Focusrite Scarlett Solo. (pictured below) Check it out here on Amazon

I have written an article that shows how to get started with an Audio Interface. You can read it here.

Some of the main things to look out for on an audio interface/mixer are:

The first thing to look for when deciding whether a certain audio interface can be used as a mixer is the type of inputs it facilitates. Generally speaking, both devices will have a mixture of XLR inputs for condenser and dynamic microphones, and jack inputs.

This sounds fairly straightforward, but it can get complicated. Some interfaces offer line-level inputs/outputs that cater to different types of jack cables. These include TRS balanced, TS unbalanced, and RCA unbalanced. It’s important to check the compatibility of the outputs with your monitors.

Audio interfaces that can successfully be used as mixers will offer more inputs/outputs. These will likely all have individual controls that can be used to tweak the characteristics of the channel.

To be able to use condenser microphones with an audio interface or mixer, it requires +48v phantom power. It’s important to ensure that the device in question does provide this, otherwise you won’t be able to use certain mics for recording.

Some limited interfaces only offer phantom power on one or two channels. Mixers, or combination units, often provide separate phantom power to every channel, so these are a much better choice if you intend to use multiple condensers.

If you are unsure what phantom power is, or if your microphone needs it then check out my article here. 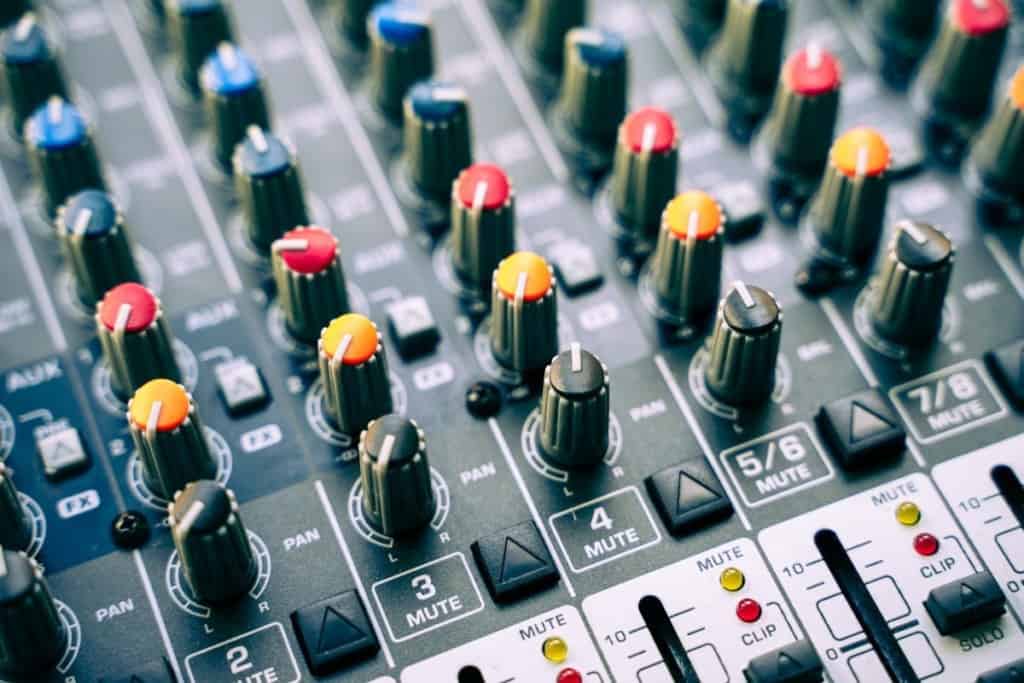 Loopback, or re-routing audio, is a common technique used by live streamers. Audio interfaces and mixers sometimes offer this as a simple function, but with others, you may have to do some research on cable placement to achieve it.

Loopback is essentially routing the audio from your computer or laptop back into the mixer/interface so that it can be blended with the audio from microphones or instruments.

Another thing to consider when deciding whether an audio interface can successfully be used as a mixer is the choice of stereo and mono channels. Mixers usually offer a large number of channels, but this can be deceiving.

A certain number of the channels is usually dedicated to mono recordings, with more in stereo. This means that the number of microphone inputs is limited, due to only a few of the mono inputs offering XLR connection.

The final thing to look out for when looking for an audio interface with mixing capabilities is the compatibility with software. The main difference between a standalone mixer and one that also includes an audio interface is that the former isn’t capable of recording straight into computer software, but the latter is.

Most interfaces/mixers that are capable of being hooked up to recording software will require you to download certain drivers onto your computer, to install the device.

You can then simply find the device within your DAW, choose which inputs to assign to which channels, and use it to record audio straight into the software. 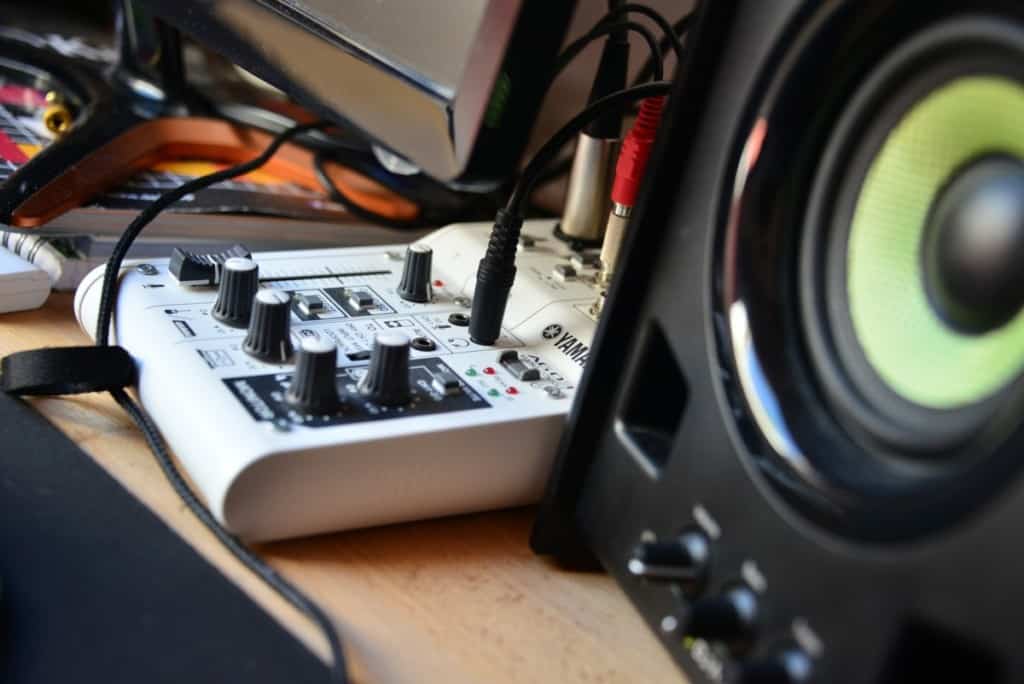 Can you add reverb with an audio interface?

In the majority of cases, this is not possible. Audio interfaces only include gain and level controls, not processing effects. To add reverb, you would need to record the audio, and use plugins or effects from your DAW.

Should you use a preamp with a mixer?

Many mixers have built-in preamps. The only time it would be beneficial to use an external preamp, would be to alter the tone or sound of an instrument before it reaches the mixer.

Are audio interfaces or mixers better for live performance?

Mixers are better for live performances. They offer many more channels, and each channel can be edited much more extensively. Audio interfaces are good for recording live audio, but not for live sound purposes, however, if you wish to learn more about this check out my article here