Recording drums is an art-form that can make or break a track. With many methods, techniques, and ideas floating around, it can be difficult to know the most effective way to record and mix a drum kit.

Do you record drums in mono or stereo?

You can record drums in both mono and stereo. Each drum should be recorded as a separate instrument. Individual microphones are used to record the kick drum, snare, and toms; therefore these are captured in mono. However, overhead and room mics are recorded in stereo.

Recording drums in mono or stereo significantly impacts the sound and your options when it comes to mixing the tracks.

Therefore, it’s important to identify your desired results before recording. There isn’t a singular method that can be used for recording drums, and it comes down to personal preference. In the following sections, I’ll cover all of the information you need to know regarding mono and stereo drum recording.

Whether you should use mono or stereo techniques for recording drums depends on several variables.

The first factor to consider is how many microphones you have available. If you have enough suitable mics to individually capture the kick, snare, and toms, then these should be recorded in stereo.

The main advantage of placing individual mics in from of these drums is that it allows you to mix them separately after recording. Due to the different characteristics and frequency ranges of kicks, snares, and toms, they require varying levels of EQ, compression, and gates to make them sound clean and refined.

Of course, there is always going to be some spill that occurs due to the compact positioning of a drum kit. To counter this, there are specifically-suited microphones that are designed for each drum. This makes mono recording possible and provides you with much greater freedom during the mixing and mastering process.

Each microphone is angled directly towards the drum it is intended to capture, essentially breaking the kit into segments that can then be processed one at a time. Essentially, you’re treating each drum as you would a guitar or vocal recording, isolating them as if they are separate instruments so that you can work with their unique attributes.

However, it’s important to bear in mind that although you are treating each drum like an individual instrument, the end goal is to blend them into one aspect of a song.

When we listen to drums, we don’t generally split them separately, but rather hear the whole kit as a block of percussion. In the table below, you can see the frequency ranges of each drum, and whether they are best suited to mono or stereo recordings.

As you can see, this method involves combining both mono and stereo drum recordings.

Why Do Overheads And Room Mics Need To Be Recorded In Stereo, While Other Drums Are In Mono?

This is because overheads and room mics are used to capture multiple drums, rather than one singular drum. Unlike a snare drum mic, for example, that is angled directly at the drum skin and positioned in close proximity, room, and overhead mics are placed a distance away from the drum kit.

Overheads microphones are used to record cymbals, first and foremost, but they also pick up the rest of the kit.

This spill is intentional, and often two identical overhead microphones are used, placed at the same angle, height and distance symmetrically. This ensures that all of the cymbals are captured with equal velocity, and creates a stereo effect.

Room mics are slightly different in terms of their purpose. They are used to record the overall ambiance of the whole recording room and are placed in a “sweet spot” that is determined based on the acoustics of the environment.

Rather than focusing mostly on cymbals, room mics aim to capture the whole drum kit and the reflections of sound waves off the surfaces of the room.

For this reason, room mics should be recorded in stereo. Mixing these tracks requires you to consider the whole kit, rather than focusing on the frequency range of one drum, as you would when recording in mono.

It’s impossible to consider the question of whether you record drums in mono or stereo, without discussing the Glyn Johns method. Used to record drum tracks of the ’60s most iconic rock n’ roll acts, this mono technique is one of the most simple and effective ways to record drums.

All that is required to record drums using this method are two overhead condenser microphones, a kick mic, and a snare mic. The kick mic can be either condenser or dynamic, while the snare should be dynamic.

Indeed, this seems quite primitive and basic. However, it was the technique used to record John Bonham of Led Zeppelin, Charlie Watts of the Rolling Stones, and Keith Moon of The Who. Endorsements don’t get much better than that!

Let’s take a moment to listen to Keith Moon’s recording. This is an isolated track with drums only!

To achieve this, you start by placing the first overhead mic roughly 3-4ft above the snare drum, in the center of the kit. The microphone should be angled downwards directly over the kit. This mic captures a blend of the snare, cymbals, and toms simultaneously.

Then, the second overhead mic was placed in an unconventional position, slightly to the right-hand side of the floor tom, around half a foot above the drum’s outer rim. It is angled to the left, in the space between the snare and hi-hat. The role of this microphone is to record the drum kit from an altered perspective, in mono.

For the two overhead mics to successfully record the drums in mono, they need to be positioned at the same distance as one another from the center of the snare drum. This is pivotal for mono drum recording. If the distance isn’t the same, phase cancellation could occur and ruin the recording.

The final steps in this method quite simple. The kick drum mic needs to be placed either outside the drum head or inside the drum itself, depending on your personal preference. Likewise, the snare mic can be set up either at the top or bottom of the drum, depending on what sound you are aiming for.

The Glyn Johns method was used to record some of the greatest drummers of all time, completely in mono. As technology advanced, record labels began to request that the drums were made stereo, so many of the tracks had to be re-mixed. To hear the true representation of 60s rock drums, you have to listen to the original mono mixes.

One of the reasons that stereo drum recordings became so popular, is that they allow for panning.

This is essentially the practice of spreading individual instruments and tracks across the stereo field. If a track is panned hard left, then it will only come through the left speaker and vice versa. If the track is panned centrally, it will come through both speakers equally.

Recording drums in stereo allows you to pan the kit as if it is being played on a stage. Commonly, engineers will position each drum as they are set out on a drum kit, with the snare slightly to the left, kick drum central, ride cymbal to the right, and so on.

If you record drums in mono, you cannot achieve this panning effect. That’s why it’s recommended that you merge mono recording with stereo so that you can add some width and panning to your recordings.

Ultimately, it depends on the style you’re aiming for, and the equipment you have. There’s no right or wrong way to record any instrument, but there are certain methods that will produce the results you’re looking for, and some that simply will not. 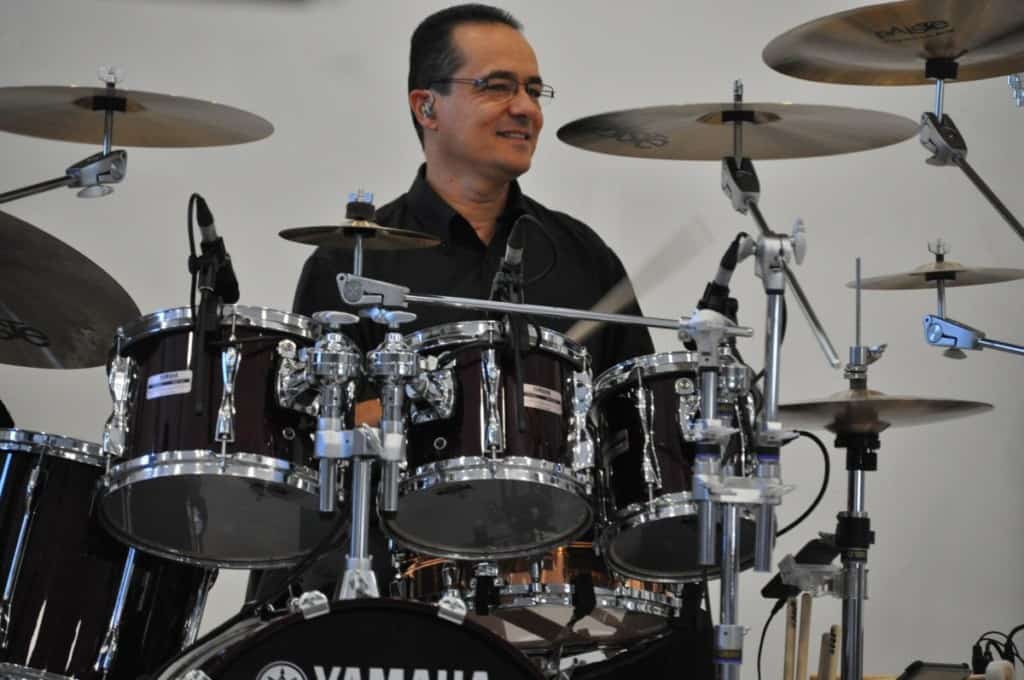 Should you use a metronome when recording drums?

Metronomes are very useful for drum recordings because they help to keep the drummer in time. They also allow for easier mixing afterward, because the drum recording can be set to the grid in a DAW and visually analyzed. However, some drummers feel that metronomes are detrimental to their playing style.

Can you use a condenser microphone on a snare drum?

Condensers are great for overheads, but not for snare drums. Due to the harsh transients and fast attack of a snare, it’s better to use a dynamic mic that is less sensitive.

How do you stop a snare drum from ringing?

Tuning a snare drum is the best way to prevent it from ringing. If this isn’t an option, a good trick is to attach a wallet to the drum’s upper skin. This helps to tighten the sound, producing a crisp hit.

Remember there are no rights and wrongs when recording but hopefully, the methods here will help you choose the right path.