You have a computer and want to start making music with it. You’ve read everywhere that you need a soundcard or an audio interface and you start wondering whether they are the same thing or not.

In fact, you’ve heard these terms so many times that you are so confused.

Well, don’t worry about it, you’re in the right place. I’ve had more than one of both in my career as a producer, musician, and engineer, and I’m here to help you out.

So, Is a sound card an audio interface?

That was the short answer, there is a lot more to tell you about this, so buckle up and let’s go!

What Is A Sound Card?

A sound card, as its name implies, is shaped like a card and installed inside your computer. What it does is simply replace the integrated sound card that comes on your motherboard to process audio better.

Sound cards are internal devices that go well with PC-style computers because you can exchange them by just removing the side panels of your PC tower.

Most sound cards actually have their connection spots on the back which are not handy for a home studio or a studio in general.

The ability to process sound is focused on other tasks that are not converting analog to digital and back to analog as accurately as possible. The way that sound cards are made and the companies behind them have different audiences for audio interfaces.

It is not unusual to see a super-charged gaming computer with a massive sound card that even has a fan of its own. This is because most sound cards have their own buying audience which is audiophiles and gamers.

What Is An Audio Interface?

An audio interface is, basically, an external sound card focused on converting audio from analog to digital the most accurate way possible.

It is also a device with comfortable and accessible inputs and outputs that will help your computer process the incoming and outgoing audio so you can record digitally what you play analog and also hear analog what you reproduce digitally.

Inside most audio interfaces what you have is a sound card in a box with specific components dedicated to audio recording.

This being said, if you add an audio interface to your computer and hook up a pair of speakers to it, what you have is a sound card since it will handle all of your computer’s audio.

Instead of a huge fan for it, what you’ll have are dedicated inputs and outputs for microphones, state of the art preamps and FireWire, USB or Thunderbolt connections.

Take a look at the stampsound video on this subject.

You can subscribe to the channel here. It’s free.

Although you’re going to read everywhere to dismiss sound cards completely for audio production I can tell you to be a little more patient, read on, and then make a decision.

I have written a guide for beginners on getting started with audio interfaces. You can read it here.

Similarities Between Soundcards And Audio Interface

There are plenty of similarities between sound cards and audio interfaces. Let’s see some of them:

· They have an integrated DAC – DAC stands for Digital Audio Converter and since you plug either speakers or headphones to both, they need to have a DAC to feed analog devices such as those with digital audio coming from the computer.

· They can be replaced – Unlike the integrated sound processing power in your motherboard, you can exchange a sound card or an external audio interface in the case you need or want an upgrade.

A great little audio interface to get started with is the Focusrite Scarlett 2i2, it even comes bundled with the incredible Ableton software and has phantom power built-in!.

Check out the Focusrite Scarlett 2i2 here on Amazon. 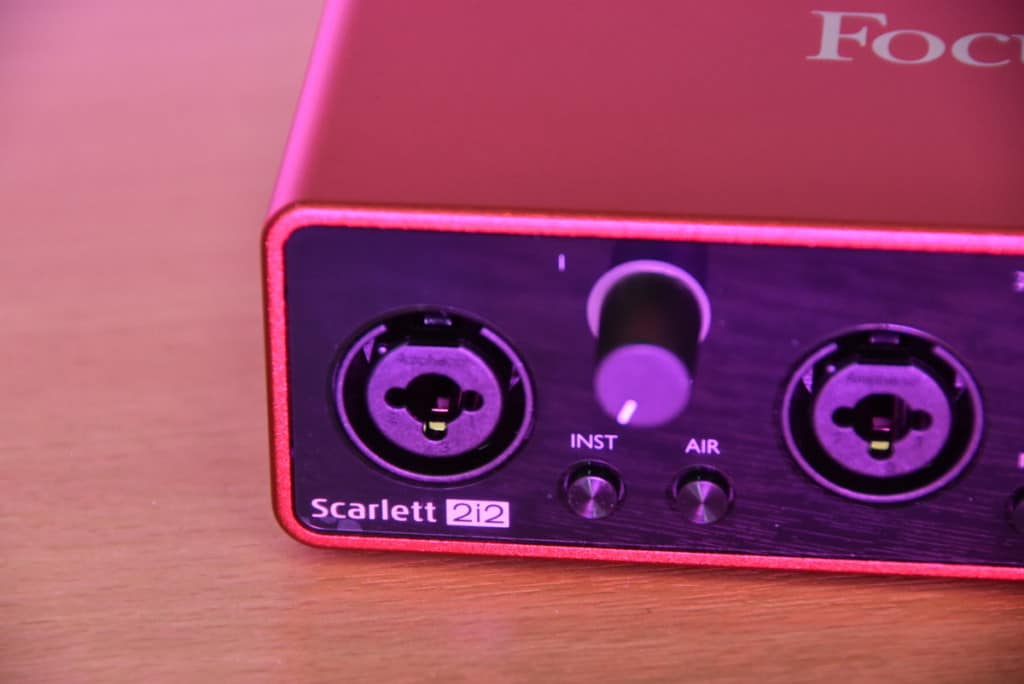 Differences Between Soundcards And Audio Interface

There are plenty more technical differences than the ones I’m about to name here, but you get the idea.

· Flat response – An audio interface is designed and created to feed flat audio to flat monitors. The more true to the original it can get, the best quality we are talking about. On the other hand, sound cards have a distinct sound because they are made for music listeners, movie lovers, and gamers. It is not uncommon to find a distinctive low-frequency boost in the response to make those rumble sounds more real and the bottom end of recordings more powerful. Watching a movie with a flat audio interface and flat-response monitors is way more boring than doing so on a sound card with a 7.1 home theater, believe me.

· Design & placement – While the audio interfaces are external and designed to have as many inputs and outputs as possible to accommodate other studio gear, sound cards are built to be internal and focus on audio processing rather than inputs.

· Latency – Since sound cards are not designed to process a lot of audio going in you can get some latency when hearing the recording in real-time. The existence of PCIe sound cards that are wired straight to the motherboard makes this issue less noticeable but is still something that can happen. On the other hand, sound interfaces from the lowest budget (I dare to say) have zero-latency because it is paramount for recording.

· Phantom power – In case you are not familiar with the term, phantom power is 48 volts of current that condenser microphones need to generate sound at an audible level. Most audio interfaces offer this kind of feature because they are designed to have condensers plugged to them. On the other hand, sound cards do not offer this feature because it is not needed to fulfill their duty.

I have written an article on phantom power. You can read it here.

Can You Use A Sound Card To Record Music To A Computer?

The answer to that question is an absolute yes.

In fact, if you let me start this answer with a story I will tell you that my first steps in the world of computer music were given on my old mum’s computer with Audacity and the stock sound card. We would set up all the instruments in the living room and with the microphone that came with the computer (one of those gooseneck white ones) record everything in one take (Beatles style).

I did that for a long time before I could put together my first audio recording computer which had a multiple-input sound card. It was not until several years later that I was able to buy my first audio interface.

If you have the budget to start on an external audio interface, then that is 100% the correct path to follow.

On the other hand, if you don’t have the budget to buy one, don’t let that stop you from getting started with your dream. Yes, it might be a little annoying having to fight against it from time to time, but it is much worse being idle learning nothing while you save your bucks.

Lack of gear should never be an impediment to get you walking on this beautiful path of music production and recording.

Check out my article on whether audio interfaces make a difference. You can read it here.

Is My DAC An Audio Interface Too?

Finally, I wanted to address this question that I have been getting a lot too.

The answer is a definite yes.

A DAC is a digital to analog converter that is present in many more devices than you thought. To begin with, every time that you plug your headphones into your cellphone there is an internal DAC transforming digital data coming from your music player, phone call, or instant messaging platforming to the speakers of your headphones.

Also, when you speak into the cellphone’s built-in microphone or the one on your headphones, the internal DAC transforms it into digital information for your phone to process it.

This is not so different from what an external audio interface does, just that it is simpler and you might not have noticed it ever before.

For those of you who are audiophiles reading this, you know that you can buy better quality DACs to be able to hear your music in better quality; closer to vinyl or tape or whichever means of analog recording and playing you favor.

Check out this great video on DACs and how to use them as a beginner.

Sound cards and external audio interfaces coexist in the world the same way that flat-response studio monitors and regular speakers with definite equalization do.

They excel at different things and hence you get to choose what you want it for.

Using an external audio interface with state of the art AD/DA converters and eight inputs to play Call of Duty online is just as much of an epic fail as trying to record music with the latest Sound Blaster sound card.

Check out my article on using an audio interface without studio monitors. You can find it here.

You can do it with both, but you’ll be investing money in a rather inadequate way.