Have you wondered why some guitars have a single large soundhole while others guitars have F-shaped holes? Do these different styles of construction serve any sonic purpose, or are they simply embellishments for aesthetic appeal?

Why do some electric guitars have holes in them?

The soundhole on an electric guitar acts as an opening that relieves tension and facilitates better vibrations in the sounding boards of a guitar (top and back). This hole is usually round in acoustic guitars and placed below the strings. In electric guitars, it is two f-shaped holes towards the side.

Certain instruments like electric, steel-string, and nylon string guitars, have an opening in the top or upper board. 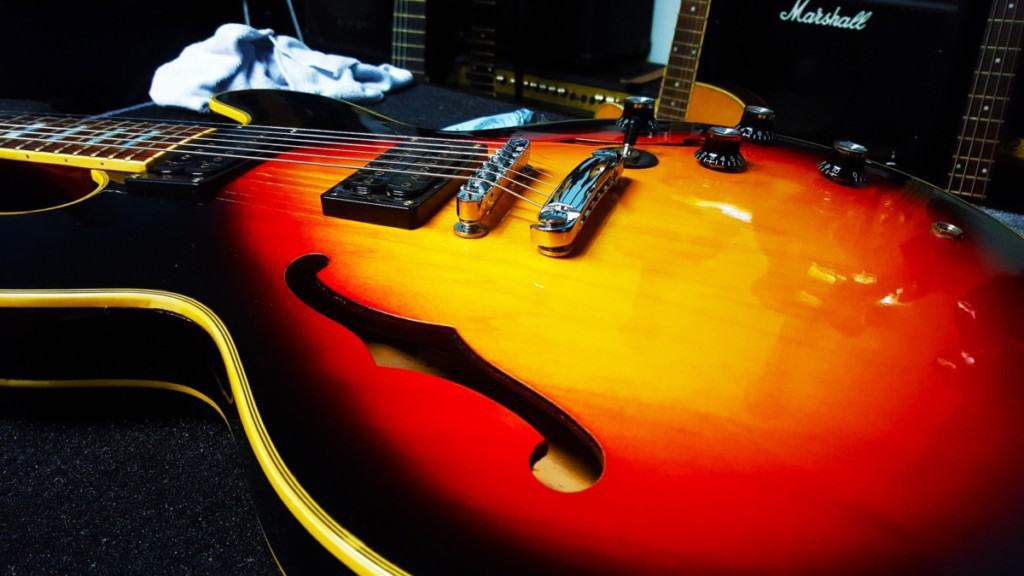 In an acoustic guitar, the sound hole is located where the pickups would be in an electric guitar.

Over the years, luthiers and instrument makers have experimented with the placement and size of these sound holes to make improvements on what is conventionally considered to be ideal. Some of these have succeeded to some extent and others have become obsolete or erudite.

In this post, we will dive deep into the role of the sound hole in acoustic and electric guitars with some well-known examples and interesting facts.

While luthiers and custom guitar builders are willing to experiment with the placement, most big-name brands and guitar manufacturers refuse to jump on board. Even among musicians, there is a selective crew of mavericks who are committed to the cause, and the vast majority of musicians prefer traditional builds.

Most musicians still prefer acoustic and electric guitars with a traditional or conventional design, especially when it comes to the sound hole. Certain brands like Tacoma Guitars, USA, have experimented with the sound hole placement.

Tacoma Guitars launched a Wing Series of acoustic guitars featuring an unusual paisley-shaped sound hole to the left corner on the upper side. The company claims that these sound holes improve the resonance of the guitar because they do not stress the top of the guitar as much as a conventional sound hole would.

Either way, guitars with “corner” holes are more about the direction of the projection of sound, although they result in some uniquely fascinating instruments.

Check out this great video from YouTube that explains about F-holes.

The Purpose Of Sound Holes in Acoustic Guitars

Instead of diving into technical jargon like acoustic conductance and accelerated airflow, let us take a simple example to understand the directional nature of sound waves. To do this, you can play some music on your mobile phone and place it in a bowl.

You will instantly notice a sharp spike in the volume of the song. This increased volume is due to the sound waves from the phone reflecting against the bowl. As they gather from the sides of the bowl, they are being released in a single direction (upwards) due to the shape of the opening of the bowl.

Similarly, when you strum or play the string of a guitar, it causes the strings to vibrate. These vibrations resonate in the acoustic chamber (body) of the guitar and emerge from the sound hole. This ‘acoustic projection’ is a directional sound that increases the perceived volume of the instrument.

In simple words, people standing in front (facing the sound hole) will hear it better than those who are standing behind the guitar, where there is no sound hole for the sound waves to travel. This explains the function and explains why the size, placement, and shape are important. 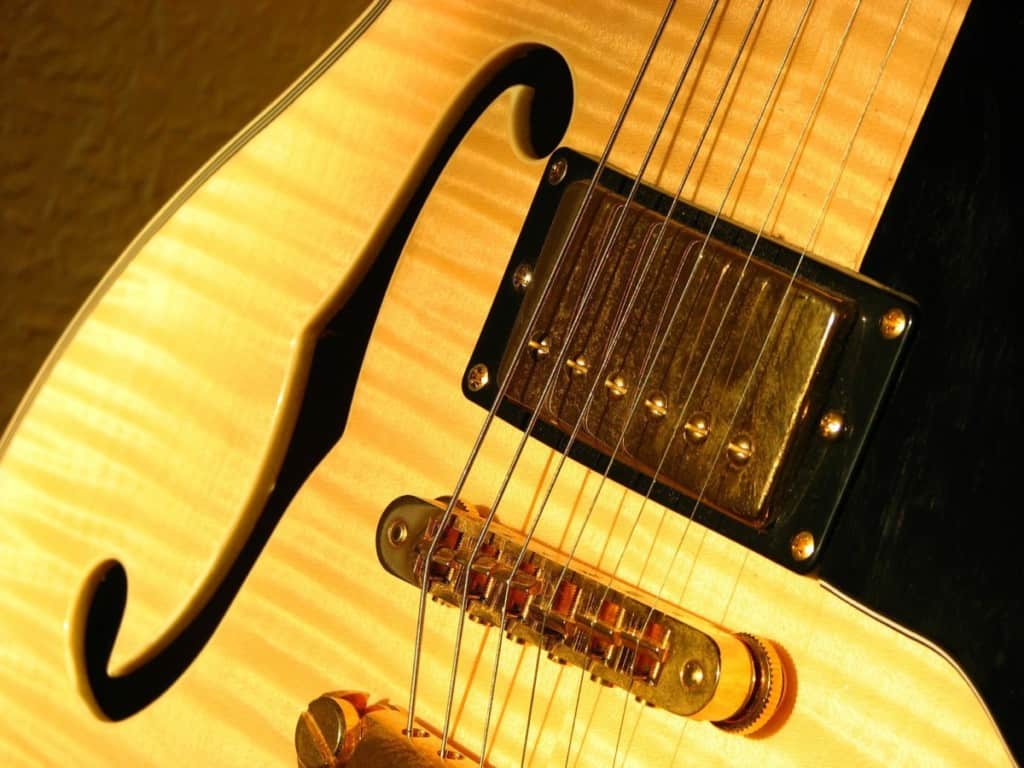 What Are The Different Types Of Sound Holes?

The History Of F-holes In Acoustic Guitars

The origins of the F-hole will lead you all the back to Amati family of violin makers during the Renaissance period in Europe.

They started with some preliminary f-shaped designs that evolved over centuries to turn into what we are privy to today. Some historians claim it was a “craftsmanship error”, while others say it was a play on the traditional C-cut hole in use 300 years ago.

Nevertheless, no one knows the reasoning for the length, shape, or placement of these f-holes was determined back in the day. What we do know is that they found their way into the guitar upper board, especially in the archtop acoustic guitars of the early 20th century.

Frankly, many semi-hollow and hollow body electric guitar designs were derived from the early 20th century acoustic archtops. Back then, F-holes were omnipresent. They were a staple feature in all reputable designs, especially since they played a pivotal part in the sound.

F-holes are not as relevant today and remain a part of the electric guitars more like a lingering aesthetic rather than something that has any sonic relevance. In fact, there was a time when Sir Paul McCartney would paint f-holes on his Gretsch to retain the familiar and prized aesthetic.

Every manufacturer of electric guitars has retained the double f-hole design for contemporaneous models because they struck a chord with musicians.

They have even experimented with single f-hole semi-hollow electric guitars, which for better or worse have not caught on. The following are some famous guitars that have F-holes:

Guitars with only one F-hole: 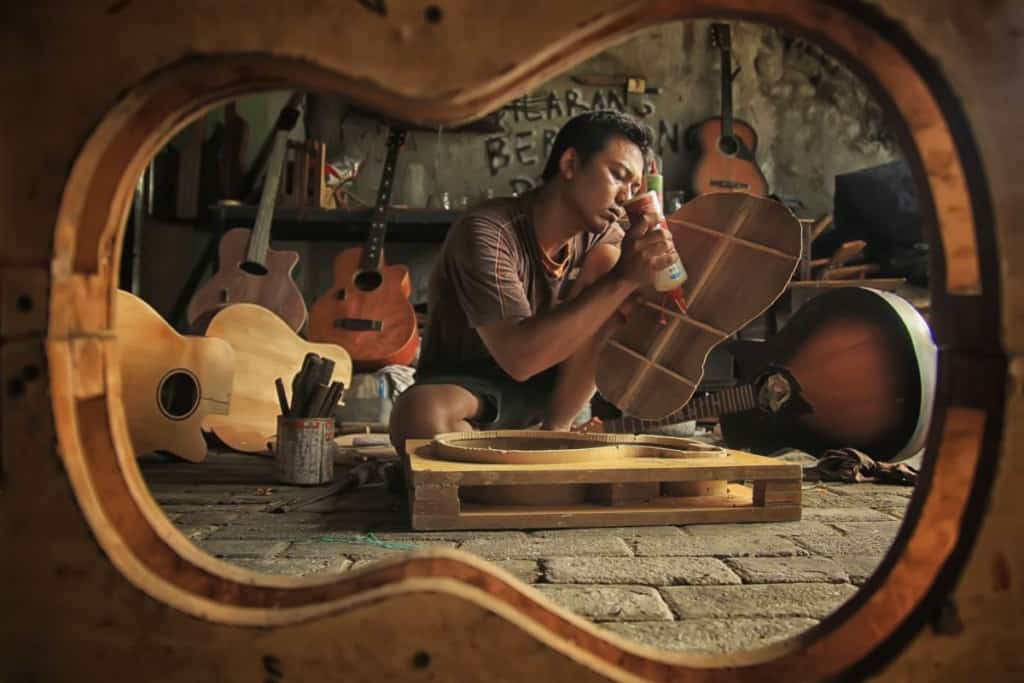 What is the hole on the guitar called?

The cutout circle or hole on stringed instruments like an acoustic guitar is called a sound hole.

It is placed on the upper board of the guitar body and often decorated with a circle called a rosette. Different guitar makers have experimented with the shape and placement of the sound hole over the years, yet the round one under the strings remains the most prevalent.

What is a rosette? Does a rosette have any purpose?

Round sound holes often have a decorative ring along their edge.

This is known as a rosette. Traditionally, the rosette served two purposes, a) it protects the wood on the edges from cracking with wear and tear, and b) it was ornamental and unique to each luthier (guitar maker) who used the rosette design as their “creative identity”.

Why do guitars have a hole in the middle?

The upper and lower parts of the guitar body, aka the sounding boards, are the main source from where the sound of an acoustic guitar emanates.

A sound hole releases the tension of the body chamber to facilitate better vibrations i.e. the soundboards can vibrate freely. The sound hole also allows that sound to be projected directionally, usually towards the audience.

Is an f-hole guitar better than a regular guitar?

According to researchers at MIT, the traditional f-hole is ideal for the most potent and powerful acoustic tone.

In fact, they state that F-hole guitars have almost twice the power of delivering sound as compared to round sound holes found on most modern acoustic guitars. This is also the reason they are found on various other instruments like violins, violas, cellos, and mandolins.

Technically, sound holes amplify the string resonance (vibrations) that is transferred and reflected in the chambered/hollow guitar body of the guitar. Unfortunately, most beginners will know it best as the hole that gobbles up poorly gripped guitar picks.

Be sure to check out my article on the best 21 Guitar accessories, you can read it here.

I hope this article explains the role, function, and reasoning behind why acoustic and electric guitars have a sound hole.