As a guitar player, I am not proud to say that it took me close to ten years to understand and start using my guitar knobs.

But what do the dials on an electric guitar actually do?

The dials on an electric guitar work like an equalizer, they work by cutting out frequencies instead of boosting them. This means that as you roll the dials off, you´ll be taking out of the high and mid-high frequencies from the sound which will emphasize the lows and low-mids.

There are a lot of different tones hidden in your guitar dials, but most of us guitarists are more concerned about effects pedals. Since it really did change my playing style a lot, I decided to write this thorough and complete post about it so every guitar player will know what the dials on a guitar do.

Take a look at my video that explains what the dials on an electric guitar do.

What Do The Dials On An Electric Guitar Do? video

Out of all the guitar knobs, tone knobs are the most underrated of them all.

Most of us just set them to ten and forget about their existence forever. This was me for years and years until I understood that guitar dials were there for a reason. There is a very common confusion, guitar tone knobs are passive and hence, it doesn’t boost any signal, on the opposite, it cuts it off.

What will you get by rolling the guitar tone off? A more beefy sound focused in the low and low-mid frequencies.

Let me tell you a little story about the Fender Telecaster.

When it first came out, it was 1952 and hence it had to compete against big Gibsons to catch the heart of the jazz players at the time.

So, what the great Leo Fender did was to set the tone knob to zero for one of the positions in the 3-way switch and let jazz players enjoy the bass sounds of the otherwise shimmering bright telecaster. In fact, if you ever pick up a Fender Vintage reissue of that guitar, you’ll have to modify the circuit to use the neck pickup with the tone knob. 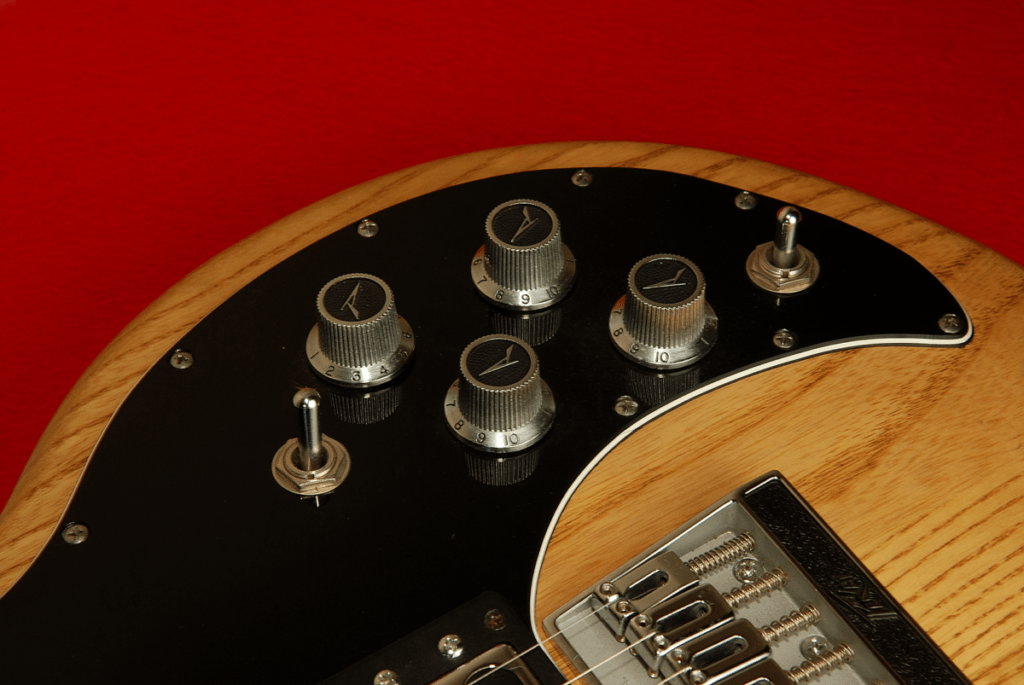 Actually, it is possible to find guitars with no tone knobs, but most guitar dials always include a volume knob.

What does your volume knob do for your guitar? I know what you are thinking: “what a dumb question”, it handles the volume, that is what its name says!” Well, I have to say that you are not entirely correct and that it is a very common mistake many of us make. A volume knob is essentially a “gain” knob, not a volume one.

Let’s do an exercise together: pick up your guitar, plug it in, and set the guitar volume to 10. Play for a minute.

What Can You Do With Your Guitar’s Volume Knob?

Simple, you can dial in the amount of gain you want it to have.

Gain is also perceived as the richness, fatness, fullness of your guitar sound.

If we speak about distortion and overdrive, you can lower the gain “cleaning up your sound” without touching the amp or the pedal, but straight from your guitar´s knob. The moment I realized the number of things I could do with my knobs I was completely astonished how I haven´t used them ever before!

Guitar virtuoso, tone guru, and all-around rock n roll star Joe Bonamassa explains how he can get many sounds out of his Les Paul with the knobs only in this video.

Pickup Selectors And Other Switches

Guitar knobs aren’t the only thing you are going to find on your guitar to tame the sound.

If your guitar has more than one pickup, chances are you’ll have a pickup selector to choose which one (or combination of which) you want to use.

For example, a complex guitar like a Stratocaster that has three pickups has a five-way pickup selector in the shape of a blade. Although if you play a Stratocaster built before 1977 with no swapped parts, you´ll have an original three-way selector.

What a pickup selector does is a routing of the signal mechanically so it will come from the selected source. For example, in a Stratocaster, you can play through the bridge, middle and neck pickups in positions 5, 3, and 1 respectively. You can also have a combination of them in positions 2 and 4.

Coil taps can come in two shapes (at least): as a push/pull knob or as a mini switch.

What do coil taps do? Well, they transform humbucker pickups (two pickups wired together for more gain) into single pickups.

What is the benefit for the guitar players? You can achieve close-to Stratocaster or telecaster sounds with a Les Paul-style guitar at the flick of a switch. Guitar players who have to cover a wide sonic territory with a reduced number of guitars usually benefit enormously from this.

I have recently written an article that discusses 21 of the best guitar accessories. You can check it out here. 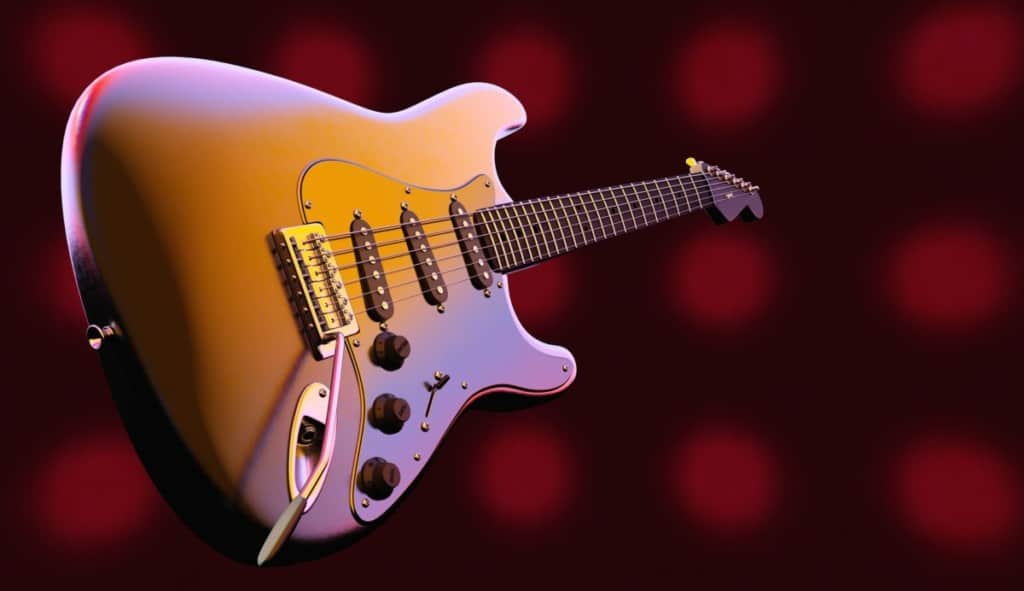 Speaking of guitar dials, it is important for you to know and understand “how do guitar knobs and dials work in the most famous instruments out there”

As stated above, Stratocasters have three pickups, a five-way pickup selector, and then three knobs.

We’ve spoken about the five positions of the blade above already, so you can check that again if you like.

The first of the knobs is your master volume (gain) knob. Then you have two-tone knobs that control the neck and the middle pickup respectively. If you’ve ever played a strat-style guitar, you’ll know that the pickup with the most treble is the bridge pickup.

How come it is the only one not hooked up to a tone knob? Well, this is what many players do as a modification to the circuit; make one of the knobs affect that pickup too.

Super Strats are among the most common guitars in the market, manufactured by many brands such as Ibanez, Schecter, Charvel, Jackson, ESP, Dean, and many more.

They are essentially the shape of a Stratocaster body with modern appointments such as humbucker (sometimes even active) pickups and floating bridges. The configuration of these guitars vary but mainly they feature two or three pickups, a three or five-way toggle or blade and master volume and tone knobs.

The telecaster offers a simpler layout since the guitar dials in it are only a three-way blade and two pickups with master volume and master tone knobs.

Master volume and tone are self-explanatory, they regulate the gain and tone of the instrument in every position of the pickup selector. The three-way blade selects either the bridge pickup, both of them, or the neck pickup.

Setting a telecaster to the bridge pickup with volume and tone in 10 you can achieve the highest level of treble on the guitar. On the other hand, rolling off the tone and selecting the neck pickup will give you the most bass-oriented tone it can make.

Guitar dials in most electric Gibsons follow the same line, so this is good for Les Pauls, SGs, ES, Firebirds, and plenty of others.

They usually feature four knobs and a three-way toggle switch. The three-way switch selects bridge, both or neck pickup. The knobs are two volume and two tone knobs, a pair for each pickup.

So far it is very simple, now the cool part comes with using the layout to create new sounds.

In the case of the telecaster or the super Strats, master volume and tone affects the instrument entirely regardless of the pickup you have selected. In the case of Gibsons, you can set the bridge pickup or the neck pickup separately and use the other without any difference in tone.

For example, it is possible to do the stutter effect (also known as kill switch effect) by turning the volume of one pickup to zero and using the pickup selector. You’ve heard this many times; here is  a video showing how to play a basic kill switch lick

As far as guitar knobs and guitar dials go, the ones you’ve just seen are the most common ones. Getting to know and master them will take you some time and you have more than enough to be entertained. There are other guitar models that use a more sophisticated type of switching; the most common are:

For decades, guitar knobs were the only thing many players had to change the sound of their instruments other than their fingers.

Nowadays, we have pedals, digital modeling, and much more, but adding some knowledge about guitar dials to the modern possibilities could set you apart from the rest and allow you to get more sounds out of your instrument.

Many players still have problems keeping their guitar in tune for more than a short period of time. If this is you then please feel free to take a look at my article on this topic. You can find it here.

I hope you are now clear on what the dials on a guitar do, and feel ready to make even more unique sounds out of your instrument. Guitar-driven music has been around for a long time and will continue to do so for much more.