Phantom power is used for any recordings that are made with a condenser microphone. Also, it is required to provide additional voltage to particular preamps and pedals, but line-level instruments like guitar don’t need phantom power.

Will phantom power damage your guitar?

It’s highly unlikely that subjecting your guitar to phantom power will cause any damage. Guitars are line-level devices that commonly use unbalanced, TS cables. Phantom power can only be sent through balanced cables – in most cases, 3-pin XLRs.

Although the chance of your guitar being damaged by phantom power is unlikely, there are some situations where using unsuitable equipment could put the instrument at risk.

The main factor that could potentially cause harm to your guitar when subjecting it to phantom power, is your choice of cables. In the remainder of this guide, I’ll tell you how to use phantom power safely and to avoid harming your guitar. 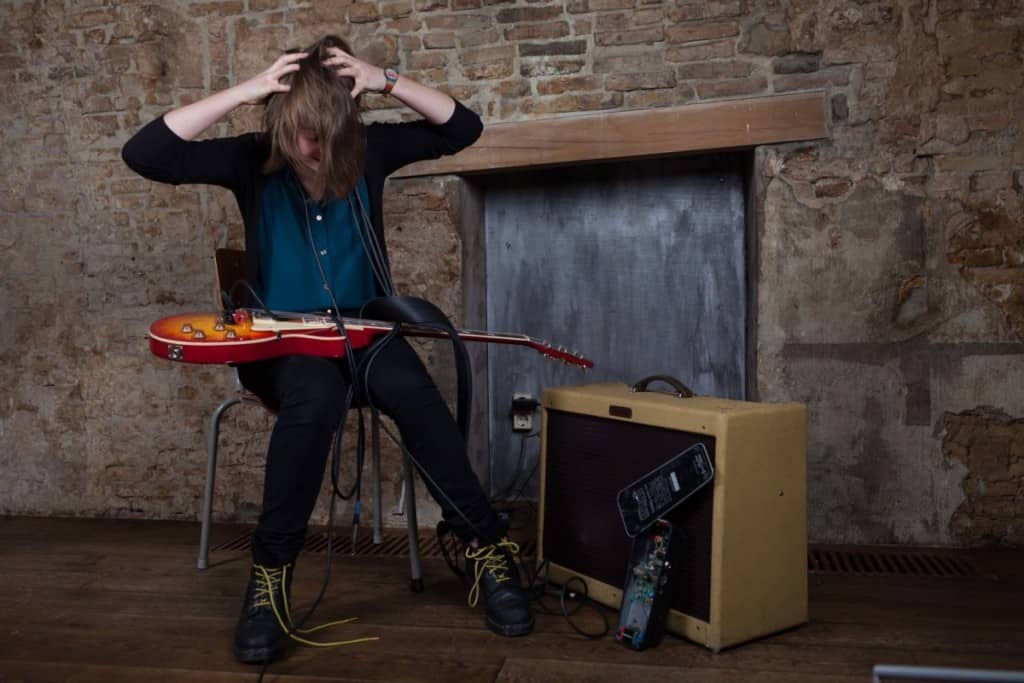 What Is Phantom Power?

Let’s begin by stating the obvious – phantom power is not designed to be used with guitars. Since 1964, it has been used by recording engineers, musicians, and broadcasters to power commercial microphones.

Since then, with audio technology developing at such a rapid rate, phantom power is one of the only elements from vintage recording setups that has remained the same.

In the modern age, phantom power is included on the majority of audio interfaces and can be easily accessed for home recordings.

To get to the bottom of whether phantom power could damage your guitar, we must establish the fundamentals.

Without getting overly technical, phantom power is a positive voltage (12v to 48v DC) that travels through the second and third pins on an XLR cable.

This power is described as a “phantom” because the power source can’t be seen.

It runs invisibly through the same cable that the audio signal is sent through. You might have noticed that your audio interface features a small switch or button that is labeled “+48v” or something along those lines.

When this button or switch is engaged, additional power is generated and sent from the audio interface.

The main purpose that this power is used for is supplying additional voltage to condenser microphones. It is never used for line-level instruments, like guitar, bass, or keyboard.

Unlike guitars, condenser microphones include active electronics that require an external power source to operate. These microphones are typically high impedance devices, which creates a need for a powered circuit to reduce the impedance to an optimal level.

Check out my article on 24v phantom power microphones here.

This video brilliantly explains the purpose of phantom power.

However, line-level devices, like your guitar, will work just fine without it. This is because guitars do not require the additional voltage, due to their impedance level not being particularly high in the first place.

Below you can see a breakdown of common music and recording equipment, and whether they require phantom power.

Neither acoustic nor electric guitars require phantom power. Electric guitars are relatively low impedance devices, which operate at line level. This means they do not require additional voltage to operate.

Likewise, acoustic guitars are also line-level instruments. The only difference is that acoustic guitars do commonly use a pickup which is combined with a preamp, but this device is powered by a 9-volt battery in the majority of cases.

Nevertheless, it’s very common to record both electric and acoustic guitars using condenser microphones. So technically, the guitar may be indirectly dependant on the extra voltage, to capture the full scope of its detailed sound.

When you’re recording guitars or any other instrument for that matter, should you be cautious about accidentally leaving +48v phantom power turned on?

Although it’s certainly advisable to turn off phantom power when you don’t need it, leaving it on is unlikely to damage your guitar.

This is because phantom power can only be sent through the second and third pins in a balanced XLR cable.

Guitars typically use ¼ inch TS cables, which are unbalanced and have a tip-sleeve design rather than the 3-pin design of their XLR equivalents.

When phantom power is used with a condenser microphone, it activates the capsule within the device, which feeds the inbuilt amplifier. It is exclusive to XLR cables, and cannot be used with TS/TRS jack cables.

The reason for this is that TS and TRS jack cables which are commonly used for connecting guitars and other live level instruments have contact points that don’t connect simultaneously.

When you plug a guitar jack cable in, the tip enters the input first, followed by the ring, and then the sleeve. The connection is therefore established one step at a time.

Conversely, when you plug an XLR cable into a balanced input, each of its three pins connects at the same time. This is why XLR cables can receive the additional voltage supplied by phantom power, while conventional guitar cables are not.

In theory, the only way that phantom power could damage your guitar is if you connected it to the interface or mixer using a balanced cable.

All guitars have a jack output, so this would mean you’d need to use a cable that had a male XLR connector at one end, and a TS or TRS jack connector at the other end.

There are practically no situations where this would be beneficial, however.

Therefore, you don’t need to worry too much about leaving phantom power turned on. Although it may cause some unwanted noise to be present in your recordings, the chance of it damaging the instrument is virtually nonexistent.

Monitors also don’t require phantom power, and could potentially be damaged by it if they were subjected to the additional voltage.

To ensure that the monitors aren’t damaged by phantom power, interfaces and mixers are designed so that the outputs and inputs are on separate circuits. It’s common to find that when you turn on the +48v phantom power, it is fed to all of the inputs on the interface simultaneously.

The outputs used for sending audio into monitors or headphones are separated so that the phantom power isn’t sent through them.

This prevents the additional power surge from damaging the monitors or causing unwanted noise to be present in the outputted signal.

The main reasons that phantom power won’t damage a guitar, or any other line-level instrument for that matter, is tied to the subject or unbalanced and balanced signals. Unbalanced guitar cables consist of two connectors, each with two conductors.

The conductors are connected by a pair of wires situated inside the cable – a ground wire, and a signal wire. It’s easy to identify an unbalanced cable by its connectors. Each wire must terminate with its contact point at the connector.

Therefore, unbalanced signals can be sent through a cable that has a connector with only two conductors – like the classic tip-sleeve jack cable used for guitars.

These cables are by far the most commonly used in the unbalanced variety, and they are never used with phantom power.

Balanced cables do have the capacity to send phantom power to a high impedance device.

This is because unlike standard guitar cables, balanced XLRs have three conductors on each connector, rather than two. This is vital for the phantom power to run through the cable.

XLR cables used for microphones have three pins that slot into a plug, and each of the pins forms a connection at the same time. This allows the phantom power to run through the cable and into the high-impedance device to provide it with optimal power.

Using unbalanced jack cables prevents the phantom power from being able to enter the guitar, and therefore practically eliminates the risk of damage.

Does phantom power only work with an XLR cable?

For phantom power to be sent from the source to a condenser microphone or other high impedance device, an XLR cable must be used. This is because balanced XLRs are the only cables that have three pins that all make the connection at the same time.

Phantom power will not directly harm the majority of microphones, however, it should not be used with ribbon mics. The inner components of these microphones can be ruined when they are subjected to phantom power.

Check out my article on ribbon mics here.

Do you need phantom power for USB microphones?

USB microphones are convenient alternatives to using an audio interface. Also, they don’t require external phantom power to operate. These mics get the power they need from the USB connection formed with your computer or laptop.

Check out the popular Audio Technica AT2020 USB Microphone here on Amazon.