The closest partner you will ever have in your studio is a reliable pair of near-field monitors. Learn to know your speakers inside and out and your mixing skills will go to the next level for sure!

It is simply a fact: the more you work with them, the more you’ll understand the nuances of their performance. Indeed, they are, for engineers over thirty like me, the quintessential tools of the trade.

So what are near field studio monitors? “

I always say near field studio monitors are your best friend.

The fact that they are called monitors means that they have a flat frequency response (or the closest they can get to it).

Do you want to know more about studio monitors and why a flat frequency response is vital? I have plenty more to say about them and how to choose and use the perfect pair in your studio. 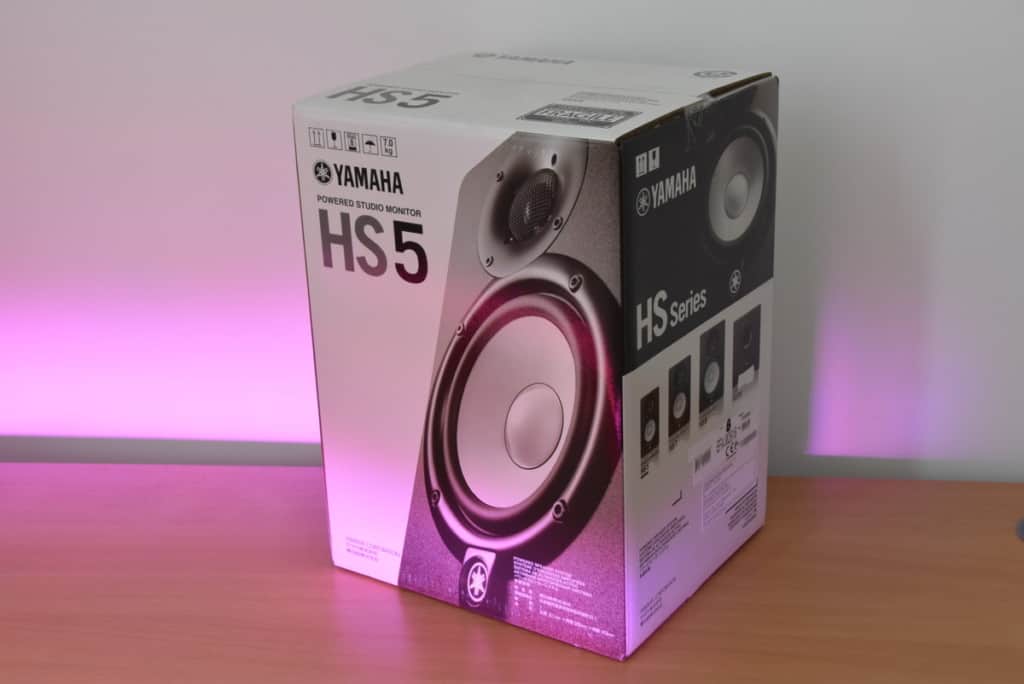 I think it’s always best to start from the beginning. Let’s discuss the different types of monitors and what they are for.

If you have ever worked or been into a big studio, you’ll notice that up to ten feet away from the recording console there are studio monitors mounted into the wall.

Those are what we call far-field monitors. They are usually only found in big rooms since their speakers need some space to sound their best. Also, since they are positioned up to ten feet away from the listener, they need to be louder, they are great for getting the overall feel of the mix and can reproduce those low and sub-low frequencies better without distorting, especially in loud mixes.

My first encounter with far-field monitors was my very first gig as a helping learner in a big studio. I was sweeping the floors and connecting the microphones but will never forget the way the mixing room sounded when everything was on.

I think it was on that very day that I knew I wanted to be a recording engineer all my life. Big, far-field speaker monitors bring life to any mix but you need to have space for them.

After that first experience in a big studio, I went back to my parent’s house and built my own studio in the backyard. As much as I dreamt of a Neve console and three pairs of speakers, all I could afford was my very first pair of near-field studio monitors and a Pentium-loaded PC.

After a little time with my first projects finished, I started understanding the nuances of my speakers (Yamaha HS-5s).

Once this happens with near-field monitors, you’ll start hearing the full frequency spectrum and those tiny performing mistakes you need to fix.

This is where it gets complicated for most people: if you can hear it all in near-field monitors, what are all others for? The vital difference between near and far-field monitors is that only one of them conveys the full spectrum, but the combination gives you the overall feel of the mix.

This is the same as saying: if you are only going to have a pair, then go for near-field monitors.

One great tip I always like to share is “grow your ear before your gear,” with this in mind a great budget set of studio monitors to get started with is the Presonus Eris.

Check out the Presonus here on Amazon

Adding to that set up a pair of far-field monitors is magical because your mixing becomes 3-d. Indeed, what I do now in my studio is mix first on near-fields.

When the mix sounds good, I’ll go for another run only on far-fields. Finally, I put them all together and do the finishing touches (before entering that blissful state that only music can put me on).

You can find this article here. 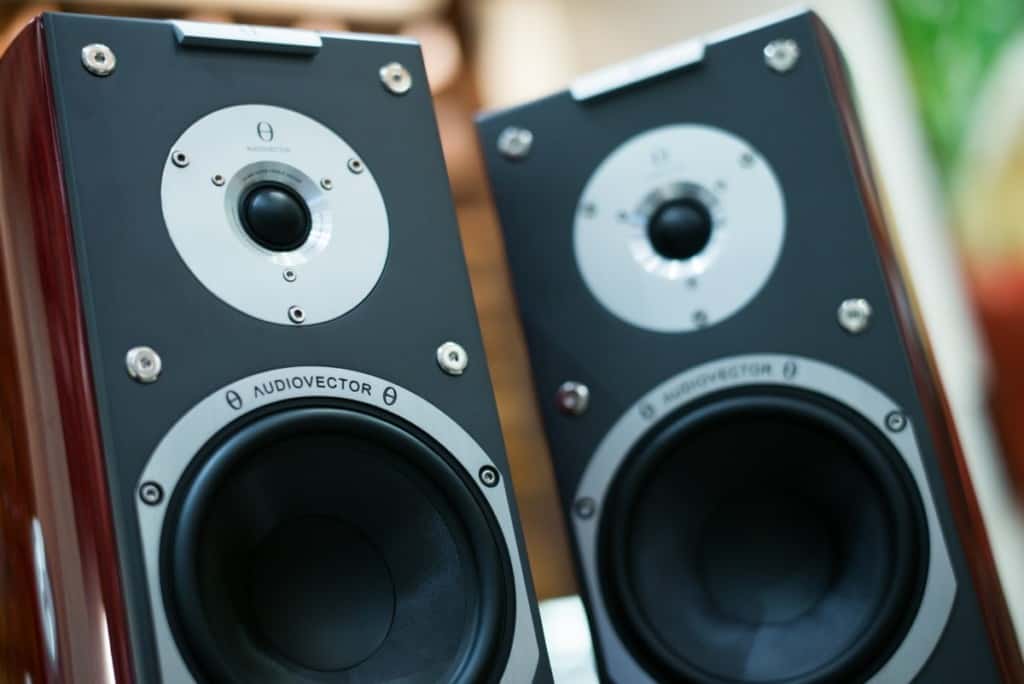 As much as the reasoning is logical, it is flawed.

What audiophiles base their speaker selection on is coloring. They hear the music with a certain color they learned to love. For example, some brands focus more on polishing the midrange and some others work on having a perfectly round bottom end.

If you were to work on music listening to it through those speakers, it would sound amazing… on those speakers. Because of the coloration, moving the mix to a different set of speakers will change the location of the parameters you based your mixing decisions on. The result? A total Frankenstein of a mix that sounds nothing like you intended.

Studio monitors are the boring siblings of audiophile speakers.

And I mean boring because they have a flat response which makes music sound sterile for audiophiles but doesn’t hide any frequencies. Once a mix sounds good on flat speakers, it’ll sound great on all speakers; but it is not a vice-versa operation.

Here is Paul McGowan from PS audio explaining to you exactly why you need flat response speakers.

Speaking about frequency response, it is important to position your speakers in such a way the room doesn’t bias their response. In case you are not familiar with monitor placement, there are plenty of different software and microphone options for calibrating your speakers to your room.

What do we mean when we talk about the famous “triangle”? We are talking about the place where you’ll sit to make the best out of your near-field studio monitors.

The concept is to be the tip of the triangle when sitting in your comfy chair working while the remaining tips are where the speakers are sitting. It all has to be equally distant from each other to form an equilateral triangle. This way, you’ll be hearing the full-spectrum and full-potential of your investment.

You might not have a $1000 setup, but with proper care, your productions can sound killer too.

You might have heard about the sweet spot on many occasions.

What we mean by saying sweet spot is the place in the room where your speakers sound the absolute best. Maybe you weren’t aware of this, but sound travels in waves and speakers behave very much like microphones; moving them around changes the sound drastically.

Once you’ve found the sweet spot (AKA the tip of the triangle) build your studio around it.

A great way to ruin the years of research and development that companies invested in manufacturing your speakers is to let them sit on the furniture.

The phenomenon by which they translate frequencies through vibrations to the room is easy to stop with a pair of good stands.

As I said before, just because you didn’t spend $1000 on a state-of-the-art speaker system doesn’t mean your mixes have to sound bad. Maximize your investment with some inexpensive stands;

Check out the type of speaker stand I use here on Amazon.

Here’s an absolute mixing legend Tony Maserati speaking about how he does it.

Another question I get a lot about near-field monitors is power.

Do near-field monitors need to be very powerful? Well, the answer to that question is relative. Some people like mixing very loud, which can be great to spot that one of the backing vocals is out of tune, for example.

The thing about mixing too loud, though, is that it causes huge amounts of hearing fatigue and also that not everybody will hear it that way when it leaves your studio. My recommendation is to go easy on it and get regular 75-watt or fewer speakers.

If you need more volume than that, it is high time you see a doctor and take a little better care of your ears. You only get one pair for life and are your biggest asset as a mixing engineer. Don’t get too powerful near-field monitors so you don’t even have the option of cranking them.

Before reaching the conclusion this is a matter I think needs to be addressed: size does matter.

You will be offered everything between 3.5 and 12” as near-field studio monitors. The architecture of the enclosure changes drastically from one to the next and bigger is not always better. What does it depend on, then?

Very simple, it depends on your room size. If you are mixing music in a small bedroom 6” should be your maximum and 4” your minimum. If you have a larger room and can place speakers a little further away, then the optimum is to go for fat 8 or 10” speakers. 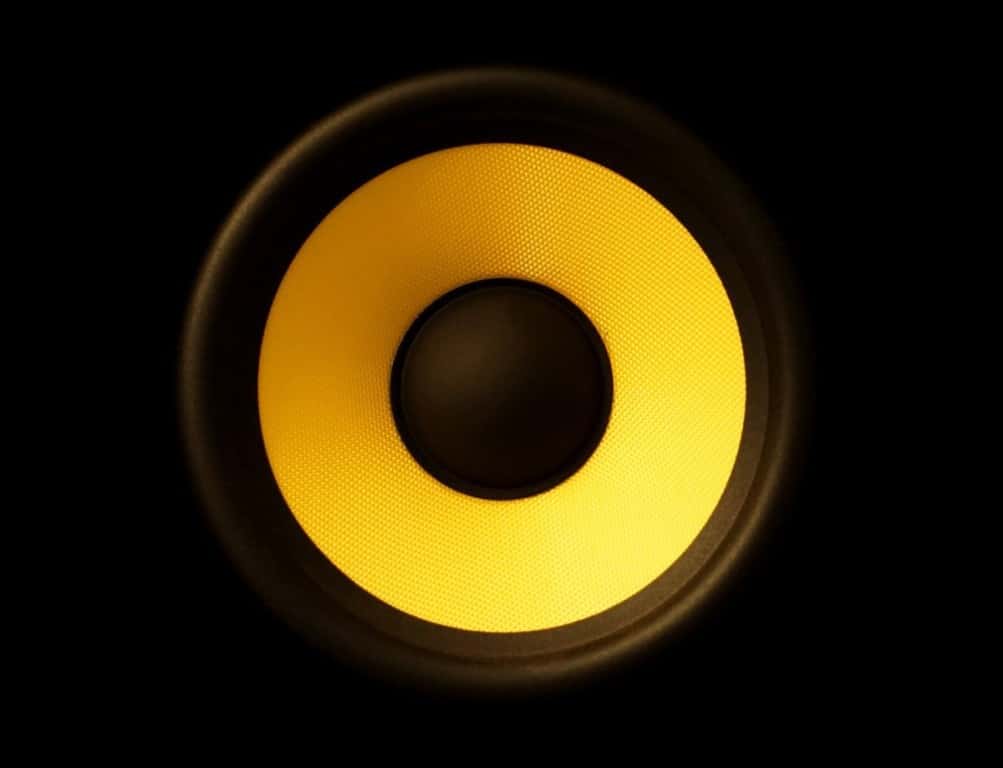 It’s all about the sound.

Companies make a huge effort in making you spend more.

They are not always right. Growing your relationship with your speakers is something that takes some time. Once you do all the room correction and take proper care of your investment using stands, listen to music, and work on music with them.

Getting familiarized with your set of monitors will make you a better professional. Once you are ready to take the leap (if that ever happens), add bigger players to the team and give more depth and dimension to your mixes.

For some of us, near-field monitors are the quintessential piece of our studio. I still have my beloved Yamaha HS5s as a part of a bigger concept and sometimes mix only on them; they feel like home in many ways. Don’t forget to check out the popular Presonus here also.

Grow your reputation one great production at the time and, when the time comes, add far-field monitors. Slow and steady wins the race ten times out of ten.