I’m so glad that Bohemian Rhapsody made it to the big screen and refloated our love for the infinite talent of Freddie Mercury.

Indeed my level of happiness is such that I don’t mind being asked time and time again which microphone Freddie used for those memorable sing-along moments during Live Aid 1985. Although I don’t mind people asking me, I know not everybody has someone like me to ask and it’s only fair that I write this article and make this information available for everybody.

So, which microphone did Freddie Mercury Use At Live Aid?

Freddie Mercury’s live performance microphone was a Shure 565SD. It was and still is a dynamic microphone very close to the legendary 545 Unidyne III model but without a chrome ball grill on the top part. Unlike its successors, it is a silver-plated model and although there is no confirmation from Shure, Freddie’s real microphones were all engraved from the factory with his full name.

Check out the Shure 565SD here on Amazon. 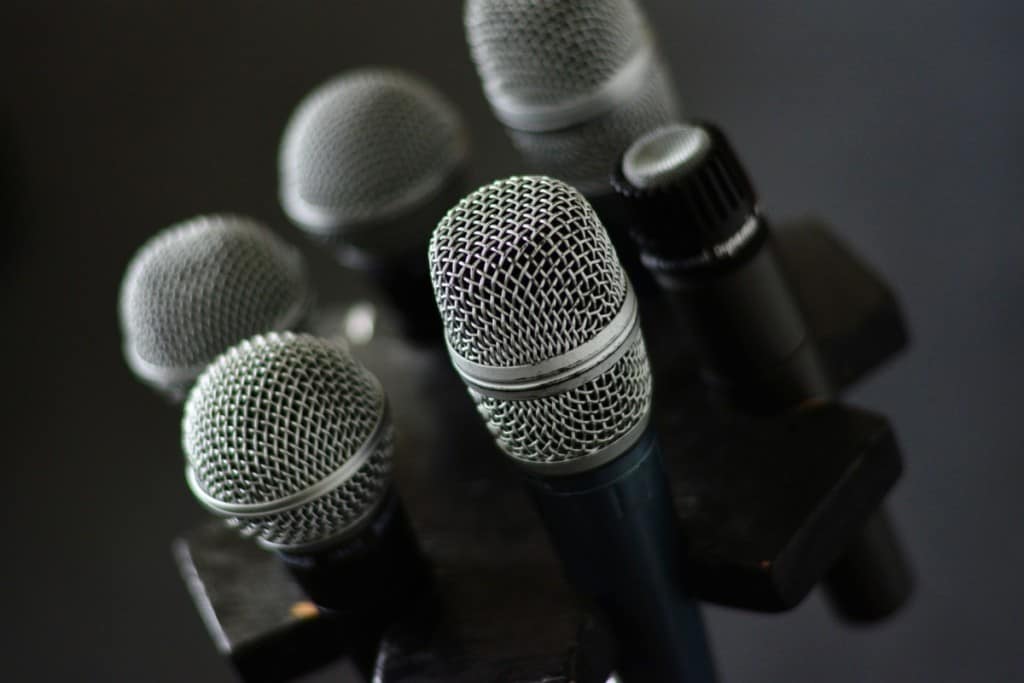 There’s much more to know about the Shure 565SD and the microphones that followed it. Shure is not a synonym of live vocal performances just because they started doing things amazingly well yesterday. Read on and find out the full story behind the legend.

On one hand, it surprises us all that Freddie Mercury at the absolute peak of his popularity would use a microphone that today costs a fraction of the price of some top-class microphones. I mean, he had the budget to buy and use the most expensive microphone in the world and he chose an inexpensive Shure dynamic microphone.

On the other hand, he was one of many music stars who performed on Shure dynamic microphones on the biggest stages in the world. They sound great, are practically indestructible, and you can find them anywhere in the world.

What Makes A Shure Microphone Special?

The Shure 565SD is not what you call an impeccable-sounding microphone. It features some peaks around the 5 kHz that can be annoying or disturbing depending on the voice tone of the user. You can check this rather simple video on which a YouTube user analyzes the frequency spectrum of the 565SD and finds these peaks to be unacceptable.

Why is this important? It is important because the frequency response will determine the microphone’s performance. If it is boosted around 5k, it means that it will pick up those frequencies in the voice of the performer and give them more presence.

Wait, was that Freddie’s secret?

Well, if you can sing the way he did, and want to sound similar, you need to get that microphone. Just don’t expect to turn it on and override years of training and playing a thousand stages before you can shout and an entire arena sings back at you!

Is “Coloring” The Voice A Good Thing?

This is something that needs to be addressed because it generates a little confusion among performers. Coloring the signal is not a bad thing.

All of the most expensive gear in my studio is there because it is capable of coloring the signal beautifully. That is, perhaps, the best part about my ear training: after years of using many microphones in the studio and on stage, I can now match the right microphone to the singer depending on the voice type.

When the coloring and the source go hand in hand, that is exactly where the magic happens.

Why Was The Shure 565SD So Good For Freddie’s Voice?

The 5k boost on the frequency response made the 565SD a unique-sounding microphone.

Freddie had a fantastic range going almost four octaves. What does this mean? It means that with such an amazing vocal register he was able to hit notes in most of the spectrum.

Add to that the colored response of the microphone, and you have an enhanced set of high frequencies that roared from speakers when he sang. The highs made the treble in Freddie’s voice clearer and louder than other microphones of the moment while retaining that flatness in the mid-range. Expressiveness and delivery were the crucial elements of Freddie’s relationship with his beloved 565SD.

Did Freddie know about the coloration on the microphone’s frequency response or just thought it sounded and looked cool? We will never know, but it was a match made in heaven for sure. 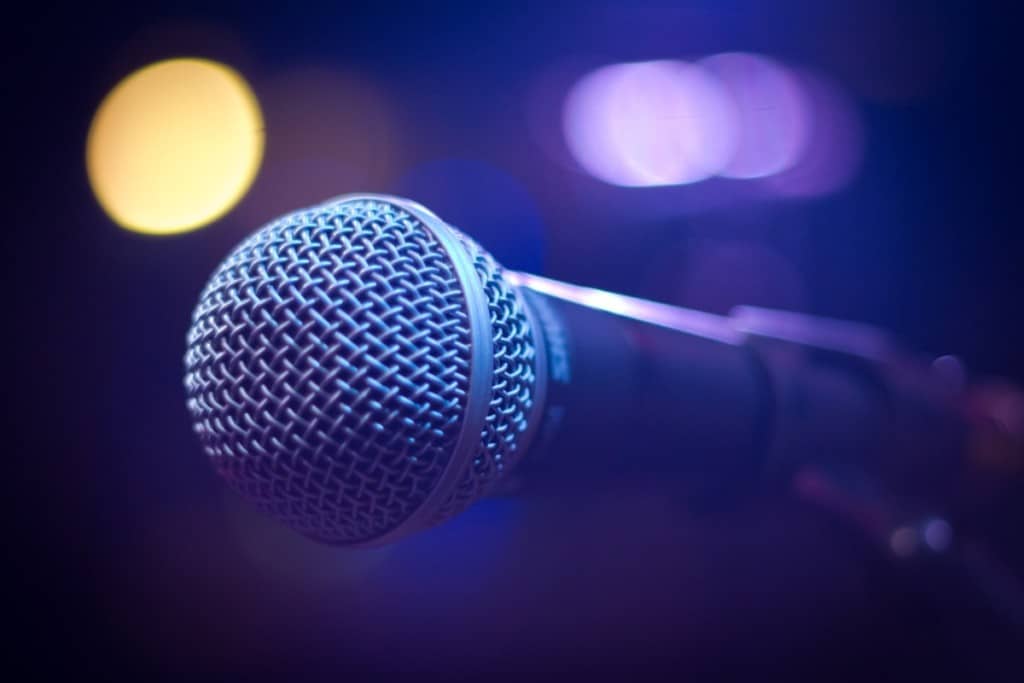 Who Else Used The Same Microphone As Freddie Mercury?

Was Freddie the only superstar using the Shure 565SD on stage? Well, the answer to that question is a big no.

Shure introduced the microphone to the world in 1966 and by 1969; it was so popular that every artist to set foot on Woodstock’s stage benefited from it. This was of course not a random choice, Woodstock was a massive event. The head sound engineer in Woodstock called Bill Hanley chose the microphone because it provided more gain before feedback for the artists.

It looks like that 5k boost the 565D offered performers was truly a competitive advantage!

Why Use A  Dynamic Microphone On Stage?

This is a question I get asked a lot, especially now that several condenser microphones come in hand-held formats.

For example, it is really hard to beat the sound of a Neumann KMS105 microphone. You can check this clip on Youtube in which singer-songwriter and voice virtuoso Ola Onabulé explain just how amazing the Neumann microphone is for a live situation.

Well, no law is infallible, but handling a condenser on a stage without a dedicated sound person who knows very well what he or she is doing can end up being a huge disaster. Dynamics, by design and construction, are made for stages.

They tend to feedback way less and also pick up very little of the noise around them. Finally, dynamic microphones are way more sturdy and resistant to all kinds of abuses during a live show. I mean, check this ancient YouTube video in which people have fun inflicting damage on an SM58 without destroying it. Yes, they drive on it and it still works.

What Is The Modern Day Equivalent Of Freddie Mercurys Live Aid Microphone?

Speaking of the Shure SM58, we can say that it is the heir to the throne for the 565SD. At least, that is what it seems since the world made the SM58 and SM57  the best-selling microphones in music history.

Furthermore, back in the days of Woodstock, the company also had the same pair to offer their loyal fans: the 565SD and the 545SD.

In a long and interesting chronicle about this historic microphone, the Shure company states that the difference between one microphone and the other is only the metal grill on top, sharing the same internal components. This also solves the old enigma about 57s and 58s being the same microphone too.

You can read this chronicle here.

The same YouTube user annoyed about the 5K peaks the 565SD offered, tested it against the SM58, and here´s the result

From Bedroom To Madison Square Garden

Let me tell you a story about someone I know that set her feet on Madison Square Garden’s stage. She is a singer who used to be the backing vocalist for a huge act. She always took her microphone everywhere. I mean, in terms of hygiene and comfort, there’s nothing like singing to a microphone that only took your rouge and nobody else’s.

The big day came along and she showed up at the venue for soundcheck.

The artist was not there yet and she was hanging out with the sound people. She said she always sang into the same microphone for the past 20+ years and out of the blue, the soundman came back smiling with a beaten-up SM58 that looked like it had been a witness at the dinosaur’s meteorite.

It was rusty, scratched, and looked older than all of them. It turned out that the microphone had belonged to Whitney Houston during the early days, before her relationship with Clive Davies.

He recovered it from the audience one night and kept it working until that day. She was blown away by just how the microphone had survived and by holding in her hand the tool one of her all-time idols used to reach world-wide fame.

That night was the only in her career she didn’t sing to her trusty old SM58 which accompanied her from her bedroom to the Madison Square Garden. That night she sang into the Whitney Houston microphone. 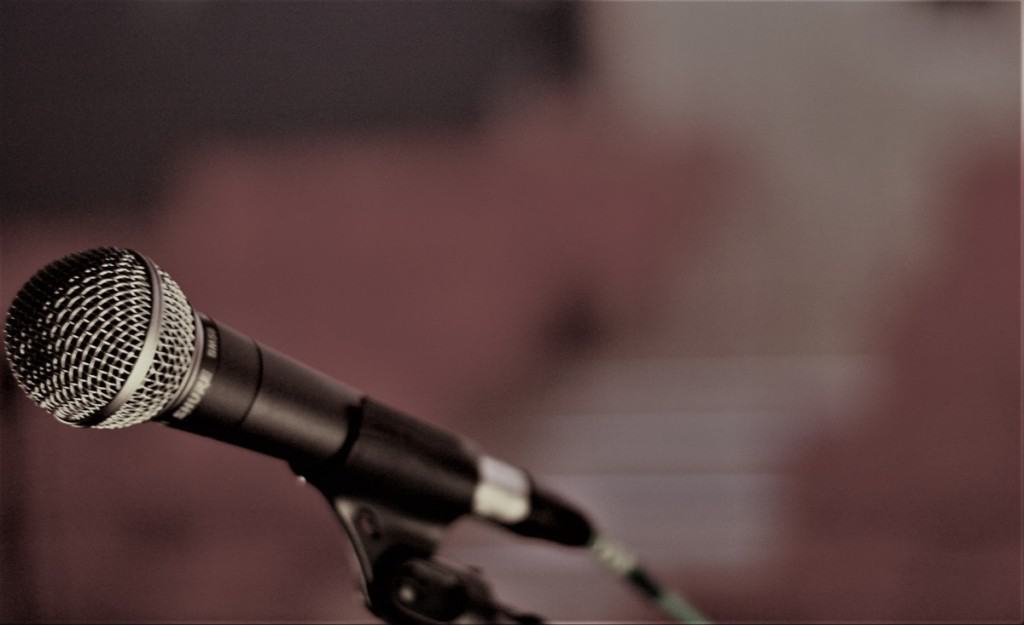 The SM57 is known as “the most versatile microphone in the world”. Mix that statement with the fact that is one of history’s best-selling microphones, and probably most snares and guitar amps you heard in your life were recorded and amplified through one.

Well, it is not surprising to read it sounds absolutely killer in front of a guitar amp, right?

The entire range: 565SD, 545SD, SM57, and SM58 sound great when you put them in front of loud sound sources. Don’t just take my word for it, check out this comparison video. In the final take, around minute 1.40 you can check the added high frequencies for the 565SD.

Which Vacuum Cleaner Did Freddie Mercury Use In “I Want To Break Free” Music Video?

I can’t finish this post without answering this question.

The Hoover /vacuum cleaner used in the iconic music video for the song “I Want to Break Free” by Freddie Mercury was a 1950 Hoover 119 Junior.

I will add that using this Hoover will not give you the same results as Freddie during his own personal domestic chores, just the same as a Shure 565SD will not turn you into an instantly recognizable rock god!

Never forget to grow your ear before your gear!

Having the correct tools for the task is as paramount as rehearsing and learning your instrument. Why did Freddie pick the 565SD back in the day? It could be because it looked cool, sounded great on his voice with those pushy high frequencies, and because it was indestructible as all of its successors.

You might say: it was never about the microphone, it was always about the performer, and you would be right. Let me ask you, though; what if the microphone failed Freddie in his epic performances?

There is a huge range of microphones to choose from these days including USB microphones.

Check out my article on USB vs XLR microphones. You can find it here.

Trusting and knowing your tools makes you a better performer twenty times out of twenty. Sing from your heart through the right tool and the world will look at you differently.