I wrote my first songs and recorded them using the ultra-noisy onboard audio soundcard in my childhood Pentium PC. As the saying goes, some things age better than others and time has been merciless with soundcards.

That being said, I used so many soundcards in my life that I still have a special place in my heart for them and can tell you a thing or two about the newer models.

So, do you need a soundcard anymore?

Every computer benefits from a soundcard when recording audio. The crucial aspect to understand about soundcards is that they can process audio saving system resources for your plugin-filled DAW. Using a soundcard will very likely improve your overall audio experience with your computer.

If you use your computer for multiple purposes including gaming, you’ll be more than pleased with the change.

Ok, music producers of the world, let’s go deep into the soundcard world; are you ready?

Onboard Sound vs Soundcards vs External Audio Interfaces

Let’s begin this journey towards the verdict from the beginning and that is: why were soundcards ever relevant?

Soundcards were a great way to enhance your PC and make it run faster and smoother while enjoying high-definition audio. Most of us used to dream about having the latest Sound Blaster model to play with.

This was mainly because soundcards used to only compete with onboard sound… and that was an easy fight.

As time went by the market got flooded by what we now call “external audio interfaces”.

Starting with the utterly famous fight between the Digi001 and the Maya (external and internal respectively), audio interfaces kicked them out of the ring. Nowadays, even with the invention of PCIe soundcards, it is rare to encounter them in any recording studio in the world.

On the other hand, brands like Sound Blaster got big in the gaming scene and can still offer an amazing option for a moderate amount of money. Can they come back into the ring and continue to fight for the spot they deserve in music production?

I have written an article called “Is a soundcard an audio interface” You can read it here.

This is one of the first things you will notice when upgrading your soundcard.

The electronic noise generated from plugging in anything (microphone, headphones) straight into your motherboard is still noticeable. With noise levels on direct connections being so high and annoying, utilizing a soundcard is a breath of fresh air.

Is that noise level important going into the DAW as well?

Well, let’s say that if you can hear it so can the person listening to your recordings. This goes for all and any endeavors you are after. For example, those who need a very simple setup to do voiceovers or podcasting, or even video game streaming can enhance their results with a new soundcard.

PCIe is the revolution in terms of soundcards. With this new technology, data travels shorter distances and transfers are more accurate since it is connected straight to the motherboard.

What does all this mumbo jumbo mean? It means that you have a greater data transfer rate with a PCIe soundcard than with most USB 2.0 external audio interfaces. To make it clearer in layman terms, it means you have more processing power.

Furthermore, USB technology echoed on this, and some high-end audio interfaces like the Apollo Twin Duo, for example, are equipped with internal processors for added processing power. In the case of this utterly famous piece of equipment, you can buy it with two cores.

Check out the incredible Apollo Twin Duo here on Amazon 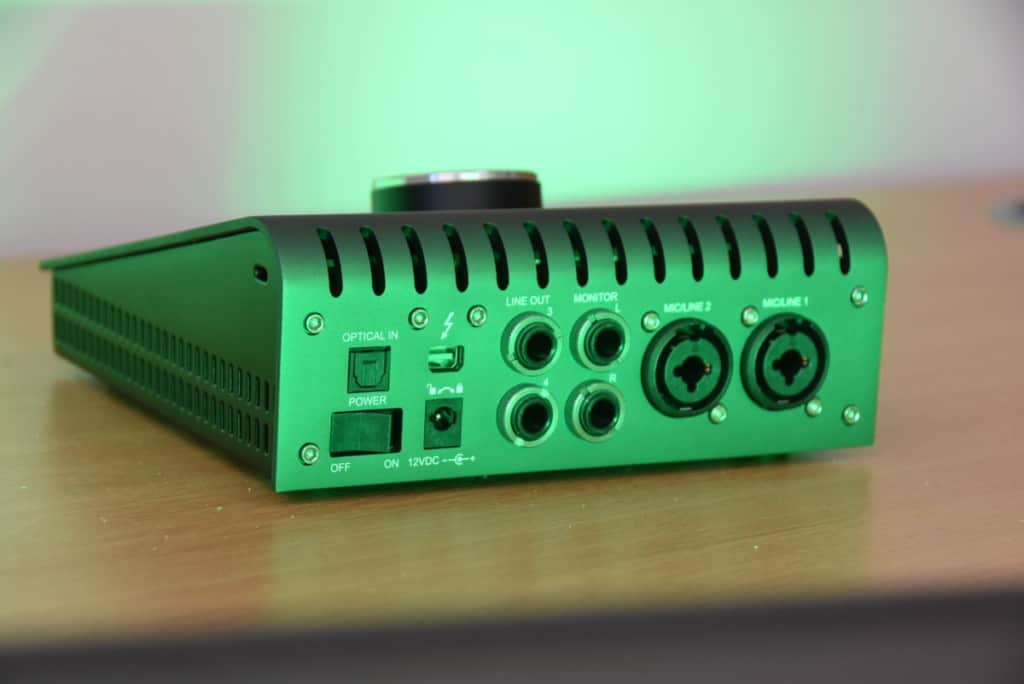 Does A Soundcard Make A Difference In Music Production?

Yes, using a soundcard does make a difference in music production because more processing power is important for running multiple processes at the same time.

For example, the aforementioned Apollo Twin comes with a huge batch of Universal Audio plugins. For every plugin that you run on your mix, you are going to be using your system resources.

Buying a soundcard, or an external audio interface with added processing power will ease the load on your computer and your workspace will flow smoother. Indeed, the lack of processing power can cripple your creativity and force a limit to your imagination.

If you have the budget to go for an Apollo Twin you can also expand it with a UAD Satellite for more processing power; here’s a cool video of how it works.

A great place to start with audio interfaces is the incredible Focusrite Scarlett Solo.

Check out the Scarlett Solo here on Amazon

I have written an article on how to get started with Audio Interfaces. You can find it here.

The New Generation Of Sound Cards

Now that we have addressed the PCIe generation, it is time to talk about the newest efforts made by Creative, the brand behind Sound Blaster. They recently came up with the AE-9 model which combines the best of both worlds in terms of audio.

Although it features many gaming-friendly specs, it also provides a dedicated XLR input with phantom power.

Furthermore, this soundcard provides up to 32-bit of audio quality. It could very easily replace my DAC and power amp in a single unit and still run my entire studio in 24 bits. Finally, it can handle my 600-Ohm headphones through long mixing periods.

I can see myself using it to listen to music and also routing the playback of my recordings through it. Having audiophile-level equipment to listen to your mixes in the studio is a definite must for some projects.

Get Two For The Price Of One

If you are an audiophile a movie lover, or a gamer and use the same computer for multiple purposes including recording audio, buying the AE-9 instead of an audio interface might be the best bet.

You can control up to 7.1 audio and enjoy those avenger fights or game the night away if you please. Buying a soundcard is an outdated purchase but that is what makes prices so competitive.

You couldn’t buy an audiophile-ready, gaming-ready, movie-ready soundcard with modular external controllers, phantom power, and a built-in headphone amp for that price years ago.

Still Not An Audio Interface

The model of Sound Blaster I just spoke about is quite a surprise.

Although I am a fan of soundcards for many endeavors, it still is not an audio interface. This is something I want to make clear because I think it is utterly important: audio interfaces took over the market for several reasons. Let’s look at the most relevant ones:

The list could go on, but I think that it covers the basics and gives you a very good idea of why. For a music producer who wants to use it solely for that purpose, a soundcard is not nearly as good as an external, modern audio interface.

I have written an article on how to record vocals without an audio interface. You can read it here.

My verdict is that if you are serious about music production and want to create a space dedicated to it, you need specific gear. An external audio interface will be the heart and the brains of that setup and hence you should go for the best you can afford.

On the other hand, if you are a music enthusiast who records music as much as you play videogames or watch movies, you should spend that money on something like the Sound Blaster AE-9 and cover all grounds with a single purchase.

In all case scenarios, your setup will be enhanced by the addition of a powerful soundcard. If you are thinking about one or the other, then you should follow the advice above.