Speaker terminals form the connection to a sound source. Some speakers have only 2 terminals, but, commonly, better quality speakers have 4. These cater to a process known as bi-wiring.

So, why do speakers have 4 terminals?

Compared to speakers that have 2 terminals, the varieties that have 4 are capable of bi-wiring.

This is a divisive subject amongst audio enthusiasts, with some claiming it offers numerous improvements to the listening experience, while others dismiss it as being relatively ineffective. In this detailed article, we’ll cover why speakers have 4 terminals and the advantages that this offers.

These speakers were different from previous models, in that they had 4 terminals rather than the usual 2. These four connection terminals on the back of the speakers made bi-wiring possible.

The main reason that 4 terminals are included on some speakers, is that rather than being limited to running a single cable to each speaker, it is possible to use a separate cable for each pair of terminals.

This allows you to split the frequency ranges, sending the mid and treble into one terminal, and the bass frequencies into the other.

There are, however, some downsides to 4-terminal speakers. Compared to traditional 2-terminal speakers, you have to use twice the amount of speaker cable to bi-wire using 4 terminals. Bi-wiring is also not particularly straight forward and requires some effort to set up.

Speakers With 4 Terminals vs Their 2-Terminal Counterparts?

Firstly, the obvious plus point is the marked improvement in sound quality. This is a hotly debated topic, with some claiming that bi-wiring has significant sonic benefits, and others not so convinced.

It is claimed that “bi-wiring” eliminates unwanted distortion from the speaker output. The theory behind this is that the separating of the high and low frequencies reduces the strain on the cables and allows the signal to flow through with more clarity.

A speaker’s woofer, or bass driver, travels astronomically further than the treble of mid-range drivers are capable of.

How To Use 4 Terminals For Bi-Wiring

Bi-wiring is a fairly straightforward process but requires some work, nevertheless.

To start the process, you must first remove the jumpers and acquire two sets of speaker cables. At the end which connects to your receiver or amplifier, the cables will be joined together, while the end that connects to the speaker will be separate.

Check out this pro series speaker cable here on Amazon.

On high-end amplifiers, you may find that there are two sets of speaker connectors, which makes the process of connecting the necessary wires much easier.

The main thing to ensure here is that you use identical speaker cables. That means they should be purchased from the same manufacturer and be carbon copies of each other.

So, once you’ve got your four-speaker cables and you have made sure they are identical, you need to do the necessary checks to ensure that they are in good working condition.

The positive side of the cable mustn’t be in contact with the negative side.

If there are faults with either of the wires and they touch the wrong terminals, this can cause serious damage to your 4 terminal speakers, or even cause your amp to blow beyond repair.

I have written an article that discusses using regular speakers for studio monitors. You can read it here.

Mysteries And Myths Of Bi-Wiring

The only reason that speakers have 4 terminals is for bi-wiring, but despite the opinions from certain people that this process improves speaker performance, there is no concrete scientific evidence to back it up.

In fact, many audio enthusiasts claim that the addition of 4 terminals on a speaker is merely a marketing gimmick created by manufacturers to sell their products.

From an engineering standpoint, there is very little evidence that bi-wiring actually improves any aspect of the speaker’s performance. This raises the question, why would manufacturers create speakers that have 4 terminals if it made no difference to sound quality?

A common argument against the hype surrounding bi-wiring is that the amplifier does not see a different impedance level when driving identical speakers, regardless of if they are bi-wired (4 terminals) or non-bi-wired (2 terminals).

This is where the argument becomes a little confusing.

Indeed, the theory behind bi-wiring does make sense from a logical position. One would expect that separating the electrical signals of the high and low frequencies would in some way cause them to be produced with more clarity.

This argument is backed up by the notion that if the woofer and tweeter share the same wire that is sent back into the amp, then the wire’s impedance would cause the drivers, at their ground reference, to be subjected to some of the signals that are intended for the other driver.

This is accepted as fact, but the debate is around whether the process I just described has any effect on sound quality whatsoever. And like all audio-related arguments, the answer is shrouded in a mist of subjectivity!

One thing that we can all agree on is that speakers with 4 terminals are popular.

Why? Because many listeners do believe that they offer some benefits to the overall listening experience. The argument over whether this is true will likely never be definitively resolved, but that’s the beauty of audio-related debates – everyone is entitled to have a different opinion.

Regardless of whether you think the reasons that speakers have 4 terminals are justified or not, there are some simple practices to ensure that you get the best performance out of them.

Whether you are using the bi-wiring technique or opting for the simple non-bi-wiring, you should ensure that your loudspeaker cables are the same length. If the lengths are different, this can result in imaging issues and phasing problems.

To keep noise to a minimum, there is a general rule of thumb to follow.

When wiring up your speaker’s 4 terminals, you should use the shortest speaker cable possible. Obviously, the cable needs to be long enough for there to be little tension, otherwise wear and tear may occur. But the shorter the cables are, the less unwanted noise is likely to be present in the output.

As I mentioned earlier, when wiring up your 4 terminal speakers, it’s absolutely essential to use the exact same cables.

Regardless of whether you are bi-wiring or not, using the same cables will ensure that their physical characteristics match up, and minimizes the risk of any audio-related inconsistencies.

Cables are often overlooked, but they have a huge impact on the frequencies that are produced by speakers.

Finally, it’s important to use a speaker cable that has a minimum rating of 14AWG. This will ensure that it is powerful enough to perform the role required on a 4-terminal speaker. 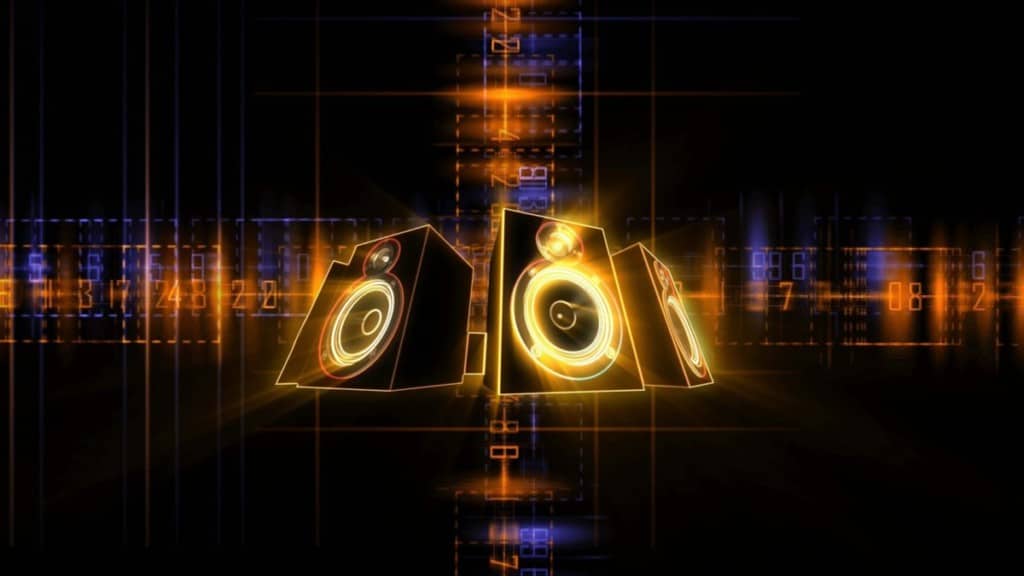 Using thicker speaker wire for long wire runs is recommended. It is also better for high-power applications and speakers that have a low impedance rating. 16-gauge wire is a solid choice for speaker applications.

Take a look at my article that discusses using microphone cables for speakers. You can read it here.

What is stereo imaging?

Stereo imaging describes how spatial locations of sound sources are perceived in an audio waveform. It is a tool that is used by mixing engineers to give certain instruments and tracks their own place within the mix, using the popular technique of panning to achieve this.

Should I use a preamp or a receiver?

Obviously, there is a lot of variation between the individual models of preamps and receivers, but in general, preamps will produce better audio quality. They also offer more options for tweaking the output.

Can A Powered Speaker Power A Passive Speaker? (Explained!) | stampsound.com