Audio interfaces and analog mixers are highly versatile and useful devices. In both recording studios and on the stage, it’s a certainty that one of, if not both of these pieces of equipment will be required.

Here’s how to connect an audio interface to an analog mixer.

Although in theory connecting an audio interface to an analog mixer is relatively straightforward, there is more to this topic than first meets the eye.

To get the best possible audio quality, certain measures need to be taken. In this guide, I’ll cover all of the information you need to connect the two devices most efficiently. 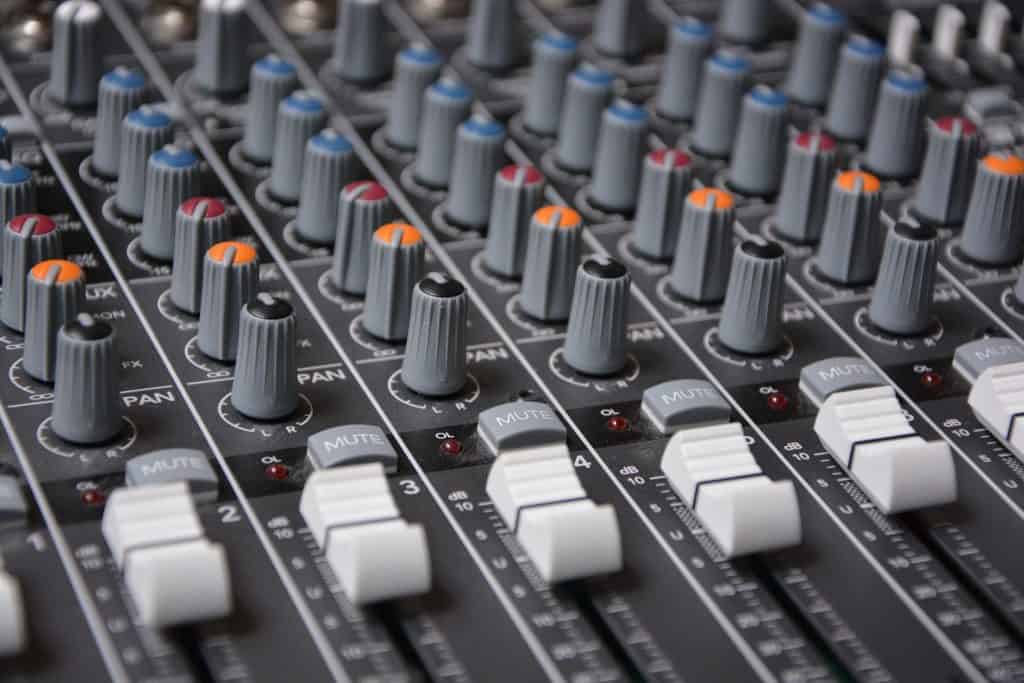 Connecting an audio interface to an analog mixer offers multiple benefits. Perhaps your interface lacks the number of channels you require for everything that you need to record and process.

Or, maybe you’re tasked with recording the audio from a live performance.

This would entail capturing the audio by taking a line out from the analog mixer, sending it to an audio interface, and recording it into a DAW on your laptop.

Whatever your end goal is, the process of connecting these two devices is fairly simple.

The first thing you need to do is identify the relevant inputs and output on your interface and mixer. Then it’s a case of choosing the right cable and forming the connection.

Here’s a step by step breakdown of what you need to do:

On your analog mixer, there are several possible outputs you could use to connect the device to an audio interface.

The best choice would be to use the outputs that are labeled something along the lines of “Stereo Out”, “CR Out”, or “CTRL Room”.

These outputs are line-level, and they will provide you with a high-quality connection between the two devices.

Other outputs are commonly included on analog mixers, so it’s important to differentiate between them, as using the wrong one could at the very least limit the audio quality, and at worst, damage the equipment.

The majority of analog mixers have a pair of RCA cable connectors. Most of the time, these are labeled as “Out” or “Rec Out”. On older models, they may be labeled as “Tape Out”.

These outputs were originally designed to record the audio from the analog mixer to a cassette, or reel-to-reel tape recorder. Conveniently, they are also suitable for connecting the mixer to a modern audio interface.

This means that the audio quality could potentially be diminished, in comparison to using a balanced connection. Nonetheless, using this simple method will still provide decent audio quality.

It may also be tempting to simply use the “Main Output” from the analog mixer to connect it to the audio interface.

This should only be done if your mixer is a line-level device. If you are using a powered mixer, you should avoid using this output as it could damage the interface.

Once you’ve identified the correct output on the analog mixer, you’ll need to analyze the settings on your audio interface.

Many of these devices are fitted with a small switch, which is changed when you want to use a microphone, or a line-level instrument.

In this scenario, you need to set the input to “line”. This decreases the amount of internal gain, minimizing the risk of distortion or saturation occurring when you send audio from the analog mixer to the interface.

This video explains the process thoroughly.

Which Cable Should You Use To Connect?

Now that you know how to connect an audio interface to an analog mixer, the next question that arises is which cables should you use? This requires further inspection, as there are several benefits and drawbacks of each cable type.

Using the method I described above, the simplest way to connect the output from the analog mixer to the line input of the audio interface would be to use a pair of balanced TRS cables.

These cables are ideally sized to fit the ¼ inch output on the analog mixer and to be plugged into the input on the audio interface which is the same size.

The reason that two TRS cables are required, is because you’ll need to connect both the left and right channels from the mixer to the audio interface to get a stereo recording.

It’s advisable to ensure that the audio interface isn’t turned on when you’re forming the connections, to prevent any electrical surges. The gain on the input channels should be set to zero so that the signal doesn’t pass through instantly after turning the audio interface on.

XLR and RCA cables are two other possible solutions you could use. If you have a pair of balanced TRS cables and the in/outputs on your mixer and interface facilitate that connection, then by all means go ahead and stick with those.

However, it’s worth comparing them to RCA and XLR cables, which may come in handy if you are limited in the number of channels you have to work with.

This means that they produce a superior audio quality compared to unbalanced cables, and there is less risk of interference or unwanted noise being present in the output once the connection between the analog mixer and the interface is formed.

These cables were the popular choice back in the day, and consequently, they are popular amongst collectors of vintage recording equipment.

The downside to RCA cables is that they are much more prone to picking up interference and noise, especially when used for long cable runs. XLRs are the most reliable type of cable when it comes to minimizing the risk of noise interference.

If you’re still unsure which cable you should choose, inspect your analog mixer and audio interface.

You might find that one of, or both of these devices only provides you with one connector type. Or, you may discover that all of the other inputs are taken up by other cables, and therefore you must use a particular variety.

The table below summarises the benefits and drawbacks of the three cables I’ve mentioned:

After you’ve decided which cable type is the best choice, and identified the relevant connectors on both the interface and the analog mixer, the last thing you need to do is take care of the gain and levels on both devices.

With the interface switched off, you can connect a microphone to the mixer to set the optimal levels. Firstly, the gain control of the microphone input should be turned to zero before you start.

Then, you can adjust the volume level for the microphone input gradually, until it is somewhere near the middle. The same can then be done with the output that you’ve chosen to send the signal from the analog mixer to the interface.

By speaking into the microphone, you can visually monitor the levels and adjust the controls accordingly.

Ideally, you want the signal that shows in your DAW to be around -20dB. This will ensure that you get a clean signal when recording the audio, with no saturation.

Mixers won’t directly improve the quality of an audio signal – this is impacted more by the choice of cables you use. However, they do allow you more freedom in post-production, which leads to more deliberate mixing of the audio.

What is the difference between a preamp and a mixer?

Preamps are used to prepare a weak signal and bring it to line-level. Mixers, on the other hand, collect several input signals and blend them before sending them to output speakers.

Can you add effects using a mixer?

Many mixers contain onboard effects, such as reverb, delay, and compression. If the mixer doesn’t facilitate this, you can connect external effects units to the FX inputs and add them to the relevant channels.