Mixers are versatile devices that can be used in a variety of ways. Ultimately they are all designed for the same purpose of receiving inputs and sending them to outputs. For this reason, they are staples of recording studios and stages worldwide.

How to (and why) connect a mixer to another mixer?

You can connect a line output to the input of a second mixer. The reason that this is beneficial, is that it allows you to group inputs for monitoring purposes, freeing up inputs on the first mixer. This also provides more options for adding effects.

There’s a lot of contrasting information on the subject of connecting a mixer to another mixer.

Like all audio-related topics, there are multiple approaches you could take to achieve your desired results. 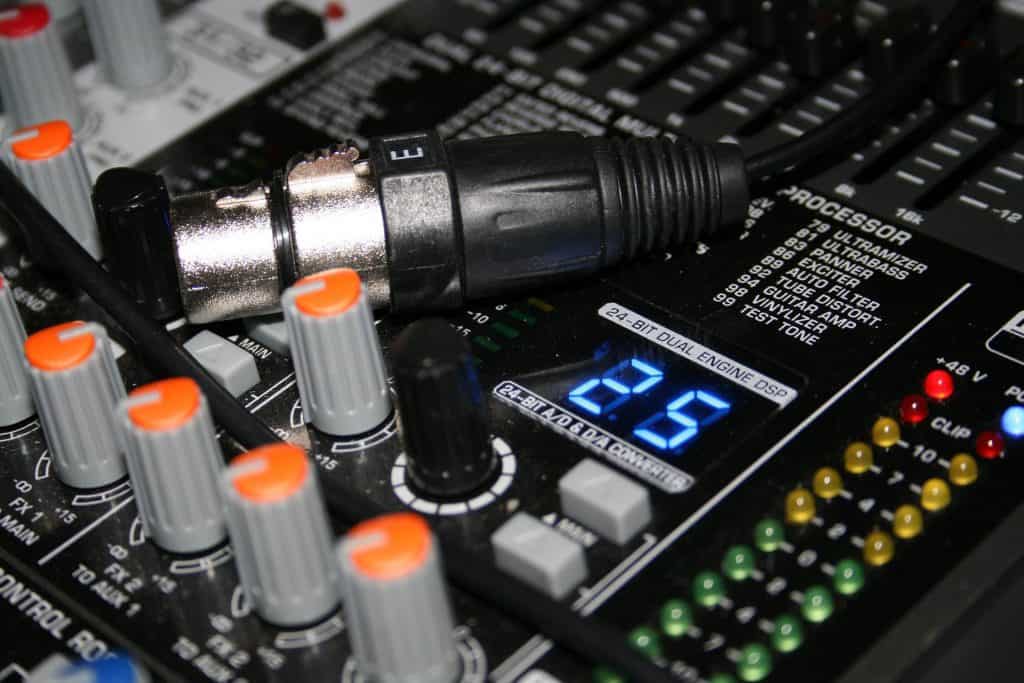 Why Should You Connect A Mixer To Another Mixer?

Mixers have a reputation for being complex devices, but in reality, once you understand their purpose, they are very easy to understand. Every mixer essentially provides the function of combining the input signals from balanced devices (microphones) or line-level devices (instruments).

The mixer then sends these input signals to output jacks, which are routed to loudspeakers or monitors.

Indeed, there is plenty of variation from mixer to mixer. Some feature extensive effects units or additional features like USB compatibility and routing capabilities.

The reason that you might want to connect two mixers would depend on whether you intend to use them for live sound or recording purposes.

In studio situations, mixers are used primarily for taking inputs from microphones or instruments that are being played in live rooms and directing them to the recording rig.

Combining two mixers in the setting would provide you with more channels to use for monitoring, which would be useful if you were recording a large group of musicians, all of whom require their mix outputs.

Generally speaking, mixers are labeled with three numbers that describe their connectivity capabilities. For example, a mixer that is labeled as 24:8:2 would have a total of 24 inputs, 8 output buses, and a 2-channel, stereo master output.

If all mixers are designed to perform the same basic function, then why would you ever need to connect one mixer to another? Simply put, doing this will provide you with a significant increase in options.

It would make sense to assume that using a pair of mixers together will double the number of inputs and outputs that you have at your disposal. Unfortunately, that’s not the case.

You will indeed increase the number of in/outs by connecting one mixer to another, but it’s not as simple as it may initially appear.

Nonetheless, the most common reason that someone would consider connecting one mixer to another would be to increase the number of channels they have to work with. If replacing their existing mixer with a more expansive model is not an option, simply connecting another is a logical solution.

Adding effects to different channels is also likely to be a reason for considering this. If you are constantly frustrated by the lack of inputs and outputs that using one mixer provides, keep reading for some simple and effective ways to connect another, which should solve your problems.

To underline the reasons for connecting the two mixers, you can see the specifications of some industry-standard options below.

How To Connect A Second Mixer

In this section, I’ll describe the most efficient ways that you can connect one mixer to another. Before we get started, there are a few things that should be considered.

First of all, the model and brand of the mixers matter. Primitive models are less likely to have the full range of connectivity options provided by high-end models, so this could impact the way that you can hook up a second mixer to your existing one.

Ideally, to get the best sound quality with the least noisy signal, you should use a sub-mix of your second mixer’s channels, after the input trim. This means that the submix is created after EQ and after the channel level output source.

The submix could then be sent to an auxiliary output.

This means that you can then control the levels of the second mixer’s submix using the auxiliary levels on the first mixer. If this sounds a little complicated, don’t worry, all will become clear.

When the submix of the second mixer is made, this is a mono track that combines all of the relevant inputs channels and sends them to the first mixer. By sending them to the aux output, you can then choose whether you want to mix them to a singular channel or spread them over two channels.

For example, if you choose to use the second mixer as your sub-mixer for drums, bass, and keyboards, you would then need to send the main output into one of the stereo return channels on your first mixer.

Doing so would leave you with all of the existing inputs on your first mixer still available. You could then control the levels of the sub-group containing drums, bass, and keys, using the main level fader on the first mixer.

To do this, you should use the line inputs on those channels, and form the connection with balanced ¼ inch TRS cables.

One of the most common drawbacks of connecting one mixer to another is the potential for unwanted hum in the output signal. In a live sound or recording scenario, this is highly undesirable as it will diminish the overall audio quality.

When you connect any analog equipment, there is a high risk of hum and noise. Sometimes, it can be difficult to identify where the issue stems from, but there are some effective ways to troubleshoot and remove the problem.

One of the easiest solutions is ensuring that both of the mixers are connected to the same power source. This may mean you have to run a long extension cable to one of the mixers, depending on the distance between them.

Another common cause of hum when connecting two mixers is the ground loop. Thankfully, there is an easy way to combat this, which is known as a “ground lift” or “earth lift”.

A ground lift is a common feature on many modern mixers. It is usually presented in the form of a switch, and it is a great solution to signals that are plagued with unwanted hums or other electrical noise issues.

Ground lift switches are not exclusive to mixers – they are also commonly found on any other audio equipment which disconnects the audio signal ground from the earth ground, such as splitters.

If you find that connecting a mixer to another mixer has left you with a noisy output signal, the first thing you should do is check whether the mixers have onboard ground lift switches. If they do, the chances are engaging this will put a stop to the problem.

For connecting the seconding mixer to the first via the relevant inputs, you should only use balanced TRS cables. The majority of inputs on a mixer are ¼ inch in size, so this type of TRS cable is the best option.

Using an unbalanced cable to connect the mixers will exacerbate any noise issues you encounter. Swapping them for unbalanced cables will minimize any hum or unwanted noise, and provide you with the best signal quality possible.

I’m often asked if you need a mixer as well as an audio interface. In fact, I was asked so many times a wrote an article on this very subject! You can read it here.

How do you connect external effects to a mixer?

One of the great things about mixers is that it’s really easy to hook up external effects to their input.

What is a stereo return on a mixer?

Does a mixer improve sound quality?

Although sound quality is not directly improved by using a mixer, if it includes a high-quality mic and instrument preamps, this will improve the tone. A mixer gives you more control over each aspect of the inputted signals, so you can deliberately shape the sound.