When recording, the common aim is to capture vocals with as much clarity and isolation as possible. Vocal booths are used for this purpose. It’s not always possible to access one, so singers and engineers may need to get creative.

Can you record vocals in a car?

Cars have the required attributes to make an effective vocal booth. The relatively small space, sound-absorbent materials, and the lack of parallel surfaces which could result in standing waves make a car a realistic possible location where you can record vocals.

Granted, just because you can record vocals in a car, doesn’t mean there aren’t other factors to consider.

Recording vocals in any setting requires pre-planning and establishing the results you’re aiming for. Although a car can be an effective place to record vocals, this will be impacted by the specifics of the vehicle, its materials, and dimensions, which I will discuss in detail in this article.

Recording Vocals In A Car: The Essentials

To record vocals with pristine clarity, you need an environment that absorbs and isolates the sound.

If you’re going for a vocal sound that is airy and distant, then a car probably isn’t the best option. However, if you want to capture tight and clear vocals without needing to access a recording studio booth, a car is a great solution.

The problem with just setting up a microphone without considering the acoustic environment is that you are likely to end up with unwanted noise in your recordings, or certain frequencies becoming too harsh or too weak.

Acoustics are often overlooked by bedroom musicians, but they do play a pivotal role in the final recording.

Indeed, it needs to be stated that all cars are different.

The materials used for the seats, for example, will dramatically alter the acoustics within the car. Leather seats are unsuitable for recording, as they will reflect the sound and cause sonic chaos. Cloth or fabric seats, on the other hand, are better suited due to their ability to absorb the sound.

The majority of cars are lined with around 50% sound-absorbent materials.

Although this isn’t as extensive as a professional vocal booth, it still makes a huge difference to the quality of a recording. To further improve the sound absorbance, you could isolate the back seats of the car using a large blanket or curtains. This minimizes the effect of the windscreen and prevents the glass from reflecting the sound waves into the microphone.

In the table below, you can see a summary of the reasons you can record vocals in a car, and some of the potential pitfalls to look out for.

As with any recording environment, there are positives and negatives.

You certainly can record vocals in a car, but it’s not the best option by a long shot. However, sometimes when you get inspired, you might not have access to a studio or isolated vocal booth, and in that instance, a car is a great makeshift solution.

There are also other factors to consider when discussing whether or not you can record vocals in a car. For example, you will need an audio interface, microphone, and laptop. It’s possible to use all three of these devices without the need for mains power, but not all interfaces and microphones will have this capacity.

Unless you have a mains extension cable nearby, your laptop will need to have sufficient battery life for the duration of a vocal recording session.

Most decent laptops do provide a couple of hours of unplugged battery life, but this depends on the particular model, its age, and condition.

Providing you are using a condenser microphone which is the standard for most vocal recordings, your interface should provide it with phantom power. A microphone will rarely need its power supply separate from the interface or mixer, so this isn’t likely to be a problem.

I have written an article on how to get started with Audio Interfaces. You can read it here.

Acoustics When Recording In A Car

Now that we’ve established that you can indeed record vocals in a car, we need to look at the acoustics that will impact the quality of the recording.

Vocals are tricky to record because they are often the centerpiece of a song. Ensuring that they are captured with accuracy and clear definition is vital, especially when it comes to mixing them afterward.

So what exactly are acoustics, and why do they affect whether you can record vocals in a car successfully?

Without getting too technical, the acoustics are the way that an environment (in this case a car) interacts with sound waves. Variables such as dimensions, angles, materials, and projection are all contributing factors.

In an ideally-designed vocal recording booth, all of the measurements would be taken, and certain equations would be done to determine the best positioning of sound-proofing panels, whether to place to microphone, and other aspects of the room would be considered.

A car is pretty limited when it comes to how much you can adjust its acoustics.

Thankfully, because cars are relatively small, lined with sound-absorbing fabrics and other materials, and well-isolated from outside noise, they naturally make decent vocal booths. This is explained in this video by renowned microphone experts, Rode.

Nevertheless, there are certain measures you can take to improve the results of recording vocals in a car.

If the front cab includes a lot of reflective materials, like plastic linings and, obviously a windscreen, you could isolate that area using blankets to prevent the sound waves from entering.

The only downside to this is that you may be left with limited space to set up the microphone and comfortably record.

Another way to potentially improve the acoustics would be to recording with the car inside a garage or enclosed space. This further isolates the sound and minimizes any spill creeping into the vocal recordings from sound sources outside of the car.

Space & Positioning When Recording In A Car

Another factor that will impact how easily and effectively you can record vocals in a car, is the amount of space.

You will need to have adequate room for your recording equipment, in addition to cables, stands, and potentially lyric sheets. For this reason, it may seem logical that a larger car, or van, would be the best option for recording vocals.

This is not the case, because the larger the vehicle, the less isolated the recording will be.

Vocalists need to be comfortable when recording.

If they are cramped, the diaphragm will be unable to project their voice with full power. Consequently, the car in question needs to be tall enough for them to sit up straight with their spine erect, and to not feel claustrophobic.

Pre-planning is therefore essential when deciding whether or not you can record good enough vocals in a car. Perhaps using a small desktop mic stand, like these, would be a better option than a full-sized one, and shorter XLR cables may save some space too.

The car seats may need to be adjusted or folded down if possible, to maximize the space available. All of these things need to be considered before you start recording vocals in a car, to avoid time-wasting and disappointment.

If you want to record vocals that sound natural and plan on using minimal processing afterward, a car isn’t the best option. For this style of vocals, it’s better to use a real vocal booth to avoid problems with unpredictable frequencies or other sounds that can occur when recording in a car.

On the other hand, if you plan on using plenty of effects on the vocals, it shouldn’t make much of a difference.

The more you process vocal tracks, the less important factors like acoustic treatment and frequency responses become. The effects essentially hide the inconsistencies and make them less noticeable. 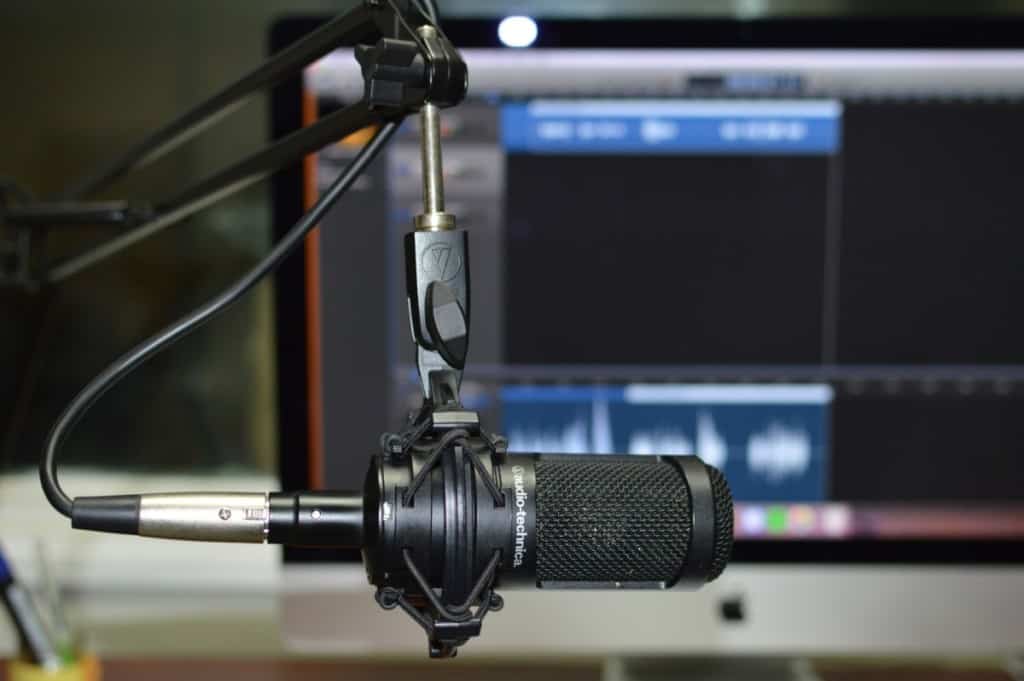 Related Questions On Recording Vocals In A Car

Are dynamic or condenser mics better for vocals?

Condenser microphones are most commonly used for recording vocals. This is due to their clarity, and accuracy in the mid-high frequencies. Conversely, some prefer dynamic microphones for their less refined sound.

Check out the Audio Technica here on Amazon.

Can you fix bad vocals takes with EQ?

EQ can be used to remove problematic frequencies from a vocal recording. It can also be used to hone in on “sweet spots”. Although, it can’t fix any pitch or dynamics issues that are present in the take.

Can you record vocals in a bathroom?

Depending on the materials in the bathroom, they can make good vocal recording booths.

This is not the case if you are aiming for clean and polished vocals, but bathrooms often produce lots of reverb with a short decay, which is a popular effect for vocals. Many of Michael Jacksons’ backing vocals were recorded by Bruce Swedien in a bathroom where he stood with his back to the glass shower screen!

Experimentation is key and there are no right or wrongs in music. Go experiment and have fun, who knows, the car may work out perfect for your vocal endeavors!