Sound cards are inner components of a computer or laptop that is responsible for processing audio files so that they can be played through the speakers. These devices vary in their capabilities and efficiency.

Do sound cards cause lag?

Although it is uncommon, in some cases, soundcards can cause lag. These devices use the computer’s CPU to process audio and make it audible through a pair of speakers. This means that they have the potential to take away some of the processing power from the computer.

In addition to the sound card, there are many other common causes of lag.

It usually occurs due to the CPU being overly taxed. Although sound cards do use CPU to playback audio, they shouldn’t use enough to cause frequent lag issues.

In the remainder of this article, we’ll delve into the ins and outs of whether sound cards cause lag, and how this can be solved.

Sound cards are the unsung heroes of a computer audio playback system.

Laptops and computers all come with inbuilt soundcards, and most people never have any need to replace or upgrade them, so they often get overlooked in terms of importance.

The truth is, without a soundcard, a computer would be incapable of playing any audio at all.

So whether you’re a music producer, recording engineer, gamer, or someone who simply likes to watch videos on their device, you are indebted to the invention of the sound card!

The reason that sound cards do, in some cases, cause lag, is because of the process that they perform and the power that it requires to get the desired results.

What Exactly Is A Soundcard, And What Does It Do?

A sound card is technically an optional component within a computer.

If you were to remove the soundcard, then the computer would be incapable of producing audio, unless you used an external device like an audio interface or headphone amp.

Check out this popular audio interface on Amazon.

The sound card essentially converts the digital signal that is outputted by the computer, which is presented in the form of a series of 0s and 1s, and then translates that signal into an analog audio wave. This analog audio wave is then picked up by the speakers or headphones.

Playback devices like speakers and headphones are incapable of playing a digital audio signal.

Therefore, the soundcard is essential, as it converts the signal into a playable, analog format. Without this device, there would be no audio coming from the speakers.

Soundcards are pretty much always installed internally and are connected to the computer or laptop’s motherboard, this explains why they can sometimes cause lag.

Take a look a the Soundblaster soundcard here on Amazon.

Unlike externally-connected audio devices like preamps, headphone amps, or DACs, sound cards are part of the inner workings of the computer.

This means that they run off the processing power of the computer, rather than powering themselves, as the aforementioned devices do. They are connected to the motherboard via a PCI or PCIe card slot. These connections allow the soundcard to supply the speakers with adequate power.

Because the soundcards are connected via these slots, they require no external cables or wires. This makes replacing or upgrading your soundcard, perhaps to a more efficient one that is less likely to produce lag, an easy task.

If lag is occurring, it’s important to properly diagnose the cause.

In the following paragraphs I will discuss some of the other causes of lag that are more likely than sound cards, and also suggest ways to improve the performance of your sound card if it is causing you issues.

Feel free to take a look at my article called “Is a soundcard an audio interface” You can find it here. 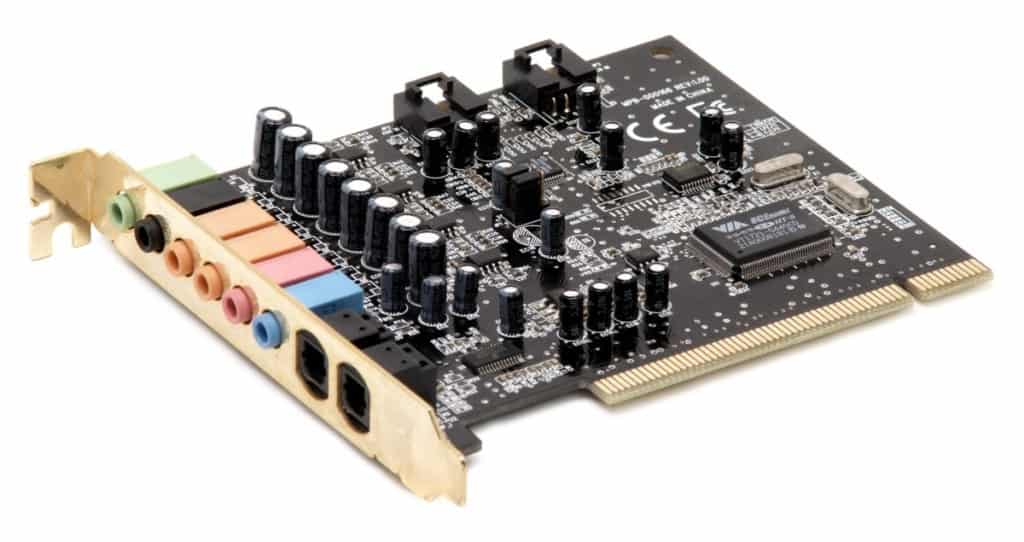 Here’s a summary of soundcards:

The Main Causes Of Lag When Recording

Although sound cards can cause lag, other reasons are more likely, and these should be checked before you rush into replacing your sound card.

If you suspect that your sound card is causing lag, the first thing to try is simply restarting the computer. A computer’s operating system allocated RAM (random access memory) to all of the programs that are running, whether in the forefront or the background.

Eventually, when the computer is running too many programs, the RAM will reach its full capacity, causing lag. Sound cards do use RAM, so it is entirely possible that they could be contributing to the lag.

Within the disk drive on your computer, there is a swap file.

This file is used by the operating system when the RAM runs out of space. The issue is, these swap files, whether they are hard drives or SSD’s, is significantly slower than the RAM, and therefore, when the computer is forced to use a swap file, it often causes lag.

Restarting the computers refreshes many of its processes.

For starters, it will turn off the sound card momentarily. It also closes any other programs that may be running in the background. You might not even be aware that certain programs are running, because they may be set to automatically open upon startup.

The soundcard does automatically open, but closing it down permanently is not an option unless you have no desire to play audio from your computer.

Other programs, which are not essential to the running of the computer, should be closed down to see if they are contributing to the lag.

Restarting the computer also allows any necessary updates to be installed, which can help speed up the system. There may be bugs that need fixing, and restarting is a great way to provoke your computer into dealing with these unseen issues.

If you identify programs that are automatically starting when your computer or laptop is turned on, it’s a good idea to go into the settings of these programs and turn off the auto-start feature.

Be careful not to do this with your soundcard, however, as it is unlikely to affect the lag significantly and you need it for audio playback.

Here’s a video that shows you how to turn off startup programs in Windows 10.

Another effective way to combat lag is by cleaning up your hard drive.

Sound cards are internally installed to the computer’s motherboard, and therefore don’t impact the performance of hard drives. However, when a hard drive is full, it can cause lag issues because the operating system lacks the free space to run efficiently.

Space on a hard drive is required to perform various functions, including preventing fragmentation, creating temporary files, and swapping files.

All of these processes are vital, and when there is little space left on the hard drive, the computer has to work excessively to carry them out, causing lag.

A sound card is exempt from this process, so you don’t need to worry about that.

A quick way to assess whether it is a lack of space on a hard drive that is causing lag is by checking the properties of the drive. If there is less than 500MB of disk space available this is likely slowing down your system.

Here’s a video that shows you how to check this.

Using multiple drives is a good solution to provide the computer with more space to perform its vital functions.

Also, simply going through all of the files on your computer and removing any that you don’t need is an effective way to free up some space.

When deleting files, it’s important to leave vital programs and devices, like a sound card. Deleting vital system files and programs can lead to many undesirable issues that can be complicated to solve, and far exceed the inconvenience of lag.

Overall, although it is certainly possible that your sound card is contributing to the lag on your computer or laptop, it’s a good idea to try the approaches I’ve outlined in this article before tampering with the audio device.

The table below shows the most common causes of lag on a computer and the easiest and most effective way to combat them.

How do you connect external sound cards?

External soundcards are great tools for improving the audio performance of a laptop, and they can be connected by USB. There are many USB sound cards available, all with varying qualities.

In the majority of cases, graphics cards don’t affect the audio in any way. However, some plugins and video games put a significant strain on the graphics card, and this can also result in the audio being affected.

How much RAM is required for music production?

Music production is surprisingly not too taxing on your computer, and therefore 8GB of ram should be enough for most DAWS. If you’re running lots of plugins, opting for 16 or 32GB of ram may be a better option.

I hope this article helps you eliminate lag and gives you a clear plan of action to resolve any problems you may be experiencing.

Take a look at my beginner’s guide on getting started with soundcards and audio interfaces. You can find it here.

Is A Soundcard An Audio Interface? (Explained!) | stampsound.com

[…] famous with gamers and audiophiles around the world. The physical differences between them are that sound cards are internal and audio interfaces external. Both serve the same purpose in their own […]

Can A Soundcard Overheat? (Read This First!) | stampsound.com

[…] Sound cards can overheat beyond fan control because of 12 hours of rendering non-stop, for example. Make sure you let that be handled by a rendering farm and protect your investment. […]