Amplifiers are an essential component in any audio setup, along with a receiver, and the speakers. They are tasked with amplifying the audio signal and transmitting it to the playback devices.

Can you connect an amplifier to another amplifier?

A simple method you can use for connecting one amplifier to another amplifier is by employing an active crossover. This device separates the high-end frequencies of the audio from the bass frequencies so that they can be sent to separate amps and thus different speakers.

Also, it depends on what your end goal is. There are a few ways you could potentially do this.

The simplest method would be to use an amplifier switch. This allows you to connect two amplifiers to speakers, but only one can be used at any given time.

If you’re hoping to connect an amplifier to another amplifier and use both of them simultaneously, there are two additional methods you could use.

Firstly, you could employ an active crossover, or you can use a device known as a surround sound processing unit. Each method varies in terms of complexity, and in this guide, I’ll describe them in detail so that you can decide which is best suited to your needs. 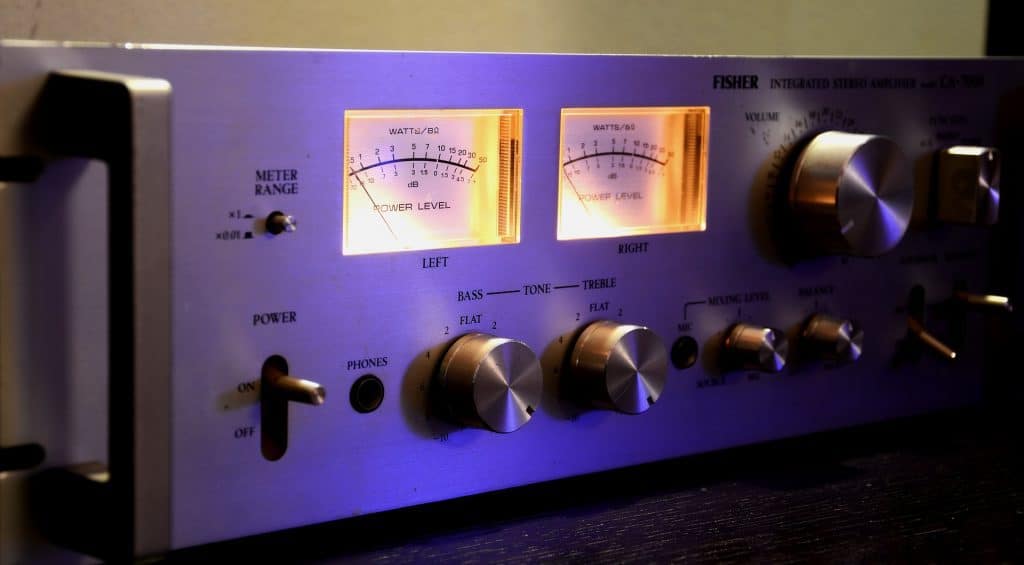 Before we get into the various methods you can use to connect one amplifier to another amplifier, you need to establish the reason this is necessary.

Although it may seem logical that hooking up a pair of amplifiers would provide you with double the output power, sadly that’s not the case.

It’s impossible to multiply the power of an amplifier by connecting it to another.

This is mainly because of the input that you would need to send the output of one device to the input of another, which isn’t designed to handle that amount of power. This could cause damage to the amp that is receiving the signal, so you avoid attempting it.

There are several reasons that someone may feel the need to connect one amplifier to another.

Perhaps it’s simply to compare the sound of two amplifiers to determine which would be the best one to use as part of an audio system. Likewise, you may want to assess the way two amplifiers interact with particular speakers or a receiver.

Another reason that this may be necessary, is because you’ve already decided that you enjoy the sound produced by two separate amplifiers, and therefore want to integrate them both into your audio rig so that you can use them at separate times depending on the music or audio you are listening to.

If you have a surround sound setup, connecting an amplifier to another amplifier would allow you to integrate dedicated amps for movie audio and music.

This means you can tailor settings such as EQ or panning to suit the type of audio you are listening to at any given time.

All of the potential reasons I’ve just listed assume that you don’t want to use two amplifiers simultaneously, but rather have the option of using one at a time. If you do want to use two amps at the same time, some methods facilitate this. I’ll dive into those in later sections.

As I mentioned previously, there are three main options you can choose from for connecting an amplifier to another amplifier. These involve:

If you would like to connect two amplifiers to a set of speakers, only using one of them at a time, this first method will facilitate this. If, on the other hand, you want to use both amplifiers simultaneously, you’ll find the latter two options to be more appropriate.

The process of connecting two amps using an amplifier switch is fairly straightforward.

Amplifier switches are compact units that allow you to quickly move between two amps by activating a switch mechanism.

If you’re hoping to use both amps at the same time, increase the volume of your system or supply additional power, using an amplifier switch is probably not the right option for you. This method simply allows you to use either one of the two amplifiers with your set of speakers at varying times.

The first thing you’ll need to do is acquire an amplifier switch.

It’s vitally important that you choose the correct type of switch, otherwise, it may be rendered useless.

The switch needs to be labeled as “break before make”, which essentially means that before it forms a connection with one amplifier, it breaks the connection with the other.

Selecting a “break before make” switch will ensure that your amplifiers are protected. If you choose a different type of amplifier switch, there is a chance that it could cause your equipment to be damaged beyond repair!

Once you’ve found a worthy switch, hooking it up to the two amplifiers is simple.

The switch should have two connectors specifically for connecting two amplifiers. These will likely be labeled as “input”. Also, there will be an “output” section, for connecting the switch to your speakers.

To connect the switch to your amplifiers, simply take some speaker wire from one amp into the first input on the switch unit. Ensure that you connect it to the correct choice of right or left, positive or negative.

Secondly, you’ll need to perform the same action but this time connect the speaker wire to the second amplifier and the second input on the switch unit.

Finally, you’ll need to run some more speaker cable from the output connector on the amp switch, to the speakers. Again, ensure that you wire them up to their correct inputs and outputs.

If you’ve performed these three steps correctly, you should now be able t0 choose between the two amplifiers by using the switch mechanism. You could even take it a step further and wire up an additional set of loudspeakers so that you can switch between amps and speakers.

You must avoid running speaker wire from a pair of amplifiers to a single set of speakers at the same time. If you do this without using a suitable amp switch, you run the risk of seriously damaging the speakers!

Take a look at this YouTube video for more information on make or break switches.

Another fairly simple method you can use for connecting one amplifier to another amplifier is by employing an active crossover.

This device separates the high-end frequencies of the audio from the bass frequencies so that they can be sent to separate amps and thus different speakers.

Many modern hi-fi speakers have a crossover built-in. However, an active crossover is required to connect two amps. These are standalone devices, which are situated between the amplifier and the preamp.

You’ll likely gain additional volume, a better and more deliberate tone, improved clarity, and in the process, you’ll minimize the risk of distortion.

The bass frequencies in particular will benefit from having their amplifier dedicated solely to driving the low-end, which is the frequency band that requires the most power.

Last but by no means least, you could use a surround sound processing unit to connect two amplifiers. If you’ve got surround sound speakers set up, this method is likely to be ideally suited to you.

For any surround sound system to function, it requires a processor. This device splits the audio signal into several channels, creating the immersive effect of the sounds being played from different locations around a room.

In most cases, the amplifier and the receiver are built into the surround sound system already, However, you might require a second amplifier to provide you with more flexibility and control over the audio.

Connecting two amplifiers to a surround sound processor shouldn’t be too difficult, but the exact methodology used will vary depending on the specifics of your system. Essentially, you need to connect the receiver’s “Pre Out”  to the inputs on the respective amplifiers.

Here’s a summary of the three listed methods:

Can you use two amps with one subwoofer?

If you’re using a single voice coil subwoofer, connecting two amplifiers will likely fry the outputs when it is turned on. If you use a dual voice subwoofer, this will allow you to use two amplifiers.

Can you daisy chain passive speakers with one amp?

Providing the speaker has the appropriate outputs, you can send the signal to a passive speaker. All that you need to do is connect the output of one speaker to the input of the second speaker.

Do I need an amplifier for my speakers to work?

All speakers require an amp to effectively playback audio, but some come with one preinstalled. Other speakers will require you to purchase an external amplifier to function properly.