Vinyl records have experienced a resurgence in recent years, with sales increasing and more listeners choosing this medium over digital options. DJ Turntables are designed for mixing records, but can also be used solely for listening to music.

Are DJ turntables good for listening?

DJ turntables are different from regular record players in many ways, but they still perform well solely for the purpose of listening. A significant difference is that turntables generally use direct drive, while most conventional record players use belt drive.

Conventional record players are focused purely on listening. The individual components which make up the DJ turntable will largely determine how effective it is for listening to music compared to a regular vinyl player.

I’ll explore this topic in detail throughout this guide. 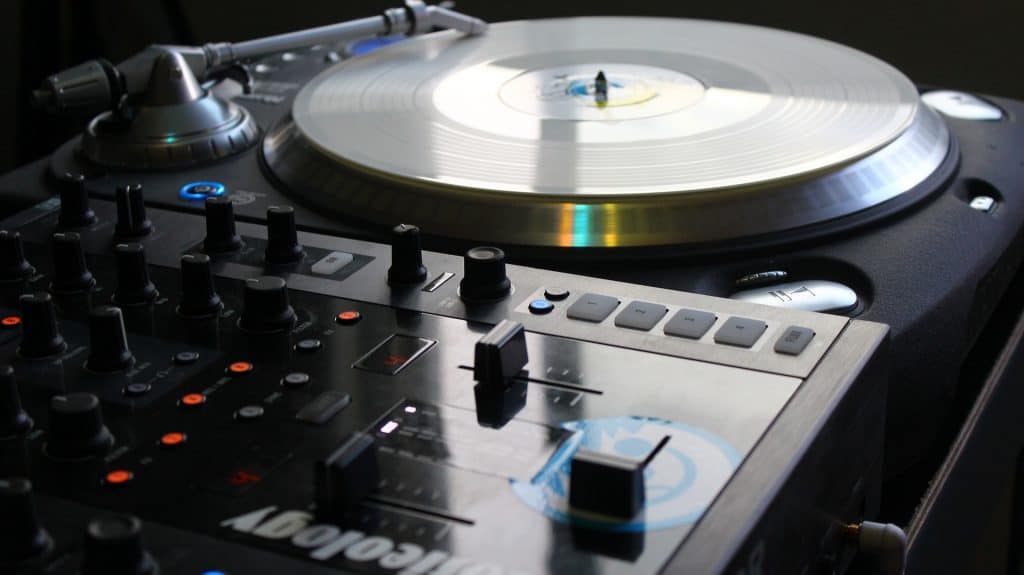 The terms “turntable” and “record player” are commonly used to describe the same thing. However, there are key differences between the two devices. Turntables historically have been used by disk jockeys to mix separate songs, in real-time. Record players, as the name suggests, are devices designed solely to listen to music.

Vinyl is considered by many to be the superior format for listening to music.

In the modern era, much of the music we find on streaming platforms or in other digital media is compressed into smaller files such as MP3s. This process involves reducing the peaks and troughs of the audio waveform, which is great for speed and saving space.

However, audiophiles argue that listening to records can’t be beaten.

There is something very distinctive about the warm sound of vinyl. The signature crackling sound it produces, and the physical element are unique and refreshing, especially when we’ve gotten so accustomed to digital alternatives.

DJ turntables and regular record players share the same core purpose. They use a needle to read the grooves of the vinyl, transmitting this as an audio signal to an amplifier, and playing the music back through speakers.

Nevertheless, there are some key differences between these two devices. These differences don’t necessarily result in different sound quality or listening experiences, but rather, they are apparent in terms of functionality.

Due to the similarities between DJ turntables and regular vinyl record players, it’s safe to say that the former is indeed a good choice for simply listening to music. They essentially use the same means to produce sound, and the same technology is at the core of both devices.

With that being said, turntables include some additional features that have the specific purpose of making it easier to mix and manipulate the audio. They often include some digital functions too.

The Differences Between DJ Turntables and Record Players

To understand the key differences between turntables for Djing and conventional record players, we need to look at the basics of these devices. A turntable is simply the name given to the circular platform which rotates at a certain speed so that the needle can move through the grooves and produce sound.

There are three main speeds that turntables can be played at, which depend on the dimensions of the vinyl record. These are:

Regardless of whether you are using a DJ turntable or a turntable on a regular vinyl player, the same process occurs.

When the record is placed on the ground surface, it moves underneath a needle. This needle essentially reads the grooves which are etched into the record.

The sonic vibrations are then created due to the interaction between the needle and the grooves. They are transmitted through the metal arm, in which a device known as a cartridge resides.

Cartridges are made from coils, which work within a magnetic field, much like the pickups on an electric guitar.

This magnetic field transforms the vibrational energy from the vinyl into electronic audio signals which can then be amplified and played back through a speaker.

This incredibly sophisticated process occurs identically whether you’re using DJ turntables or vintage-style record players. Therefore, there is very little difference in the quality of the listening experience.

DJ turntables must be used with an amplifier and speakers, otherwise, they are rendered redundant. The same can be said for regular record players. This is because the audio signal is too quiet to be played through the speakers before it is amplified, and without speakers, there would be no outlet for the sound.

DJ turntables tend to have significantly more features than standard record players. These features are likely to include:

The only two factors that could arguably make DJ turntables less good for listening are the direct drive and the possibility for overcomplication due to more controls and features. However, these are only likely to change the results minimally.

DJ turntables are generally more expensive than regular record players, partly because they offer additional features, but also because they are built more robustly and use higher quality components. They must be capable of withstanding the inevitable rigors of being transported from set to set, and the physical, hand-on nature of DJing.

Here is a breakdown of the key differences:

One of the key differences between conventional record players and DJ-specific devices is that the former tends to use a belt-drive mechanism, while the latter relies on a direct drive. These two technologies achieve the same result, but they are fit for different purposes.

This causes the round surface to be rotated directly from the contact with the motor. Belt drive record players, on the other hand, feature an offset motor. They use a thin belt that is wrapped around the spindle, which acts as a pulley, rotating the turntable.

This is where the question of how good are DJ turntables for simply listening to music gets interesting. There are obvious benefits to using a direct drive over a belt-drive, some of which do impact the listening experience and others that are more anecdotal.

Direct drive DJ turntables have a higher torque. This results in a fast start-up speed and makes them less susceptible to being adjusted or moved by factors like the weight of the stylus, or the contact between the needle and the record’s grooves.

Undesirable movements are one of the main causes of poor sound quality from a record player.

This can cause the pitch to alter slightly, or make certain parts of the rotation spike or reduce in terms of dynamics. For this reason, direct-drive Dj turntables are considered to be more reliable due to their increased sturdiness.

The other reason that Dj turntables predominantly use direct drive is that it facilitates other aspects of the art form. For example, it allows the DJs to stop the record with their hand, and rewind it to align two separate tracks. This process is commonly known as “beatmatching”.

Using a regular record player for beatmatching would be incredibly hard. First of all, the belt drive is not designed to be moved manually, and this could result in damage to both the needle and potentially the record.

General vinyl players feature a platter that is attached to the motor. This means that the electronic vibrations are sent directly from one device to the next. They are then transmitted to the cartridge. In early players, this resulted in some distortion issues.

From our findings, it’s clear that Dj turntables are good options purely for listening to music. Nevertheless, it’s important to note that their suitability varies largely depending on the model you choose.

High-end DJ turntables, like those produced by Technics, for example, are likely to perform just as capably as a record player to listen to music. Cheaper, more flimsy DJ turntables will potentially leave you disappointed.

It’s important to research the manufacturer and the model of the DJ turntable before purchasing. Providing you have a decent turntable, there’s no reason why you shouldn’t use it for listening to music as well as DJing.

Vinyl records wear down the more they are played. For this reason, DJing is likely to speed up this process as the records will be used more often in some cases. Making sure your needle and belt are in good condition slows down this process.

Do you need a mixer to DJ?

DJ record players can be used without a mixer, but only if you are using one vinyl at a time. Once a second record is introduced, you’ll require a mixer to blend the two tracks and to control their levels.

How do I know what speed to play my record at?