The resurgence of vinyl over the past decade or so has seen an increased interest in record players. Suitcase turntables have become increasingly popular, due to their stylish aesthetics and practical designs.

As the market has become more saturated, there has been an increase in sub-par suitcase turntables. Despite this, there are a select few which rival traditional record players in terms of their performance, sound quality, and other important aspects.

Appearances can be deceiving when it comes to record players.

It might be tempting to choose a suitcase turntable because it looks good, but if it is likely to damage your records or the sound quality it offers isn’t of a high standard, you’ll be left disappointed.

In this guide, I’ll explain the pros and cons of suitcase record players so that you can decide whether they’re right for you.

Suitcase record players have become a popular alternative to conventional turntables. Their popularity is a result of their convenience, aesthetical design, and the fact that they tend to take up very little space compared to bulkier record players.

Those attributes are undisputable, but a good record player must also offer other important qualities. Durability is a key factor, as is the record player’s tendency to damage vinyl records due to poor designs or lesser quality components.

In theory, there are certain things you could do the improve the performance of a suitcase record player, Replacing the needle, checking the cables, and pairing the device with a high-end amplifier and speakers will undoubtedly have a positive effect.

In some cases, it may end up being more expensive to install new components on a suitcase record player than to invest in one that is a little more expensive but is superior in quality.

Suitcase record players could potentially damage vinyl records, but this depends on the quality of the particular model. In the same breath, conventional turntables can also damage records, it simply depends on their quality.

The stylus is a needle that comes into contact with the vinyl record. There are many different materials used for constructing a stylus, but the majority opinion is that diamond is the premium standard. Other materials, such as sapphire are also commonly used on high-quality styluses.

A cheap suitcase record player is likely to have a low-quality stylus. This means that after a relatively short time, the needle will begin to wear out as a result of the friction caused as the vinyl moves around the turntable.

It’s a little unfair to single out suitcase turntables as the main culprit for causing damage to vinyl records, when in fact, it is more a result of a low-quality stylus or one that has been overused and needs replacing.

Replacing a stylus is very easy, and there are many good options available. If you’re worried that your suitcase vinyl player may be wearing out some of your records, it’s worth considering installing a new stylus on the device.

Spending a little extra to get a better quality stylus will improve the longevity of the needle, and is likely to need replacing less often. This will also help to prevent any damage to your vinyl records, and enhance the overall performance of your suitcase record player.

Are There Any Good Suitcase Record Players?

A quick search of the internet will present you with hundreds of suitcase record players.

The saturated market can make it very difficult to identify a good quality device. Most audiophiles will tell you that conventional record players are generally better than suitcase record players, but this doesn’t mean that there aren’t any good options out there.

As the popularity of suitcase record players has increased, a selection of manufacturers has emerged as the leading producers of these convenient devices. Some of these brands have a long history of producing record players, while others are relatively newly established.

Victrola, who I will cover in more detail later in this article, is considered as one of the best manufacturers of suitcase record players. Additionally, brands like Music Public Kingdom and Crosley also have a solid reputation based on the quality of their suitcase turntables. 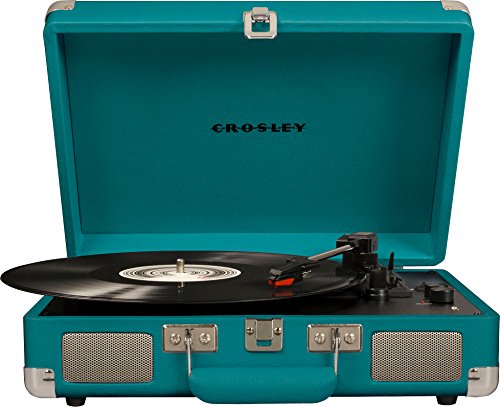 Similar to musical instruments or amplifiers, it’s a case of sifting through the average and sub-par offerings to find the ones that are of exceptional quality. It may be true that standardly designed record players are better than suitcase record players on average, but there are certainly some exceptions to this rule.

Victrola is regarded as one of the leading manufacturers of record players, and they produce a range of suitcase models. The brand has a long history in the audio industry which spans back to the early 1900s.

It’s a testament to the quality of Victrola’s products that they have withstood many changes and developments in audio technology. One of the mediums which have remained relatively unchanged is vinyl record players, and that is what they are best known for.

Victrola’s suitcase record players are often designed with vintage aesthetics, as is evident with the popular VSC-550BT. This particular model has built-in speakers and is designed to blend portability with durability. 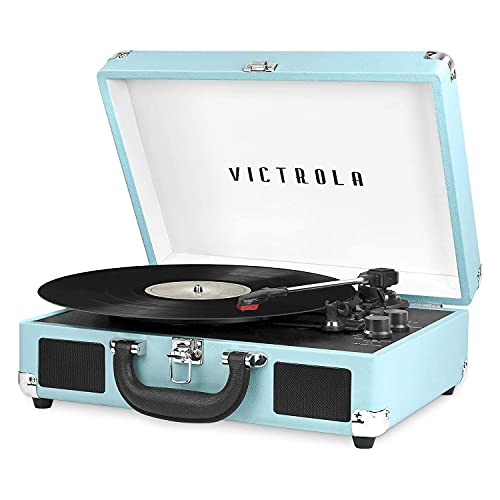 One of the major selling points of Victrola’s suitcase turntables is that they are belt-driven, and are capable of playing records at three different speeds. This level of functionality rivals traditionally designed record players.

Although they feature a vintage design, there are many modern components installed on Victrola’s suitcase record players. This includes connectivity to the speakers via Bluetooth, in addition to stereo RCA outputs and headphone jacks.

The main selling point of any suitcase record player is their mobility. Victrola ensures that the cases can be securely closed when the record player is in transit, which protects the inner components from being moved around and potentially damaged when they are taken from one place to another.

A common criticism of Victrola’s suitcase record players is that the needles they come with are often not of the highest standard, but this is to be expected with any affordable record player.

There’s no denying that fairly cheap suitcase turntables are simply not going to perform to the standard of a high-end conventional record player. The components are certainly of lesser quality, as manufacturers like Victrola have to keep the cost down to make their products affordable.

However, for the price, Victrola’s suitcase turntables are great options for those who want a conveniently sized device for playing their vinyl records. They come ready to play music, without the need for any external devices, but you can improve them by using an amplifier or speakers of your choice.

If you have ever wondered if DJ Turntables are good for listening you can find more information by reading this article.

Is it ok to touch vinyl records?

When handling vinyl records, it’s important to try to only touch the outer edge. This prevents dirt and oils from getting onto the vinyl, which could cause damage and affect the way it sounds.

When should I replace the needle on my record player?

The most common sign that you need to replace the needle on your record player is when it skips forward or bounces along the surface of the vinyl. You can check the condition of the needle and see if it has become frayed or dirty too.

Is vinyl better quality than CD?

Technically speaking, CDs have a better audio quality than vinyl records. Despite this, many listeners prefer the sound of vinyl, as it tends to be warmer due to the natural characteristics of analog recordings compared to digital recordings.