The most widely used light in show business is the par can light. Whether it’s for stage lighting or for outdoor locations, every company dedicated to music & sound will offer them to you.

The name Parabolic Aluminized Reflector (PAR) doesn’t ring a bell, does it? Well, this is exactly what PAR stands for.

So, what is a Par Can light?

A Par Can Light is a lamp that generates a highly directional light beam, because of this function particularity, they are the favourite of stages around the world for illuminating a single person or event. They are also the choice of aircraft, locomotives, architecture, lighthouses and cars.

After working in the industry for many years I got to see hundreds of people renting the equipment they didn’t like or understand, I decided to create this post and tell you everything about par can lights so you can make an informed decision about whether they are actually what you require for your lighting set-up.

There’s a lot that can be said about a par can light and we are going to cover as much info as possible.

Read on and learn everything you always wanted to know about par can lights.

Par Can Light, A Little History (This Is Important)

The term par can came after it was already in use in the world, almost thirty years after to be precise. The first uses of par can lights can be traced all the way to the 1950s in the USA according to Eurolite.

The first use was in outdoors architectural illumination. They were, at the time, covered in a very rugged Pyrex glass to endure the water pouring over them.

After successfully illuminating the World Fair held in New York City in 1964, and pushed forward by Charlie Altman, par can lights hit the main stages of the world during the 1970s and 1980s.

Van Halen, the eighties metal band travelled the world during their 1978 and 1979 tour carrying with them 1000 par can lights to make a dramatic, unprecedented light show for their fans.

Now, in the 21st century, it is possible to find par can lights in homes, aircraft, cars, locomotives and especially in most stages around the world. From Madison Square Garden to your local small, independent, 20-seat theatre room; you will very likely find several kinds of par can lights adding light to the scene. 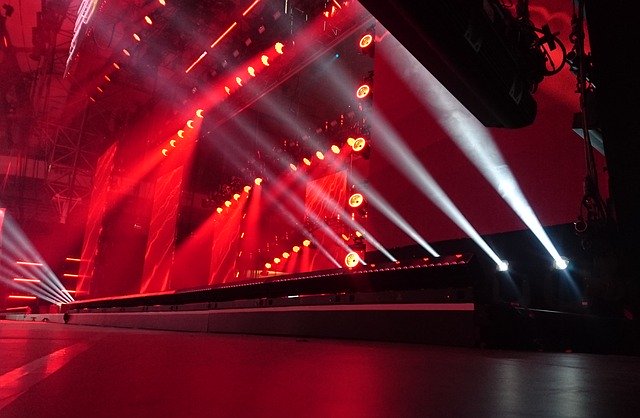 How Do Par Can Lights Work?

The idea behind a par can light is very simple and yet so effective that it survived half a century unmodified. Let’s take a look at the ingredients in this kind of lamp:

These three elements are usually part of the same unit except for big par can lights like PAR56 or PAR64. Because of the intensive use and the size of it, the creation of par can lights with replaceable independent parts made the costs of repairing them much lower.

Here’s a basic video explaining many different Par Can Lights.

What Are The Main Uses Of Par Can Lights?

Par can lights are used for plenty of endeavours that you might not even know about. Let’s take a look at some of the most common ones.

This is the main use for what we know as par can lights.

Most theatres in the world have, at this moment, several par can lights hanging from the ceiling to provide stage lighting for the plays. Also, musical spectacles benefit from these kinds of lights.

These lights usually have different colour gels applied to generate moods, climates and transitions. For example, it is common to use very cold dark blue gel between acts and yellow and red gels to give warmth to the scenes.

Compared to other lighting equipment used in large stages, par can lights are inexpensive and you can always see a number of them to do washes or extra-focused white light positioning. It is not common to see them as Front of House lights, but whenever extreme angles, special effects or straight from above illumination is needed, you will very likely find par can lights fulfilling these duties.

It is very common to come across PAR64 lamps with 250, 500 or 1000 watts to do single-person lighting. I can’t begin to explain to you just how much fun it is to sit on those floating seats and point at performers with a 1000-watt PAR64.

Different Types Of Par Can Lights

Not all par can lights are the same; their different features can be divided into categories and then used in different endeavours.

When we divide par can lights by their diameter we can say that they range from 16 to 64, which would mean from 50 to 200 mm of diameter. If you are familiar with theatre jargon, then you might know the PAR16s as “birdies”. Depending on the diameter, par lights have different uses. For example, you will never fit a PAR64 in a small stage and “birdies” get lost in big stages.

In stage lighting not everything is about the diameter of the par can, but also about the geometry of the parabolic reflection. It is possible to generate a narrow spot with the light or a wide flood depending on the angle. They go from VNSP (very narrow spot) to WFL (wide flood) with angles ranging from 12 to 70 respectively.

Every par can light has a light source inside which has a certain power measured in watts. Not all par can lights sizes are available in every wattage size. For example, you can´t fit a 1000-watt light source to a PAR36 but you can do it with a PAR64. Available power usually goes from 30 watts all the way to 1000.

From the combination of these qualities, you can measure the overall power and hence final result of having that par can light install.

To LED or not to LED?

Nowadays stage lighting with par can light is mostly based on LED light sources.

LED technology took over the market by storm and, truth be told, they are very reliable and consume a fraction of what other technologies do.

LED lights can be found in combinations to create colours making the use of par can lights even easier on stage. I’ve worked with LED-driven par can lights and you don´t notice the difference until you see the electricity bill at the end of the month! LED is much cheaper to run!

We’ve been through what a par can lights are used for, the different shapes and sizes used for stage lighting and the different parts and technologies used for their construction. I hope this clears out all your doubts about the most common lighting elements found in stages all over the world.

Those of us who have been in the entertainment business have seen many technologies come and go. What I have never seen is a spectacle with a decent lighting system and no par can lights in it. Yes, I know that stroboscopic and laser lights are capable of very cool effects and also mapping, but there is something about par can lights that will just never fade away.