In comparison to guitar, vocal, or keyboard amplifiers, bass amps require significantly more power. Amps are designed to reproduce the frequencies of a particular instrument and project the sound.

So, why do bass amps need more wattage?

Bass amps need more wattage because low-end frequency waveforms are longer, and require more power to push out of the speaker. The Bass guitar is rich with these low-end frequencies, and therefore, a bass amp needs adequate power to amplify the prominent tones produced by the instrument.

That’s the simple answer, but as with the subjects of audio technology, there is much more to consider. In addition to the extra power that bass amps require to project low-end frequencies, there are also other psychoacoustic reasons for the increased wattage. To fully understand why the extra power is necessary, we need to analyze the way bass amps work. 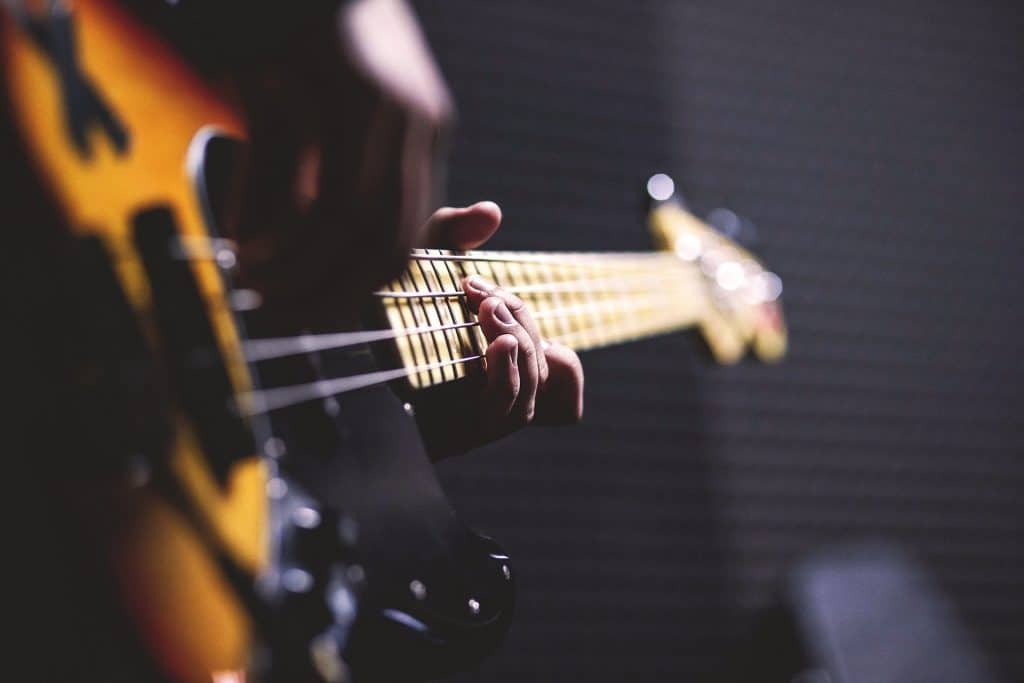 The majority of guitar amps require between 15-100 watts of power to successfully operate.

Small practice amps are found at one end of this spectrum, while larger tube amplifiers used for playing in huge venues are found at the other end. Bass amplifiers also differ greatly in terms of wattage, depending on their size and design.

On the whole, however, it’s quite clear that bass amplifiers need significantly more wattage than their guitar, keyboard, or vocal equivalents. It’s not uncommon to find a bass amp that requires 300-500 watts of power.

There are several reasons for the required increase in wattage, but the main one is related to low-end frequencies.

So why does this correlate to the need for more wattage of a bass amp?

Amplifiers push the sound out of a speaker, or a series of speakers. These sounds are waveforms, the same as the ones you can visually see in your DAW when recording.

Here is an example of a good quality bass combo amp.

The pitch of a waveform directly changes its shape. High-end, treble frequencies have shorter waveforms, while bass-frequencies are much longer. The longer a waveform is, the more effort it requires from the amplifier to push it out of the speaker.

Here is a breakdown of the frequency range and wattage of amp types:

This explains why small guitar amplifiers require very little wattage, but they are still capable of reproducing the tones of the instrument with impressive clarity.

This video explains in detail the relationship between power, wattage, and volume in bass amps.

It’s important to note that wattage does not equate to volume or loudness. It is a measure of power.

A general rule is that the volume of an amplifier will be doubled with ten times the wattage. However, other factors impact this, including whether the amp is solid-state or of the tube variety.

Along with the requirement for increased wattage due to the prominent low-end frequencies produced by bass guitar, several other factors contribute to the additional power.

In many cases, another reason for the increased wattage of bass amps is the way that the power sections are designed. A guitar amp is usually full range, operating at, for example, a total of 50 watts. Bass amps, on the other hand, commonly combine multiple power sections into a single unit.

Power sections are used to power the different frequency bands of the amplifier. Electric guitar or vocals generally reside within a relatively narrow frequency band, and the lack of low-end presence means that amplifiers designed for those purposes don’t require more than one power section.

Conversely, bass amps are likely to split the power sections of the low and high frequencies. As an example, if a bass amp required a total of 400 watts, this might be because 100 watts are being used to power the high-frequency section, while the other 300 watts are used to power the low-end section.

The type of bass amp also directly impacts the wattage it requires.

This is where things can get a little confusing. There are two types of amplifiers for bass, guitar, keyboard, or vocals. These are known as solid-state, and tube amplifiers.

Check out this solid-state amp here on Amazon.

This is because tube amplifiers use significantly larger power transformers, and they also require individual output transformers to covert the high-voltage/low-current signal from their power tubes into a low-voltage/high current signal that is capable of driving the speaker.

This may seem illogical at first because one would assume that the higher wattage an amplifier requires, the more voltage it will use. Tube amplifiers are considered to be louder than their solid-state counterparts, and in most cases, this assumption is correct.

To illustrate this point further, if you have a low-wattage tube bass amp of 15 watts, it will be louder than a solid-state amplifier of 50 watts. Again, this relates to the frequency range that the amp is capable of reproducing, but it is also due to a phenomenon known as speaker impedance.

Speaker impedance describes the amount of resistance that a speaker produces to counteract the current that flows through it.

It is largely dependent on the nature of the prominent frequencies that are reproduced by the speaker. When the signal clips, a solid-state amplifier’s available power is significantly reduced, resulting in a higher speaker impedance but on the whole, less power.

Tube bass amps, on the other hand, are capable of producing upwards of 80% of their maximum power regardless of the frequencies produced by the instrument. They are also known for their ability to produce smoother, thick tones which are less harsh on the ears than solid-state amps.

The main reason that bass amps need more wattage is due to the longer waveforms that low-end frequencies produce. This requires additional power for the amplifier to push the waveforms out of the speaker cone so that they are audible. High-end frequencies require significantly less effort to be projected.

Another contributing factor is how the amplifier deals with harmonics and signal clipping.

Bass amps don’t just amplify the input that they receive from the pickups of the instrument. They also add a touch of coloration, which gives the bass amp its unique tone.

Unlike guitar amps, which conventionally use tubes to project their sound, high-wattage bass amps combine solid-state technology with the use of tubes.

Bass amps, on the other hand, don’t require the ability to break up as much as their guitar equivalents. Therefore, they use solid-state technology to ensure that the low-end frequencies sound consistent and don’t become overly distorted. It’s common that they also use tubes for power.

Solid-state bass amps are dynamic, meaning the volume changes depending on how hard you play the bass strings.

Tube amplifiers are even more responsive, and their volume and tone change due to the slightest differences in touch and playing style.

Can you amplify bass without a bass amp?

Although using a bass amp is undeniably the most effective way to amplify bass, there is an alternative method. Using a preamp or D.I box, you can send the signal from a bass guitar directly into a mixer, and out of the stage monitors.

Check out my article on D.I Boxes here.

How many watts are needed for live shows?

Generally speaking, a bass amp with at least 200 watts is required for playing medium or large venues. Any less than that is suitable for a practice amp, but the volume will likely be too low for playing live shows.

Do bass amps have built-in effects?

Tube bass amps seldom include onboard effects. Solid-state bass amps, on the other hand, are often designed with many inbuilt processing options. This may include compressors, EQ, and modulation-based effects like chorus or phasers.

Take a look at my article on recording Bass and Guitar here.