Smart TVs allow us to access streaming services, apps, and music. Pairing a smart TV with a mixer is a great way to maximize the audio quality that is produced when using it to watch films, television shows, or stream music.

How to connect a mixer to a smart TV-

To connect a mixer to a smart TV requires you to send the audio output from the TV to the relevant inputs on the mixer. You’ll need the correct audio cable that has dual ¼ inch jack connectors on one side, and on the other side, has dual RCA connectors. Additionally, the connection must be in stereo for the mixer to receive audio from the left and right of the smart TV.

Connecting a mixer to your smart TV may seem confusing at first, but once you understand which cables and plugs are required, it’s fairly straightforward.

In this guide, I’ll provide you with seven easy-to-follow instructions and help you to identify all of the equipment you’ll need. You can then use your mixer to get the best possible audio quality from your smart TV.

Step 1 – Locating The Outputs on Your Smart TV

Before you make the connection between your mixer and smart TV, you’ll need to establish which outputs you have at your disposal. On the back of the smart TV, you’ll find the control panel, which includes HDMI plugs, video inputs, and audio outputs.

The outputs you’re looking for will be located in the “audio out” section, labeled “Audio L” and “Audio R”. The left-sided output should be white, and the right-sided one should be red. These plugs are designed for RCA cables, which I’ll get into shortly.

HDMI cables are also used to transmit audio from the smart TV, and we’ll also be using this to connect to our mixer. HDMI cables also carry visual signals and are commonly connected to a computer, Fire Stick, or another device that streams videos.

Once you’ve successfully located the audio outputs and the HDMI plug on the back of the smart TV, it’s time to make sure you’ve got the right cables to connect them to your mixer’s inputs.

This table simplifies the outputs found on most smart TVs, and what they are used for.

To connect your smart TV to a mixer, you’ll need a specific type of audio cable. This cable has dual ¼ inch jack connectors on one side, and on the other side, it has dual RCA connectors.

This means that there is audio coming from both the left and right sides, as opposed to mono, where only a single audio signal is transmitted.

Another thing you’ll need to ensure is that the RCA/1/4-inch stereo jack cable is long enough to reach from the back of the smart TV to your mixer. You can get these cables in varying lengths, and the audio quality shouldn’t be affected if you need to use a longer cable.

Step 3 – Identifying the Inputs on Your Mixer

Although mixers vary in terms of the number of inputs and outputs they offer, even the most basic device should have two stereo inputs which can be used to connect to your smart TV.

The inputs are usually located across the top of the front control panel on the mixer. You’ll need to use a channel that has two stereo inputs so that you can plug the dual ¼-inch jack connectors into these.

At this stage, it’s also a good idea to figure out which controls, sliders and knobs affect the sound of the inputs that you have chosen. That way, you can avoid any mishaps when it comes to playing the audio from the smart TV through the mixer.

For more information on mixers take a look at this popular YouTube video.

RCA connectors tend to be a little fiddly, especially when plugging them into the back of a smart TV. Make sure that you’ve pushed them in full so that the connection is secure.

Next, take the other end of the cable which has dual ¼-inch jack connectors, and plug them into the stereo inputs of the mixer. You can either use the “Aux Line In” or the “Track Line In”.

Plug the ¼-inch jack cables into the stereo inputs you’ve chosen on the mixer and set the levels to zero before you turn it on. This will prevent any unexpected spikes in volume from occurring! 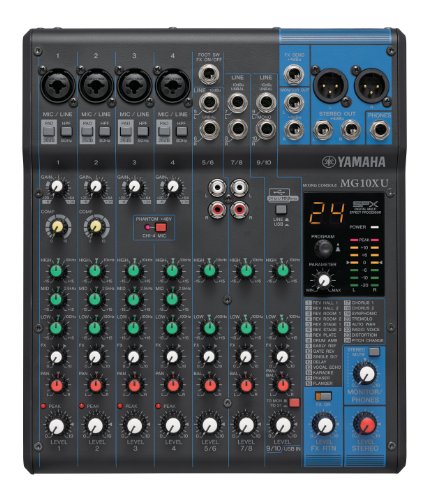 If you’re using a set of speakers or monitors to play the audio from the mixer, you’ll need to connect them at this stage to test whether the connection to the smart TV has been made.

The mixer should have clear “speaker out” or “mains out” plugs on its control panel. Using balanced cables preferably, connect these outputs to the inputs on your speakers. The volume faders on the speaker output channel should be turned up to a central value.

Now that the connection has been made from the TV to the mixer, you can turn on both of the devices. Cue up a video with audio on the TV, and press play. Next, adjust the level on the input channel on the mixer which the ¼-inch jacks are plugged into.

Gradually increase the volume until you can hear the audio from the video. If it is audible, your smart TV is now successfully connected to your mixer. The audio should be coming through your speakers.

The mixer should also be showing a green signal on the signal meter. This is an indicator that you have set the levels on the mixer to an optimal level. If the meter turns red, you’ll need to reduce the volume of the inputs to avoid distortion.

Additionally, mixers often include some onboard effects which can be a lot of fun to play around with. These effects may include reverb and delay. EQ is also commonly featured, and this is a valuable tool for tailoring the smart TV’s audio to your liking.

EQ controls are presented in the form of frequency bands. Each band represents a group of frequencies of the sound spectrum, for example, 20 Hz – 100 Hz, or 100 Hz – 500 Hz.

This is a good way to compensate for bass-heavy songs which perhaps sound muddy through your speakers or the audio from a movie that has too many prominent treble frequencies and therefore sounds harsh.

You can also plug a microphone into one of the XLR inputs on the mixer if you wish. For karaoke or singing practices, this is a great way to get live vocals through your speakers via the mixer, and you can sing along to the audio produced by the smart TV.

It’s also possible to adjust the panning of the smart TV’s audio using the controls on the mixer. This allows you to move the signal across the speakers in the stereo field. Additionally, you can take a line out of the mixer and record the audio signal from the smart TV.

I have also written a guide on connecting a mixer to an iPad. You can read it here.

Can you connect a mixer to a soundbar?

Some mixers have HDMI outputs, which allows them to be easily connected to a soundbar. Even if this connector is not offered, you can use auxiliary and RCA cables to connect the two devices.

What is a digital audio output on a smart TV?

A digital audio output is used to drive the audio signal into the input of an external audio device. This output can be used to connect a smart TV to a set of speakers, an amplifier, or a receiver.

Is a Smart TV’s optical audio better than HDMI?

HDMI cables can pass higher-resolution audio than optical audio connectors. This is why HDMI is considered the gold standard for modern high-definition audio and video transmission.