Preamps are great tools for improving the audio quality of recordings. They take the signal from a microphone or instrument and process it before it enters into the recording software.

Can a preamp drive headphones?

The important factor here is impedance.

To understand why it is not a good idea to use a preamp to drive headphones, we need to establish what impedance is, and why it plays a pivotal role.

If you were to attempt using headphones with a preamp, the audio signal would be significantly compromised, causing a drop in quality. However, there are alternatives, and in this article, we will cover all of the necessary information on the topic.

Check out the Beyerdynamic range of headphones here. (pictured below) These are a great choice for your home recording studio. 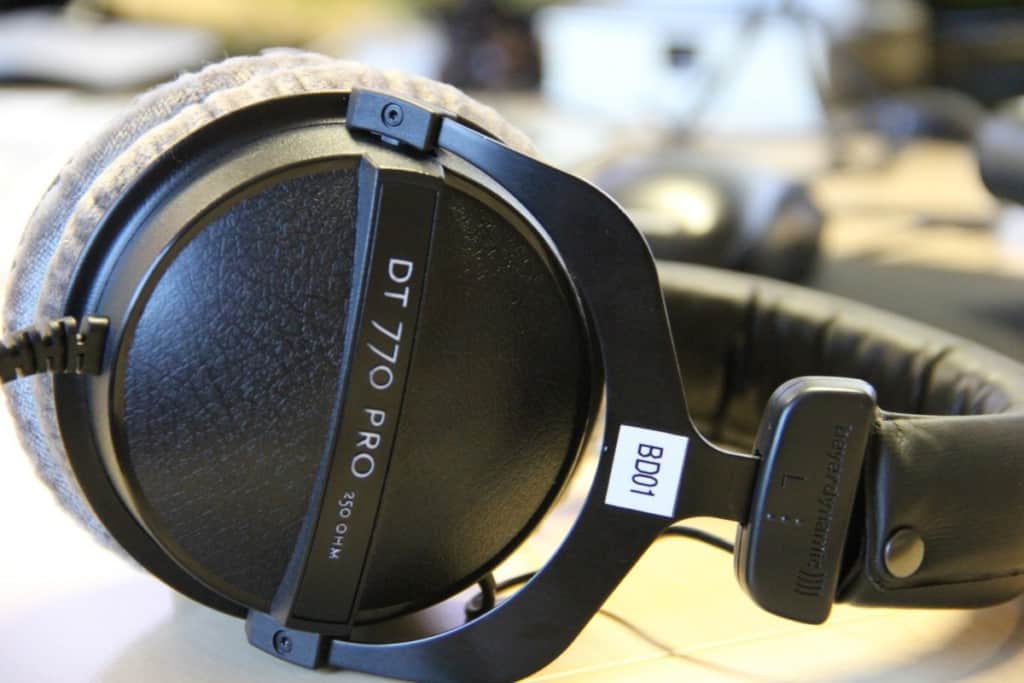 Why A Preamp Can’t Drive Headphones

As I previously mentioned, the main reason that a preamp cannot successfully drive headphones is impedance.

This refers to the way that any electronic device interacts with the flow of an alternating current. Impedance is measured in Ohms, and every single electronic device has an impedance rating, whether it be a piece of recording equipment or a household item.

Any form of an amplifier, whether it is a preamp, headphone amp, or power amp, will produce output impedance.

This rating indicates the amount of current that the receivers within the device are capable of handling. It might seem logical to think that a preamp can drive headphones because it produces high output impedance, so surely a relatively small device like headphones will pose no problems.

However, the opposite is true.

A preamp, with its higher output impedance, actually delivers a relatively low current in the form of an audio signal. A headphone amp, on the other hand, produces low output impedance, and thus, is better suited to powering them.

Take a look at this popular headphone amp on Amazon

In addition to output impedance, the inputs of preamps also have what is called input impedance.

Headphones also have input impedance, as do speakers. The difference between input and output impedances is that the input decides how much current is drawn from the device that is connected to it.

Let’s compare the impedance of headphones to the devices which are more commonly connected to a preamp.

These include power amps, headphone amps, or an audio interface. Each of the aforementioned devices has high input impedance when compared to the output impedance of the preamp.

This explains why a preamp cannot drive headphones successfully. The power imbalance will cause there to be a noticeable diminishment in signal strength, and therefore audio quality.

The headphones will demand a higher current from the preamp than it is capable of delivering. This results in several issues, which we will cover in the following section.

Take a look at this excellent video from PS Audio that discusses using a preamp for headphones.

What Happens If You Drive Headphones With A Preamp?

Although in theory, you could plug headphones into a preamp and there would be an audio output, it will be significantly compromised in terms of quality.

This is the main reason that using a preamp to drive headphones is a bad idea. As I explained, the impedance levels don’t match up, which causes the volume to be diminished to the point where it is barely audible.

Depending on the individual capabilities of the preamp and headphones you use, the volume level and audio signal quality will vary.

Preamps come with many different impedance levels, as do headphones. Therefore, some may provide a louder or clearer signal than others. Regardless, the audio will be too quiet for you to hear it in your headphones when it is driven by a preamp.

Frequency response is another issue that is likely to arise.

The impedance value of headphones changes depending on the frequency that they receive. This will result in inconsistent volume levels being played through the headphones if you connect them to a preamp.

If the frequency is around 100Hz, the headphone will produce an input impedance of around 60Ohms, whereas, at around 1 kHz, the input impedance will be somewhere around 50 Ohms.

Headphones are used for the audio quality that they provide.

To drive them with a preamp would be a waste of their ability to reproduce sounds with crisp, accurate clarity. Although the audio may be barely audible, it will not do the recording justice and is likely to frustrate the listener due to the constant fluctuations in quality and dynamics.

The Best Way To Drive Headphones

Now that we’ve established why you cannot drive headphones with a preamp, let’s discuss the alternative method which is much more effective.

Using a headphone amp is by far the best way to drive headphones. These devices are specifically designed to interact with headphones and produce the best possible audio quality while providing you with multiple options for tweaking the output.

In comparison to preamps which are designed to process audio before it is recorded or enters a mixer, the purpose of headphone amps is to amplify the audio signal so that it reaches the optimal level to be played through the headphones.

Without a headphone amp, the signal would be too weak for the headphones to successfully receive it.

Headphone amps can drive headphones much more efficiently and reliably than preamps.

With that being said, the headphone amp may need to be paired with another integral device to successfully amplify the audio signal. This device is known as a DAC, or digital-to-analog converter.

In the table below, you can see a comparison of preamps, headphone amps, and DACs.

Preamps, on the other hand, don’t have an inbuilt DAC.

This is another reason that they struggle to drive headphones. The role of a DAC is to take the digital signal, which at its primitive stage is simply a series of 0s and 1s, and then convert that signal into an analog waveform.

Headphones are only able to play analog waveforms, and therefore the DAC is a vital part of the process. More is required than just a DAC to drive headphones, though.

Alone, a DAC isn’t capable of boosting the signal to make it adequately strong enough for the headphones to receive it. This is where a headphone amp is required.

Unlike a preamp, headphone amps are designed specifically to drive headphones, taking over from the DAC after it has converted the signal from digital to analog.

All devices that are capable of audio playback are likely to have a DAC, and a headphone amp internally installed. However, manufacturers don’t usually focus a lot of effort on them, and so they can often be of a lesser quality compared to the other components that make up the playback device.

A good alternative to a preamp then would be to purchase both a standalone DAC and an external headphone amp.

For professional audio quality, this is the best setup.

The Headphone amp interacts with the DAC to amplify the converted signal, creating a clean, accurate representation of the audio wave with no sudden peaks and troughs in the dynamics, as would be the case when using a preamp to drive headphones.

Another advantage that headphone amps provide over preamps, is the control they allow you to have over various characteristics of the output.

Preamps sometimes feature tweakable parameters that can tailor the sound of a recording before it enters your interface or mixer, and are brilliant tools for that purpose.

A good Headphone Amp is likely to feature gain, volume, and sometimes onboard EQ units for adjusting the sound before it comes out of the headphones.

Take a look here at my choice for a top-quality headphone amp. 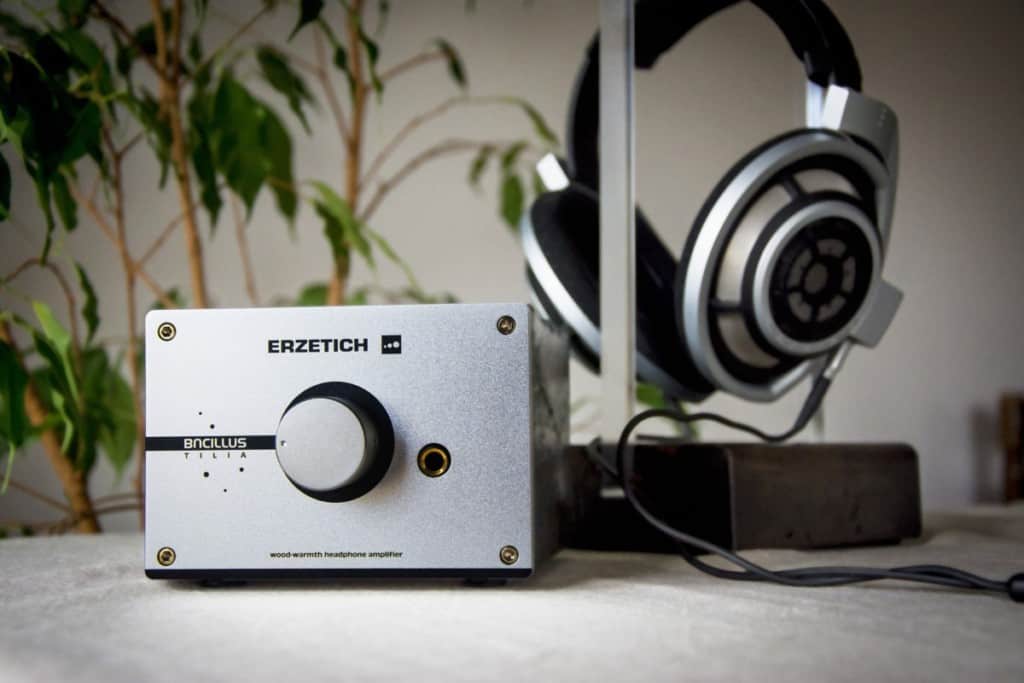 What are preamp pedals?

Preamp pedals are popular tools used by guitarists, bassists, and other musicians. They do the job of an amplifier, processing the sound, making it louder, and adding their unique character to the output.

There are some cases where using an external DAC may improve sound quality, but the results are likely to be minimal. Most devices have inbuilt DACs, and unless they are old, malfunctioning, or very cheap, purchasing a new one won’t have much of an effect.

Can you set individual levels with a headphone amp?

Yes, one of the great benefits of using headphone amps is that it allows you to create separate mixes for each musician in a band. The individual levels can then be set, and effects can be added to the outputs.

Check out my article on recording with headphone preamps here.

[…] the ohms, the lower the volume. Soundcards that are prepared for this case scenario usually have a headphone preamp attached to it so you can hear at a good volume with maximum […]