Recently I was asked this question and luckily I’ve been on both sides of the recording booth and have been producing and recording myself enough to know exactly which of these instruments to record first.

So, “Should you record drums or guitar first?”

For most traditional genres of music, always record the drums first. On the other hand, if you are into more atmospheric, ethereal, trip-hop music and want to record a trippy base to put a beat on top (or no beat at all) you should do the opposite. What is very important to bear in mind is that recording drums after harmonic instruments is very difficult and only some pro players can achieve it flawlessly.

Are you a guitar player? Are you a singer? Are you both? Are you simply a multi-talented player trying to cover more ground than you usually do with guitars and wonder what you should record first?

The question “should you record drums or guitar first” got me thinking a lot and I decided to create this article to share with you all the important differences of each approach and when it is best to do one thing or the other.

Are you ready? Let’s do this!

The Logics Of Band Recording

Recording a band is always more than just getting guitars, drums, basses, keys, and vocals on tape.

It’s about capturing a feeling that the band is able to create. Artists have this amazing talent of channeling high hopes and thin air and create masterpieces from it.

To give you an example, back in The Beatles days, they were not asking which to record first because there wasn’t such technology then, and all they could do was perform in front of an only mic in the middle of the room.

They would go for many, many takes, up to ninety in some songs. Legendary recording artist Jack White made an entire series based on this concept, you can check out this documentary.

After the multi-track tape was invented and then Pro Tools came along, the order of the instruments became a logic sequence. If you are a musician, you know that for most rhythms and music styles drums and bass are the spine of every song.

So, the logic of a band recording dictates that the spine will be the one to be laid down first.

Then you can go through the branches. Now, there are certain catches to this because otherwise drummers are always requested to play an amazing groovy part listening only to a guitar that is soulless and a discard take. That is not fair. It takes us to our next idea.

Communication Is A Must In Recording Studios

By communication, what we mean is musicians talking to each other. In a band situation, it should be upon common agreement how things are done. If you are a solo artist working in your home studio, there is absolutely no need for this, but otherwise, it is a crucial step.

There is one question that works like magic and it’s most of the time forgotten and goes like this: “who do you hear/follow the most?”

This simple answer gives us an idea of what to do to make that take wonderful. If the drummer listens to the singer a lot or the keyboard, everyone (within reason) should be playing to help him or her record.

Remember that a recording is not so much about the equipment, but more about the feeling you are able to capture. Between a professionally recorded, extremely adjusted to tempo take, and a soulful expression coming from the heart I can guarantee that the second will sell more records. Having both is the idea, right? This takes us to our third concept.

Rehearsals are the moment to practice all the parts, make the mistakes, and fine-tune the songs until they reach their ripe state.

Rehearsal time is invaluable and irreplaceable because it allows musicians to detach from the technical side and commit to the vibe, soul, and emotion of the performance within the song.

Practice doesn’t make perfect, practice makes beautiful. For a deeper take on our brains and practice time, you can check this TED lesson.

Why Most People Prefer To Record The Drums First?

So, given the option of recording the drums or the bass or the guitars first, why do most people choose the drums?

The drums are the ones leading the tempo; that is a fact.

At the same time, the whole band should be playing to a click. For starters, the drummer should follow the click and if he or she succeeds at this and does some wonderful takes with soul and vibe that sync up perfectly with the metronome, it could be enough for the rest of the band to play without it.

Believe me that playing with a metronome and drums or just drums it is drastically different. The resulting takes and the final track will have more freedom and looseness allowing songs to breathe and grow.

Difficulty Of Overdubs And Re-Recordings

Out of all the instruments that form a “traditional” band, drums are the most expensive and difficult to record of them all.

First, because you need a big room and many microphones to just record drum parts, and second because every microphone leaks on each other and hence, doing overdubs or re-recordings are always very complicated endeavors.

For example, if a guitar player misses a queue or plays the wrong chord, you can always edit that out and do an overdub or a rerecording but if a drummer misses a hit or a roll, then the whole song will need re-recording, most of the times, from the start.

Now, the perfect case scenario for a band is always to record as many instruments together as possible.

This is, perhaps, the only true way to capture the energy of the band playing live.

If you had the chance to watch Sound City, the movie by Dave Grohl about Seattle’s legendary studio, you might have noticed that Rage Against the Machine recorded their hit debut album there and brought friends and a PA inside the recording room to try to recreate the band’s live energy.

Well, that is the best-case scenario for a band. The only catch is that it takes a lot of rehearsal and a strong pre-production process to avoid tension and stress killing the vibe and thus, the songs.

What Kind Of Project Are You Working On?

Now, all of the above applies to band situations which are still the most common in the world. I deal with guitars, drums, basses, brass, keys, and vocals on a daily basis. Now, if you are not working on a project like these, there are some things we need to reconsider when we think about which to record first. 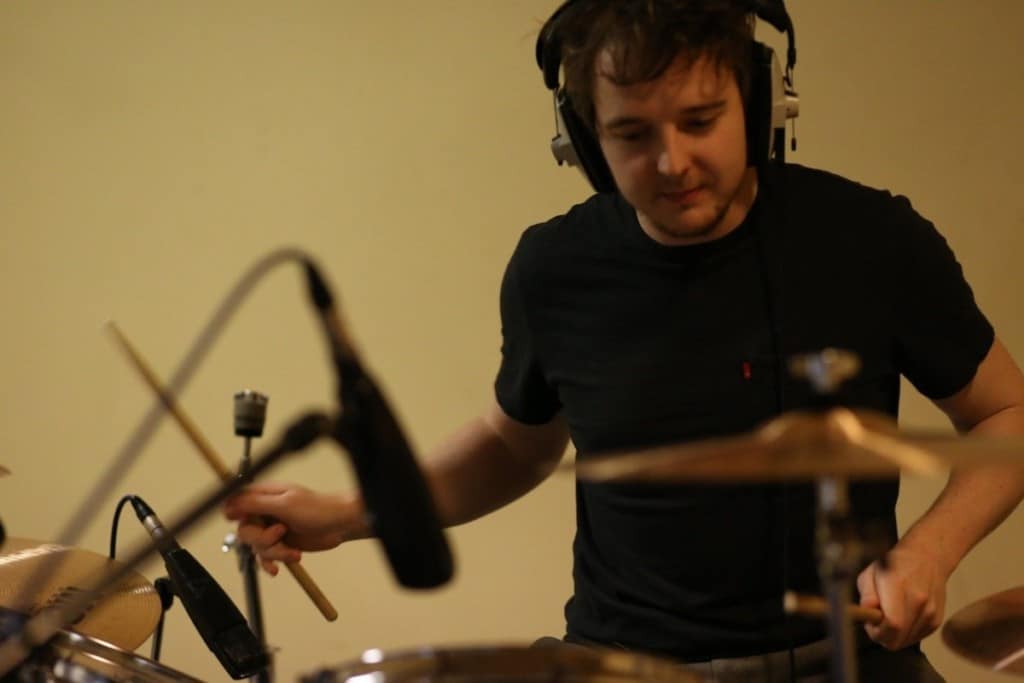 Do You Actually Have A Choice When Recording Drums And Guitar?

Well, my advice is to go for the basics: play with a metronome until you feel that the metronome and what you are playing are completely natural.

Then, if you are also a singer, try to do a two-mic setup. You can also plug the guitar through the line input. The important thing is that you do both at the same time and get both recorded. In short, you should mimic the live situation when you sing and play as much as possible.

This can be a great canvas to paint some other colors on as well, like for example, keyboards, drum machines, basses, and more.

Current Technology To Check Out

I use several different programs but one I can recommend a lot is EZ Drummer, a drumming program with a browser that allows you to go through different parts of songs and also do your own beats with a simple mouse.

There are many different virtual drumming programs out there; I encourage you to check them out because they can be very useful for your songwriter skills.

Check out my article on recording and mixing without monitors here. It may just come in handy one day!

The answer is (always) a metronome.

Whether you record guitars, drums, a flute, keyboards, a harmonica, or a mandolin, the scenario is mostly the same: you should always record to a metronome.

To this day I still practice parts with a metronome. And I don’t mean an app on my phone! Sometimes it’s nice to own something real.

Check out these metronomes on Amazon

If everyone in the band (even if that band is only you playing multiple things) respects the metronome and plays with it until it feels natural, the result will be a set of tracks that work great to build a song.

A well-used metronome can give you the tempo, the vibe, and the cohesion you need for your song to come to life.

I hope all the case scenarios we went through are helpful, you are not held back by these questions and release beautiful music to the world really soon.